Reading about Martin Scorsese and Leonardo DiCaprio‘s latest reported project, The Wager, has totally bummed me out.

Based on David Grann’s novel and set in the 1740s, the synopsis of The Wager sounds like a cousin of Mutiny on the Bounty off the coast of South America, and ending with a trial under the authority of the British Admiralty.

Which is also how Charles Nordhoff and James Norman Hall’s 1932 novel ended, with a court martial of main protagonist Roger Byam over his possible complicity in mutiny against Capt. William Bligh. 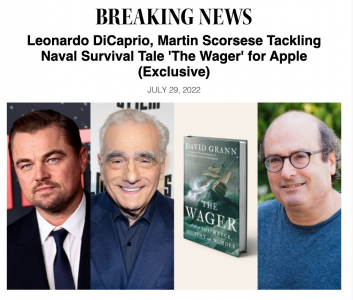 One, who wants to see another Mutiny on the Bounty-type film? Peter Weir‘s Master and Commander, Ron Howard‘s In The Heart of The Sea…aren’t we all kind of sick of that bounding-main shit? Suggestion: Instead of The Wager, Marty should remake Peter Ustinov‘s Billy Budd (’62). Seriously — a great moral-quandary film. (Melvyn Douglas: “I look around and I sense…finality.”)

Two, I don’t like it when Scorsese makes films about the storied past (The Age of Innocence, Silence, Kundun, Gangs of New York, The Aviator, Hugo). Shouldn’t he stick to movies about 20th Century criminals in the Northeastern region (New York, Philly, Boston), or at least about that general culture? How about a family drama set in Little Italy in the early 1960s — i.e., Mean Streets 2? Or one set in the present with Little Italy turned into a Disneyworld attraction?

Three, The Wager will cost at least $250 million to shoot, and will take forever to cut together. You know Marty — editing-wise he’s turning into Terrence Malick. And shooting a film on the high seas has always been a godawful headache each and every time. Who needs the grief?

Four, I hate to say this but Marty will turn 80 on 11.17.22. Does a guy his age really want to make something this demanding?

And five, what about Marty’s Grateful Dead movie with Jonah Hill? 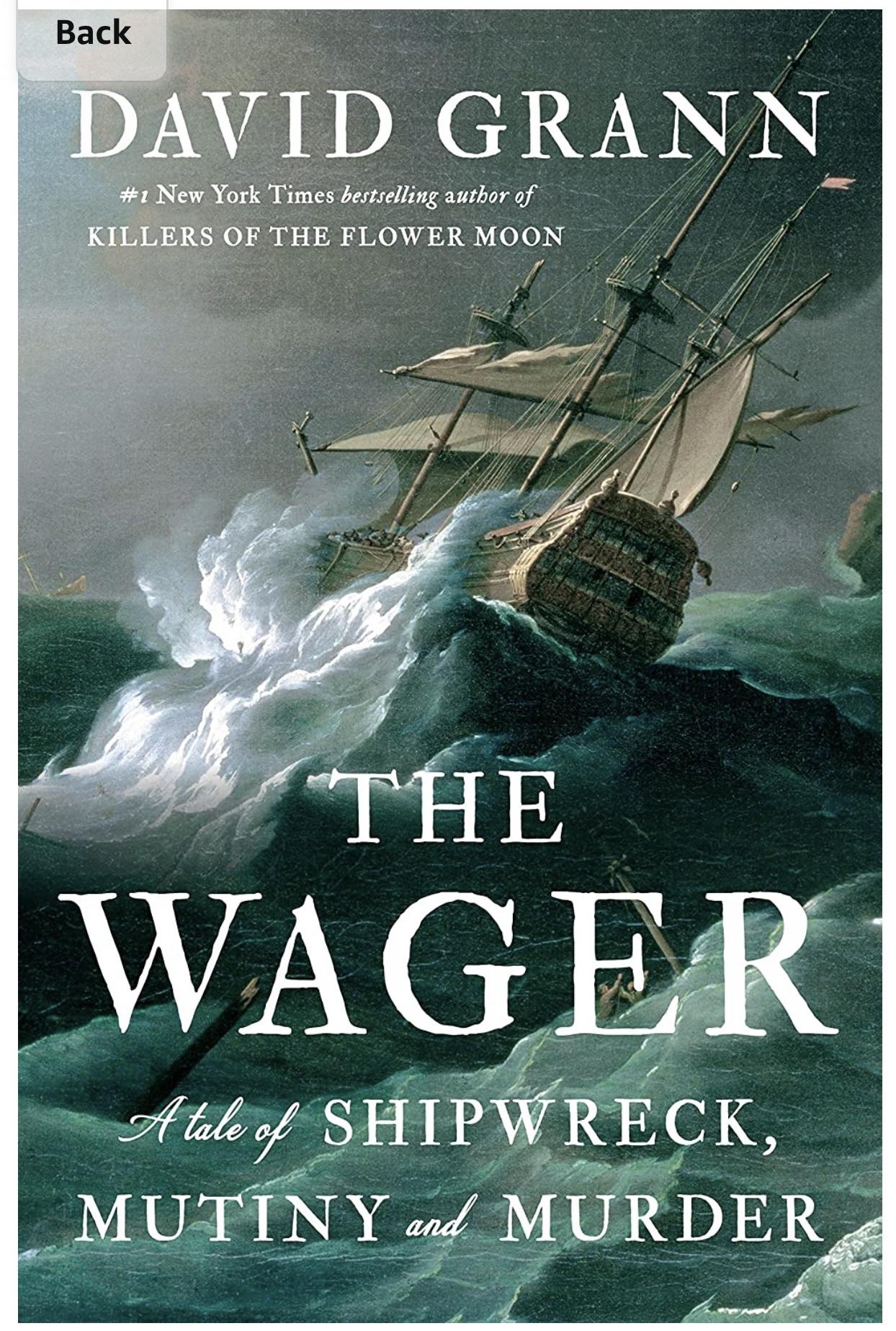 Yesterday I shared a concern about Maria Schrader‘s She Said (Universal, 11.18), which looks like a well-honed journalistic docudrama in the tradition of Spotlight. And yet the ’22 Venice Film Festival has blown it off, it wasn’t included in the initial TIFF rundown, and who knows about Telluride?

That’s because She Said has locked itself into an exclusive premiere with Eugene Hernandez‘s New York Film Festival, or so Indiewire‘s Anne Thompson, an impassioned voice of #MeToo wokester boosterism over the last five years, has suggested in a 7.29 Oscar forecast piece. 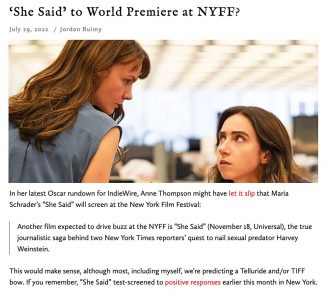 Thompson: “Another film expected to drive buzz at the NYFF is She Said, the true journalistic saga behind two New York Times reporters’ quest to nail sexual predator Harvey Weinstein, which launched the #MeToo movement and propelled the movie mogul into prison.

Robert Redford, Alan Pakula and William Goldman’s classic film opened 46 and 1/3 years ago. How many Academy members who were around back then are still filling out ballots? A few, I suppose.

I would love it if She Said plays Telluride first, of course, but the NYFF has always insisted on exclusive premieres, at least as far as award-season releases are concerned.

“I’ve spent the last three months replaying and understanding the nuances and the complexities of what happened in that moment. I’m not going to try and unpack all of that right now, but I can say to all of you that there is no part of me that thinks [the slap] was the right way to behave in that moment.

“I was fogged out at that point. It’s all fuzzy.

“I’ve reached out to Chris and the message that came back is that he’s not ready to talk. And when he is, he will reach out.

“To all my fellow nominees…you know, this is a community, [and] it’s like I won because you voted for me, and it really breaks my heart to have stolen and tarnished your moment…[and] ‘I’m sorry’ really isn’t sufficient.” — Will Smith in 7.29.22 video.

HE thoughts: Okay, you’re a decent, good-hearted person, we realize that, and you’re genuinely sorry, especially as far as Chris Rock and his family and friends are concerned. Fine.

Most of us, I’m presuming, have mulled it over and said to ourselves, “Wow, that was weird but whatever.” Slaps and punches are not stupendous tragedies in and of themselves. But the venue was inappropriate, to say the least.

So here we are four months later, and yet you’ve only been drilling down and deeply examining that moment for three months, you’re saying, or since late April. So after the most emotionally intense and chaotic moment of your life, or at least since your difficult youth in West Philly, you were avoiding the process of self-examination during the first four weeks?

But now, four months later, you’ve posted a contrite video, and one of your main statements is “I’m not going to try and unpack all of that right now.” You’re not? When do you think you might get around to that? Because that’s the thing you need to share.

Without any beating around the bush you need to answer a key question — “what the hell happened deep down, and more particularly why?”

Most of us are under an impression that your emotional eruption was fed by two simmering volcanoes — your dad’s tumultuous behavior when you were a kid**, and a long-simmering Will and Jada thing that you never quite put to bed. Maybe it’s something else but whatever it is, you need to dig down and just say it.

Like a complex character delivering a big hairball speech in the third act, you need to cough it up.

** One thing I wrote after the 3.27 Oscar telecast was “you can take the man out of West Philly, but you can’t take West Philly out of the man.”

The 94th Oscars happened four months ago (3.27.22), and it feels like four years. An ABC After-School Songbird Special (not a bad film, works here and there) won the Best Picture Oscar because the Academy just couldn’t with the grim, downerish Campion. The first streamer to nab the Big Prize is soft and deaf-positive and aspirational, and I will never, ever watch it again. There was only one takeaway from the ‘22 Oscar telecast, and I don’t even have to say it. Okay, there’s one other thing — the pain of watching Penelope Cruz, whose Pedro Almodovar-guided performance came entirely from within, losing to the hard-working Jessica Chastain, whose Tammy Faye performance was (one dinner-table moment aside) largely defined by eye makeup.

July 29, 2022 6:02 amby Jeffrey Wells
42 Comments
Stating A Statistical Fact Is Not In Itself Bigotry

…unless you’re stating this fact in the company of Type-A Millennials, in which case you are most definitely a bigot. Fair warning.

Unbelievable. 3 people on Fox panel calling another panelist “bigot” for stating basic facts about Monkey Pox. If you’re going to have a “conservative” network maybe don’t have em based in NYC pic.twitter.com/R44md79NEU

I’m not saying there’s a pat “lesson” to be derived from watching Julian Higgins‘ God’s Country, a violent, slow-burn, Straw Dogs-ian melodrama about an angry woke woman (Thandiwe Newton) getting into a territorial blood feud with a pair of yokel hunters who might as well be Trump supporters. But if you insist on a boiled-down message it would be something along the lines of “don’t fuck with the bumblefucks, but if you do fuck with them, you’d better be ready to go full Sam Peckinpah.”

God’s Country, a Sundance film that I saw and reviewed last January, opens on 9.16.

65 Comments
Not A Bad Look Exactly

… but at the same time I wouldn’t call it a good one. Because it suggests that Volodymir and Olena Zelensky have social aspirations. Which they’re allowed to have, of course, but it doesn’t feel right. Not in the midst of so much death and devastation. A bit unseemly. 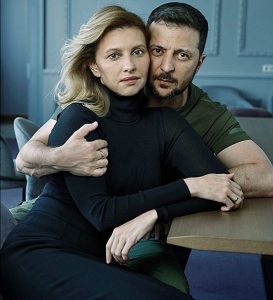 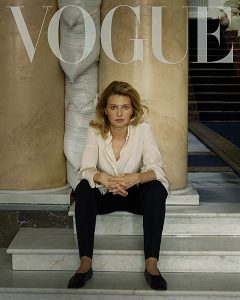 You can feel the warmth…it’s there. And I love Alexandre Desplat‘s score, and the voice of Ewan McGregor giving life and spirit to Jiminy Cricket.

Telluride Complications
World of Reel's Jordan Ruimy has posted a roster of films that won't, for whatever reason, be screening at Telluride '22. Here are a few:

In a 7.28 q & a with Variety‘s Brent Lang, TIFF honcho Cameron Bailey says that Steven Spielberg‘s The Fabelmans “is different from a typical Spielberg blockbuster, but it is just as easily impactful in terms of the emotional effect it’s going to have on people. If you love movies, this is going to be a very powerful film for you to watch.”

Which is almost precisely what a research-screening tipster told me yesterday afternoon: “Anyone who grew up watching movies will be a sure bet to love this. I think [even] Millennials will love it. It’s a film-critic-friendly movie. It’s made for people of the film faith. I enjoyed it tremendously, and this is so rare.” 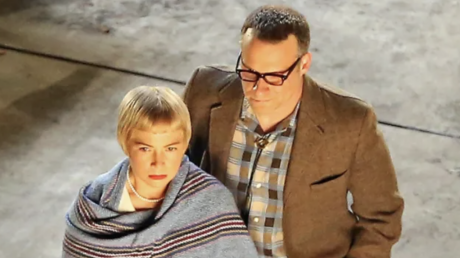 There’s a vague physical resemblance between the glistening, shimmering Marilyn Monroe of 60 and 70 years ago and the exquisitely coiffed, gowned and made-up Ana de Armas, even though the latter doesn’t really “look” like Norma Jean Baker, an unloved and abused daughter of average Midwestern Anglo-Saxon parents. Ana looks like a beautiful Cuban-born actress trying to do her best and mostly pulling it off, which is fine as far as it goes. Here’s hoping that Blonde, directed by Andrew Dominik and expected to be a difficult sit in some respects, shows up at Telluride after debuting in Venice. 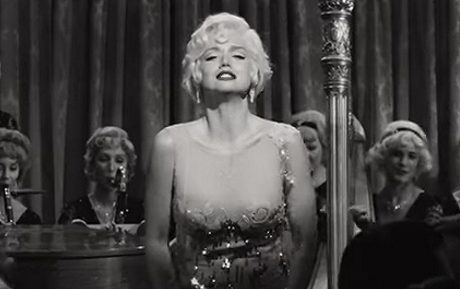 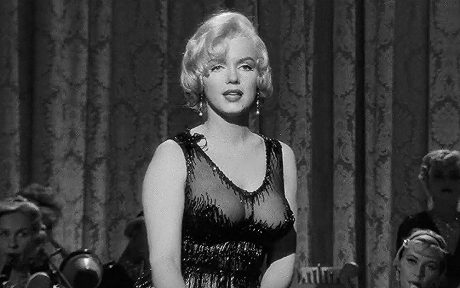