Attorney General Merrick Garland, a highly cautious man, didn’t want to say anything about the FBI Mar-a-Lago document raid or reveal the contents of the search warrant, but MAGA nutters have created such a stink since the raid that Garland has decided to unseal the search warrant, if only to take heat off the FBI.

Former President Donald Trump (aka Orange Plague) could have revealed the contents of the warrant any time since the raid, but he hasn’t.

“Given the intense public interest presented by a search of a residence of a former President, the government believes these factors favor unsealing the search warrant, its accompanying Attachments A and B, and the Property Receipt, absent objection from the former President.” — from DOJ motion to unseal Mar-a-Lago search warrant.

Obviously The Menu is a black social satire. The focus is on the repulsion that some gifted artists feel for consumers, including the rich elite. The idea, apparently, is that Slowik, the celebrity chef behind an exclusive restaurant called Hawthorne, is a sociopath. He’s probably a variation of Leslie Banks‘ “Count Zaroff” in The Most Dangerous Game (’32). The menu ingredients probably have something to do with cannibalism or, you know, gourmet-level “soylent green.”

The Searchlight pic will debut at the 2022 Toronto International Film Festival, and will open theatrically on 11.18.22.

“…but it’s not funny to me.” — Democratic gubernatorial candidate Beto O’Rourke to heckling Greg Abbott supporter in Mineral Wells, Texas, two or three hours ago.

Moments like these are magnetic bullets…bullets that are infinitely repeated on social media, and which everyone sees and responds to favorably or negatively. Methinks this is a huge boost for O’Rourke. He might win now.

Only Now Can It Be Told
Remember the bad old mask days? The mask nightmare lasted for two awful years -- March '20 to March/April '22. As recently as seven or eight months ago you could get into trouble for not observing mask protocols aboard commercial flights. It seems so long ago, but it wasn't. Mask mandates began to lift in February '22, but the emotional trauma will linger for years. Particularly the aggressive behavior of mask Nazis. Login with Patreon to view this post
August 11, 2022 9:40 amby Jeffrey Wells
90 Comments
For Many Years

Throughout most of the ’90s, when you thought of Brad Pitt you thought of two moments in David Fincher‘s Se7en — the head-in-a-box finale and the Yoda line. (Detective David Mills is as classic a character as Humphrey Bogart‘s Fred C. Dobbs.). And it stayed that way until Fincher’s Fight Club (’99), when Tyler Burden took over. The Durden thing reigned for eight years, and then came three landmark roles in relatively quick succession — Jesse James in The Assassination of Jesse James by the Coward Robert Ford (’07), the dumbshit workout-instructor role in Burn After Reading (’08), and Billy Beane in Moneyball (’11), which is still Pitt’s finest all-time performance. 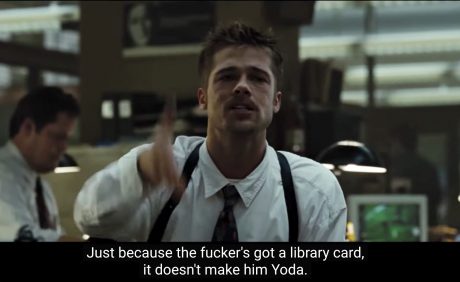 What 2022 male supporting performance is the most award-worthy right now? Easy answer: Colin Farrell‘s Oswald “Oz” Cobblepot (aka “Penguin”) in Matt Reeves‘ The Batman. Hands down, no question. And yet in Anne Thompson‘s IndieWire prediction piece about the hottest contenders in this category, she calls Farrell’s performance a “long shot.”

Thompson has posted a whole rundown. I don’t even want to weigh in except in the matter of Farrell.

“I think it makes a difference when a movie is physically bigger than you. I mean that. Your relationship to it changes.” — film critic Bilge Ebiri.

There’s no disputing that King Vidor‘s Duel in the Sun (’46), the derided David O. Selznick-produced western that became known as Lust in the Dust, is a groaner. Ditto The Fountainhead (’49), a boldly sexual adaption of Ayn Rand‘s novel with Gary Cooper and Patricia Neal. A pair of unsubtle big-studio movies about passion and fucking — overwrought and overplayed.

And yet I’ve never seen either in a theatre of any kind, and the Film Society of Lincoln Center is showing presumably handsome 35mm prints of both on Saturday as part of a Vidor retrospective. I’m tempted for obvious reasons. 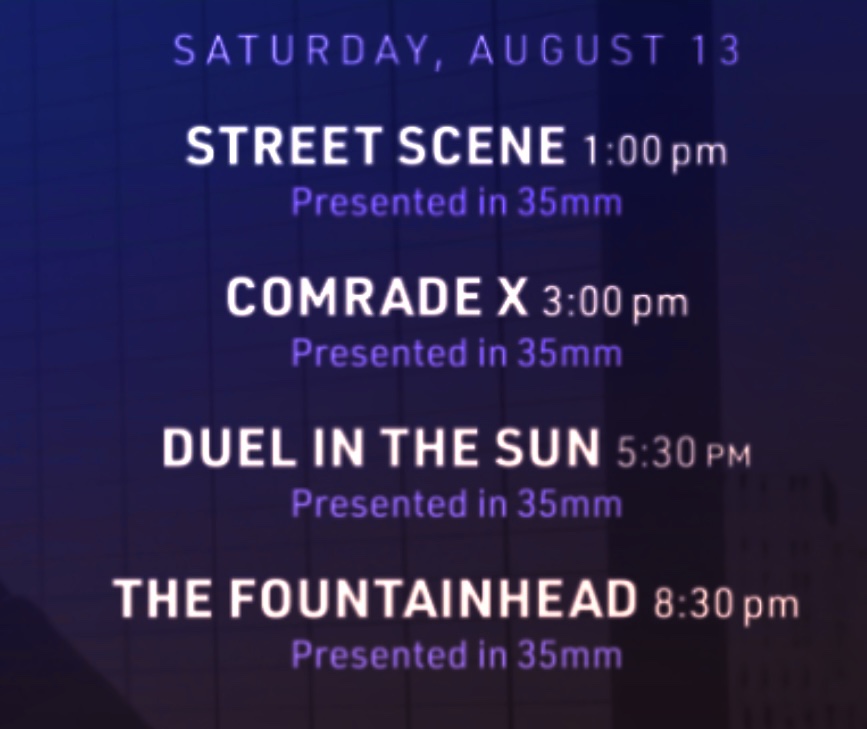 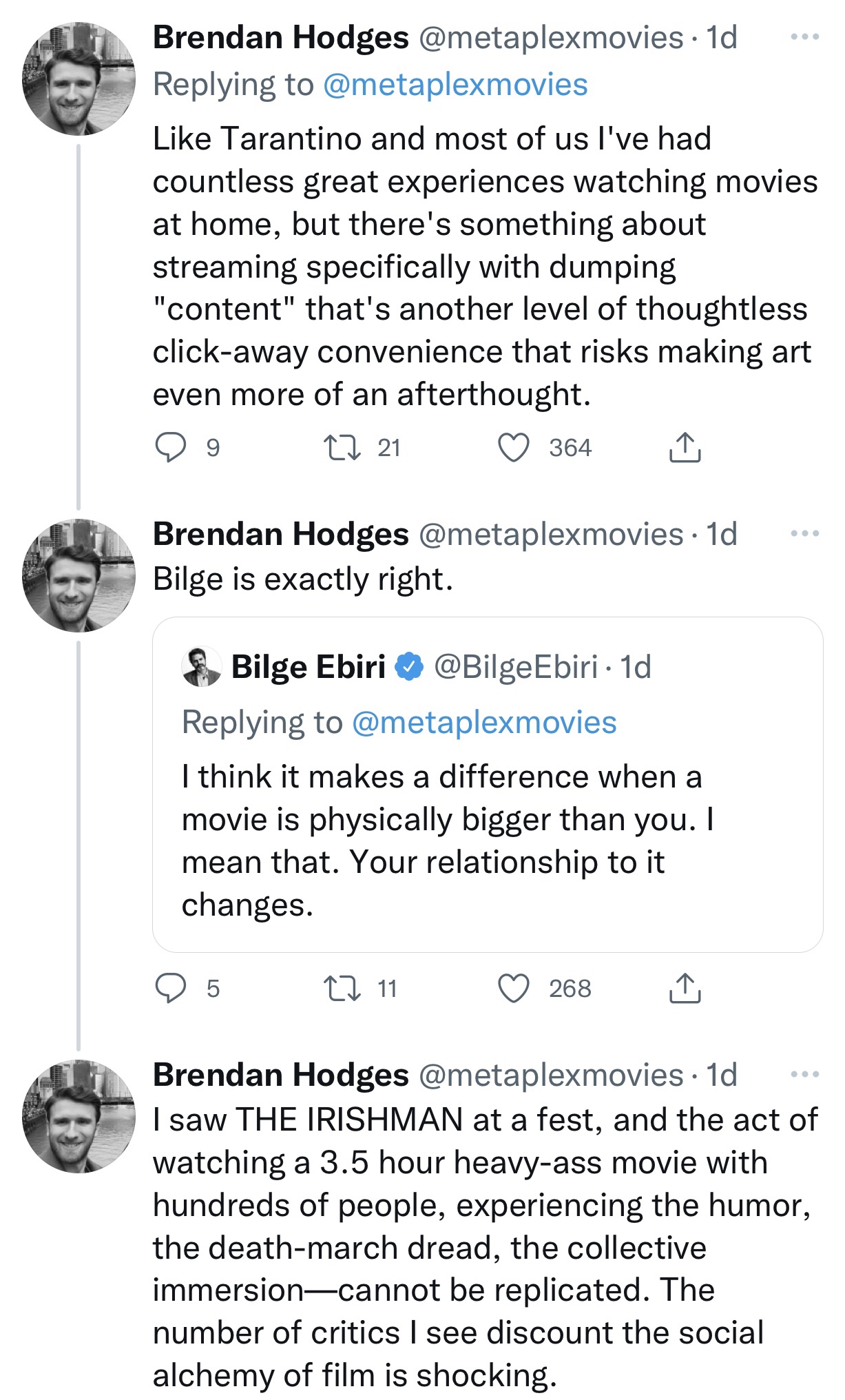 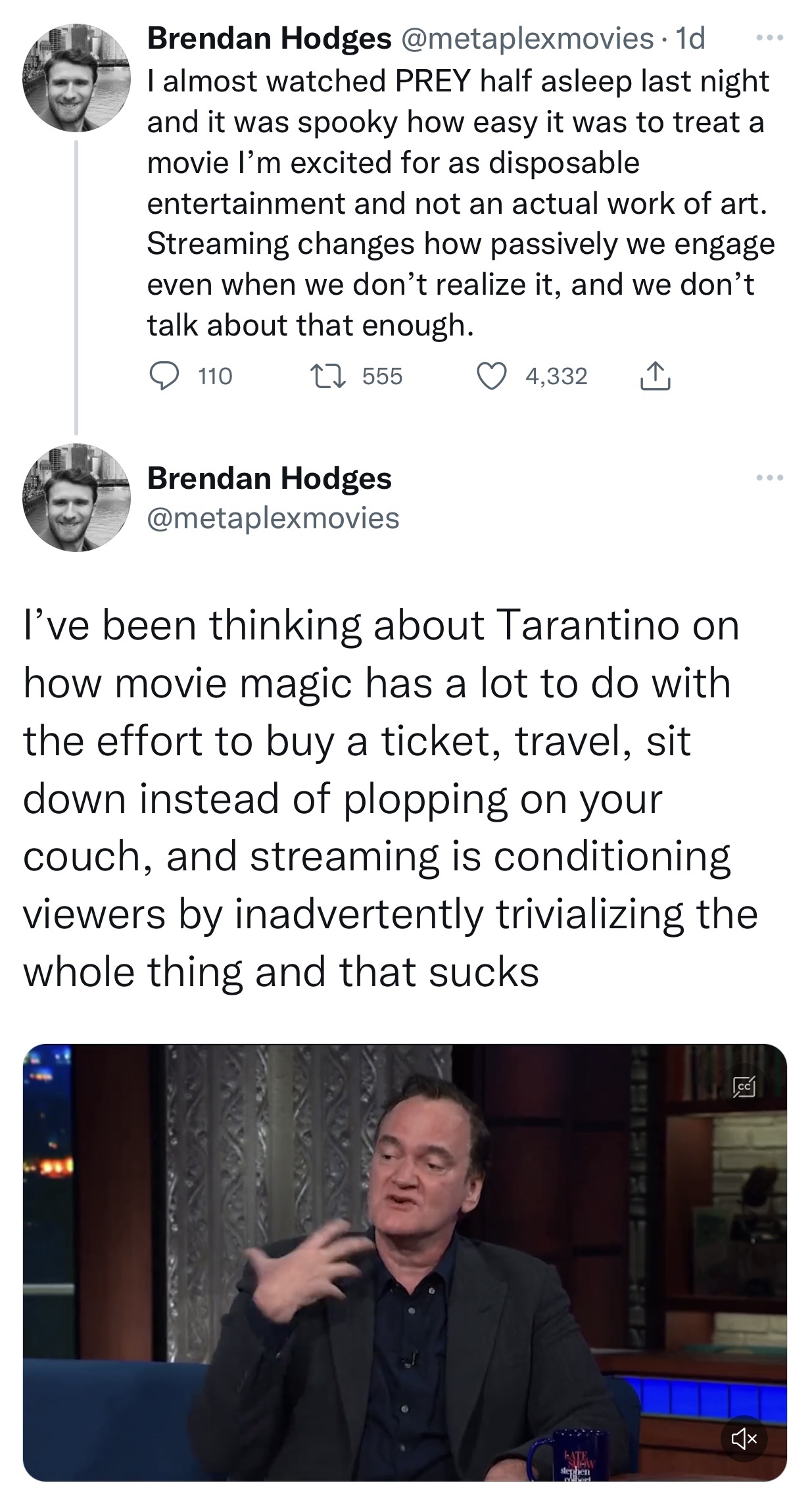 You’re a rooster trapped in a miserable cockfighting life. You’ve been brought up this way by cruel humans, and you have no choice but to fight other roosters to the death. An awful way to live. But when the ostensible good guys rushed in last weekend and shut down a large cockfighting operation, “they were forced to euthanize nearly 150 roosters found at a Southern California home.” I don’t know about you but if I was a fighting rooster, I would rather keep fighting and live my life, however miserable, rather than be killed by the authorities. The miserable gladiator is always in a better spot than a dead one.

Facts Are Facts
And no one's disputing evidence (including first-hand victim accounts) of Armie Hammer's disturbing sexual psychology and behavior. Then again bondage, discipline and dominance is a game...a weird game that has never seemed the least bit intriguing to most of us, but a game nonetheless. Yes, ignoring "safe words" is wrong and contemptible. Yes, Armie made his own bed -- no one to blame but himself. Yes, the history of the Hammer family is a perverse one. Login with Patreon to view this post
August 10, 2022 10:11 amby Jeffrey Wells

“I Respectfully Decline To Answer”
"...on the grounds that [answering] may tend to incriminate me." Login with Patreon to view this post
August 10, 2022 9:37 amby Jeffrey Wells
7 Comments
Home Is Where The Heart Is

I became a “bad kid” when I entered my early teens. Defying authority, shitty grades. I had all kinds of low-self-esteem issues, but that’s standard for any child of an alcoholic. I was certainly lippy and insolent with my dad, Jim Wells — a Mad Man exec who worked for J. Walter Thompson. I regarded him as a gruff, flinty, foul-tempered dick because — make no mistake — he was that.

One summer evening Jim and I came to blows, or rather he lost his temper and beat the shit out of me. I was 16. I suffered a head gash, bleeding all over my white shirt. I was seeing a therapist at the time, and as it happened I had a 7 pm appointment that evening. I told the therapist (who was also a serious dick) what had happened, and he took my dad’s side. He basically said, “Bruises and bloody shirt aside, kids like you are bad news and frankly you deserved it.”

In short, during a single summer evening I became 100% convinced that domestic parental violence was something to be avoided in the future, and that family therapists were not necessarily bringers of profound perception and wisdom.

Why hadn’t I grabbed a drinking glass and smashed it across my dad’s head during our kitchen fist fight? You know, like Joe Pesci does in that Copacabana fight in Raging Bull? I’ll tell you why. Because I was more of a lover (i.e., a movie lover) than a scrapper, plus I was basically too chicken to get seriously violent with my taller, heavier and stronger dad. When the kitchen fracas began I was mainly rope-a-doping — focused on protecting myself. But God, if I could relive that moment right now and if I had a hammer…

A year or two later I happened to watch Clarence Brown‘s Human Hearts, a family drama about a rebellious, independent-minded son (James Stewart) and his stern preacher father (Walter Huston). Huston has slapped Stewart around a few times, but prior to a fresh altercation Stewart tells him, “If you hit me, pop, I’m going to defend myself.” They tussle and Huston winds up giving Stewart another beating.

That was not the outcome I was hoping for.

Until last night I had somehow never read about James Garner‘s violent fight with his stepmother, Wilma. His alcoholic father married Wilma when the future movie star was five, in 1933. From the get-go Wilma was a “nasty bitch,” Garner recalled. His brother Jack later called her “a damn no-good woman.” Wilma would scold and beat Garner, and whenever he crossed the line Wilma would make him wear a dress and call him Louise. James finally had it out with Wilma in ’42, when he was 14. She came at him and he pushed back, finally “choking her to keep her from killing him in retaliation.”

Give her what for, Jimbo!

One way or another parents often manage to fuck their kids up. They brutalize and leave scars.

My son Dylan is currently back to regarding me as a dick in somewhat the same way that I regarded my dad long ago. (The difference is that I was 16 and Dylan is 32.) But in my late 20s as I sucked all that in and said “okay, that happened” and decided to cut my father a break, especially after he entered AA and apologized for his poor parenting skills and whatnot, explaining as honestly as he could that he just wasn’t cut out for being a good dad.

N.Y. Post article, posted today [8.10]: “Canadian rock guitarist Gord Lewis was found dead in his Hamilton, Ontario home on Sunday after he was allegedly murdered by his own son. Jonathan Lewis, 41, was arrested and charged with second-degree murder as the Hamilton Police Department continues to investigate the case, according to local reports.”

I would love to see a short film about Garner and Wilma’s relationship, ending with the strangle slapdown.

Telluride Slate Feels Thin
I'm feeling blue about Jordan Ruimy's firm declaration that White Noise, The Son, The Fabelmans, Blonde, The Whale, Master Gardener, She Said, Till, The Eternal Daughter and The Banshees of Inisherin are not going to Telluride. Login with Patreon to view this post
August 9, 2022 2:57 pmby Jeffrey Wells