“Why don’t you and others who cover NY theatre just spit it out about Beanie Feldstein bailing out of Funny Girl eight weeks before the scheduled end of the run?

“Why the kid gloves? She wasn’t Streisandy enough, right? Which basically means she wasn’t quite knockout enough (a pretty but thin voice, couldn’t belt the songs like Streisand), which means that the producers made a mistake in hiring her. 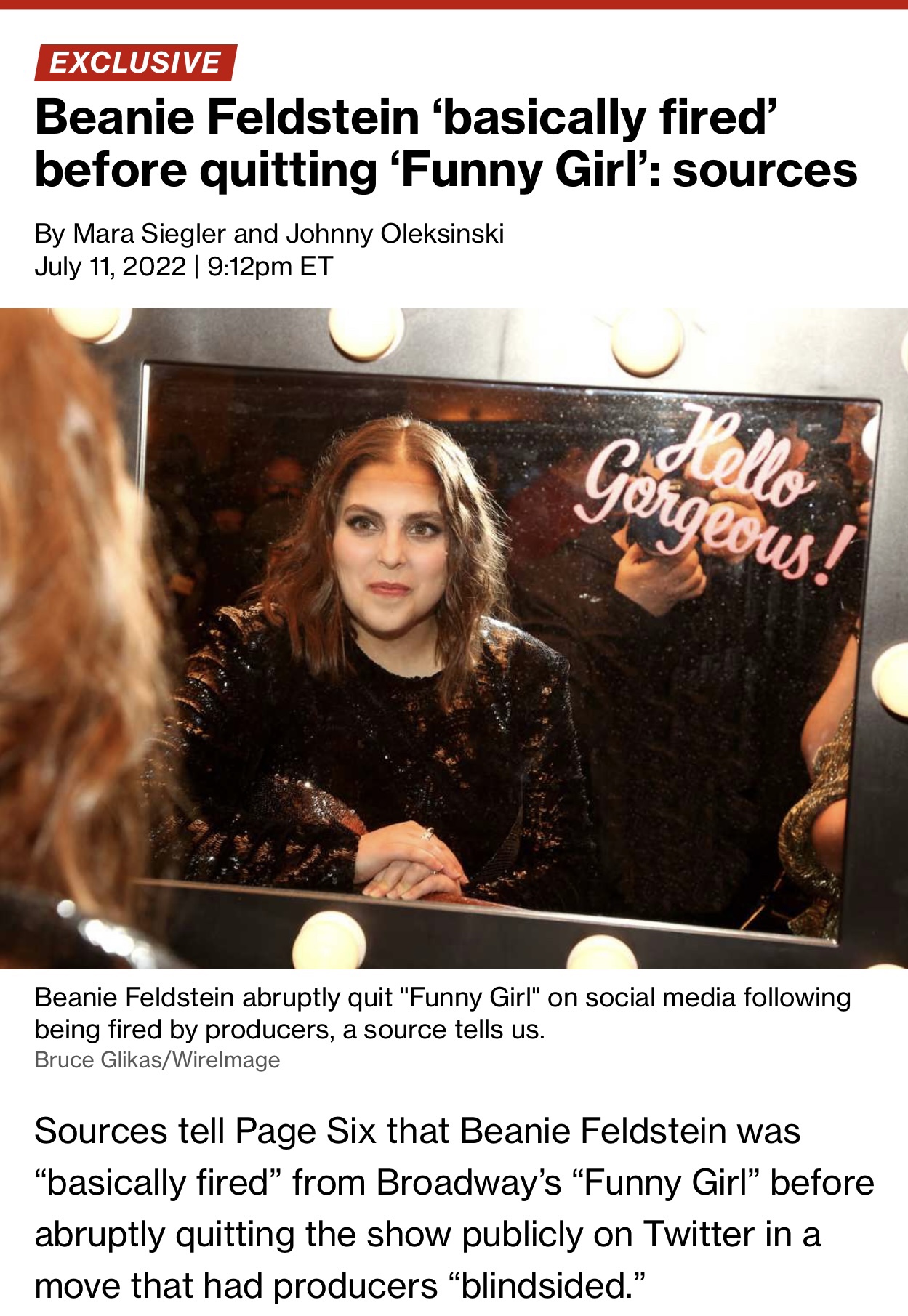 “Plus she didn’t feel good about the reactions (no Tony nom) plus she kept missing shows, which indicates she wasn’t feeling a great deal of confidence, and so she either quit or was nudged aside. I’m presuming that nudged is closer to the truth.

“What’s this weird omerta I’m sensing from everyone? You all seem to be saying ‘we need to handle this story with kid gloves in order to let Beanie down easy.’ New York theatre is a tough realm, and sometimes shows and performances don’t work out.”

Unfair Dismissal
On 7.3.22 I stated that before he became the energizer bunny in a series of action franchise films, Tom Cruise was a real actor who delivered like a pro in several top-grade dramas. Mickey Rourke's criticism of Cruise is valid if you're focusing entirely on the franchise stuff, but he was excellent in the following 15 substantial films (in this order and excluding all of his high-powered, robo-bunny formula action franchise films): Jerry Maguire, Collateral, Risky Business, The Firm, Born on the Fourth of July, Rain Man, Jack Reacher, American Made, The Color of Money, Tropic Thunder, A Few Good Men, Edge of Tomorrow, Losin' It, Interview with the Vampire, Magnolia. Login with Patreon to view this post
July 11, 2022 3:14 pmby Jeffrey Wells
2 Comments

Deep Freeze
It was reported yesterday that a 64-year-old Florida woman has been charged with failing to report her mother’s death. Login with Patreon to view this post
July 11, 2022 2:56 pmby Jeffrey Wells

No Comments
Nobody Has A Perfect Marriage

After debuting at SXSW last March, Ethan Hawke‘s The Last Movie Stars, a six-part doc about the lives and careers of Paul Newman and Joanne Woodward, will begin streaming on HBO Max on 7.21.

I watched the first episode last March, and it’s clear that the focus is on what a wonderful, cooler-than-cool, super-glorious relationship Paul and Joanne had. They first met in ’53 or thereabouts, got married in 1958 and stayed together for 50 years. Paul died on 9.26.08. 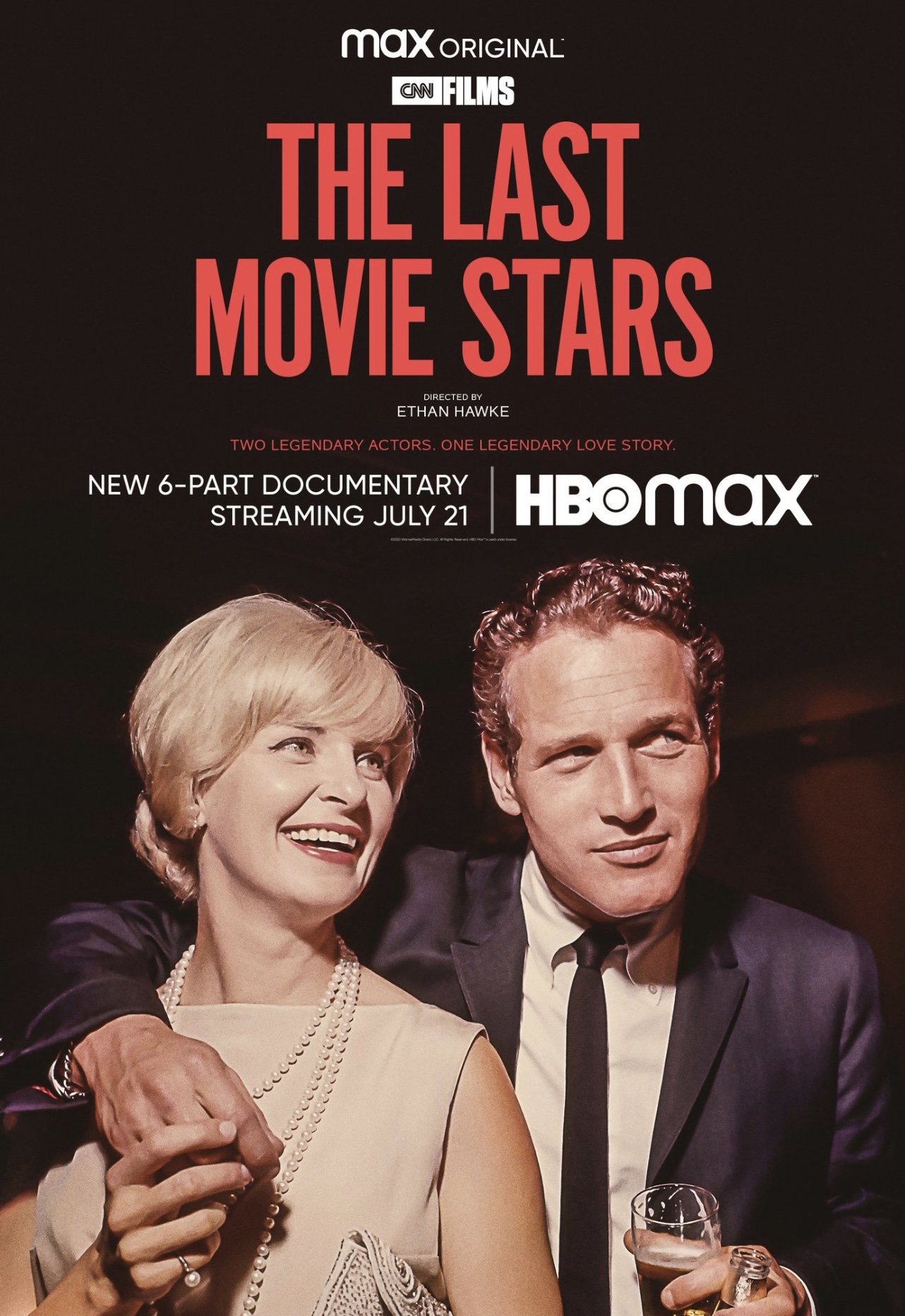 To me the relentlessly celebrated mythology of Paul and Joanne’s marriage has always felt a tiny bit bothersome. As in less than trustworthy.

No marriage is easy or perfect or without issues. A workable, tolerable marriage is almost always the result of very hard work — all kinds of soul-barings, renegotiations and reappraisals at the kitchen table. Which is why portrayals of the Newman-Woodward marriage never seemed quite real to me.

Did they in fact have a strong and healthy marriage? All the accounts say yes, but to me the only thing that makes their history recognizably human (which is to say flawed) is the affair that Paul had with journalist Nancy Bacon in ’68 and ’69. An account of the affair was included in Shawn Levy‘s “Paul Newman: A Life” (2009).

If Ethan’s miniseries goes there, fine. But if he avoids it, he’s a sidestepper.

Friendo who knows the Newman-Woodward story and has dealt with the Newman family: “I haven’t watched the doc, but I’m sure it’s authorized, and as the surviving Newmans don’t care for anything remotely negative being said about their patriarch, I’m confident that it will avoid all unpleasant or even circumspect episodes/behaviors.

“[That said], I do believe that it was a truly golden relationship, built on mutual respect, amusement, tolerance, even passion. So, yeah, too good to be true, but also — for the most part — true.”

And you know what? For the sin of mentioning the 18-month Bacon episode I’m going to be attacked. Because people want to believe what they want to believe.

How SCOTUS Could Help Trump Steal ’24 Election
"It’s Hard to Overstate the Danger of the Voting Case the Supreme Court Just Agreed to Hear," posted on 6.30.22 by Slate's Richard Hasen: "The Supreme Court has agreed to hear Moore v. Harper, an independent state legislature (ISL) theory case from North Carolina. This case has the potential to fundamentally rework the relationship between state legislatures and state courts in protecting voting rights in federal elections. It also could provide the path for election subversion in congressional and presidential elections." Login with Patreon to view this post
July 11, 2022 12:00 pmby Jeffrey Wells
11 Comments
Disbelief Isn’t Entertaining

Tom Cruise‘s right-hand grip glove stopped working after 90 seconds of use, he fell 15 or 20 feet but stopped the fall with one grip-glove (the left one), used a firehouse to run down the outside of the bulding and then, toward the end, rappelled along the outside of the building and then leapt toward the open, glass-free window panel. Bullshit. I was so overwhelmed by skepticism that I couldn’t enjoy it.

But Matt Damon’s telling of the “safety guy” story to Conan O’Brien, which I only just listened to this morning…this is entertaining. Why? Because it reveals a certain kind of character trait — hardcore and perfectionist and focused only on the prize — in a funny way.

I love it when sea lions show trashy, texting humans who’s boss and make them run for cover. This La Jolla territorial rampage was probably about protecting pups. “Danyourd” tweeted yesterday that the small cove in question is “was built as a safe area for kids to swim. Seals showed up in the 1980s and have overrun and polluted it.”

A group of people were chased by two Sea Lions at a beach in the La Jolla area of San Diego. Lifeguards were on standby in the water ensuring no one was hurt and the sea lions could easily make their way. It's recommended people stay at least 50 ft away from sea lions. 📹: Charli pic.twitter.com/KUhLVns8H7

In his Variety review of Alex Holder’s allegedly underwhelming Unprecedented, Owen Gleiberman puts on his political hat and issues a warning: 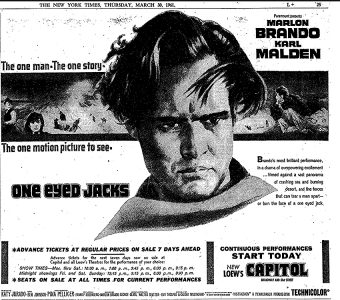 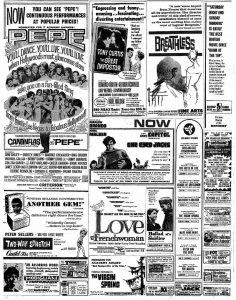 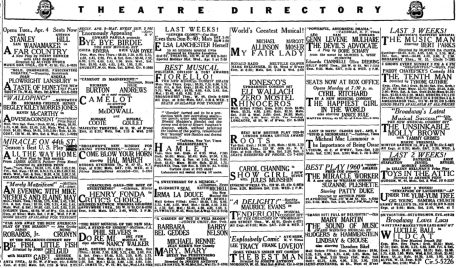 I’m halfway through Tomasz Winski‘s Borders of Love, which recently debuted at the Karlovy Vary Film Festival. We all understand how things eventually go when a couple tries an open relationship. Somebody abuses the rules in some way, shape or form and trust goes out the window. I’ve seen Ingmar Bergman‘s Scenes From A Marriage (’73), of course — similar territory. At the very least the newbie is moderately interesting.

If They Don’t Like It, Tough
Eff the hinterlanders who may not be able to deal with a felonious and traitorous ex-President being charged with serious crimes. If they respond to his arrest and indictment with violence and weapons and whatnot, good -- round 'em up, cuff 'em and put 'em in jail. We live in a Democracy built upon laws and legislation, and no one is above it. Trump is a sociopath who fully deserves whatever punishment may be coming his way.