Pushed Around By Florida Project

I didn’t have a great longing to see Sean Baker‘s The Florida Project (A24, 10.16), a lower-depths mother-daughter saga set in low-rent Orlando, when it played in Cannes. Yes, I wanted to see the follow-up by the guy who made Tangerine, for sure, but the hard truth is that I didn’t want to see it enough to push aside other stuff I wanted to get to. The Florida Project was always in third or fourth place on the list. 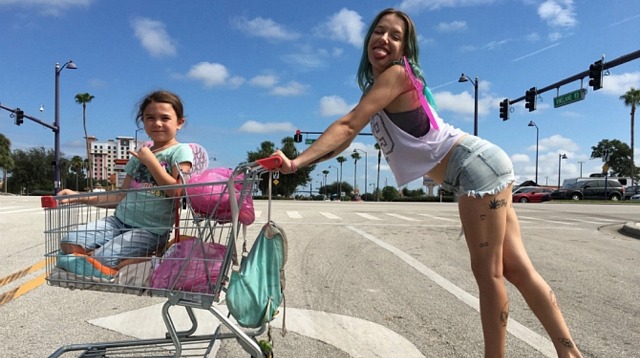 If you read any smart comprehensive review of the film (Owen Gleiberman’s, for example) and the story it tells, there’s no way The Florida Project alludes to any part of it. If Baker was shooting in Orlando and hadn’t yet figured out a title, calling it The Florida Project would have been cool. But releasing it months later with that title is just smug bullshit on his part. It’s a lazy-ass moniker that Baker chose because nobody told him he couldn’t. And now we’re stuck with it.

Update: “The Florida Project” was the working title for Disney World when it was under construction, and the motel where most of the action takes place is a borderline housing project. Make of that what you will.

Imagine if George Lucas had been stuck for a title when he was shooting principal photography on Star Wars, and so he called it Big Wookie and then, out of boredom, Overcooked Pasta. Then he gradually fell for the former, in part because execs at 20th Century Fox (including Alan Ladd, Jr.) never argued for a more commercial title. Big Wookie opened on 5.25.77, never quite reaching blockbuster status but becoming a mid-sized cult hit.

This is what The Florida Project is — Sean Baker’s Big Wookie.

It’s not like I didn’t try to see The Florida Project once the word got around. I tried to attend a late-night market screening but the line was too long.

The only thing I don’t like about The Florida Project is that super-cool, pre-approved, don’t-you-dare-say-anything-negative status, which translates into a kind of cultural oppression or intimidation for second-wavers like myself.

From my “Completely Honest Tangerine Review,” dated 7.10.15: “The only thing I don’t like about Tangerine is having to like it because the thought of saying you don’t like it is too terrible to contemplate. Nobody wants to be on the outs with the cool kidz, nobody wants to fall under suspicion, and nobody would dare look askance at a film that was shot for dimes and quarters on an iPhone…are you kidding me?”

Right now my basic attitude about The Florida Project is “show me.”

June 13, 2017by Jeffrey Wells10 Comments
« Previous post
When Nichols Downshifted Out Of Despair
Next post »
Blink of an Eye