Initial reaction #1: World-class actresses have always had a certain X-factor quality, an unmistakable spark of passion or depth of feeling when the camera gazed upon them. They didn’t have to be classically beautiful (i.e., Bette Davis) or boudoir sexy, but they had to have that combustible quality. I realize that all cultures are constantly evolving and that aesthetic standards change with them, but Vicky Krieps, no offense, doesn’t have that “it” quality. She just doesn’t.

Krieps strikes me as an arresting actress as far as the task of conveying complex emotions is concerned, but she clearly lacks magnetism. She reminds me in some ways of Brief Encounter‘s Celia Johnson — an emotionally relatable but spark-free actress with plain, unremarkable features. In the ’50s, or the period in which Phantom Thread occurs, Krieps might have had trouble being cast as a housemaid or shopkeeper or a barely-noticed office clerk, much less as the costar of a film about an intense, highly-charged relationship.

Key trailer quotes: “When I was a boy I would hide things in the liners of garments…things that only I knew were there….secrets.” “So why are you not married?” “May I warn you of something?” “Perhaps I’m looking for trouble.” “Stop!” “There’s an air of quiet death in this house.” “You’re not cursed, you’re loved.” “What game? What precisely is the nature of my game?” “Are you thinking of ruining my evening? And possibly my entire life?” “Stop it!” “Whatever you do, think carefully.”

Initial reaction #2: I’m not feeling the crazy in this trailer. The theme seems to be “leave this artist alone to create what he needs to create…if you fuck with his system or his behavior or obsessive work patterns, you will bring on nothing but trouble.” It seems to basically boil down to Rex Harrison‘s song of complaint and lament in My Fair Lady, “An Ordinary Man.” Key Lyric: “Let a woman in your life, and your serenity is through.”

An older, graying, work-obsessed couturier named Reynolds Woodcock (Daniel Day Lewis) falls for a significantly younger but plain-featured woman named Alma (Vicky Krieps), and at first everything is delightful. But as the initial passion begins to recede it becomes clear that Alma has certain feelings and convictions that clash with Reynolds’ realm. Reynolds’ sister Cyril (Lesley Manville) quietly warns Alma not to interfere with his creative process as Alma begins to reveal a dark, possibly even perverse side to her nature. What began as a love affair begins to transform into a battle of wills and passions.

Initial reaction #3: Where are the hints of Phantom Thread being a classy, upmarket Fifty Shades of Grey, as rumors have had it?

Initial reaction #4: Perhaps Paul Thomas Anderson‘s point in casting the unremarkable looking Krieps was to convey something about the sometimes curious nature of love and passion. You may not see or sense the thing that lights Reynolds Woodcock’s fire, but R.W. certainly does, and that’s all that matters as far as the watching of this film is concerned. 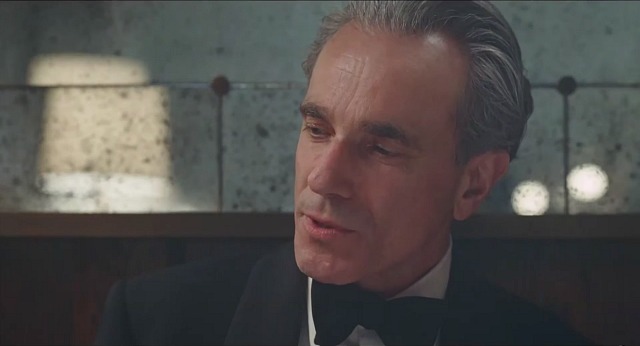