Patrick Goldstein‘s 4.15 “Big Picture” column is about The Soloist, a kind of uplift drama about the relationship between real-life L.A. Times journalist Steve Lopez (Robert Downey, Jr.) and a schizophrenic musician named Nathaniel Ayers (Jamie Foxx). I don’t know what it is, but it sounds like a blend of Awakenings, The Fisher King and The Killing Fields with mental illness taking the place of the Khmer Rouge. 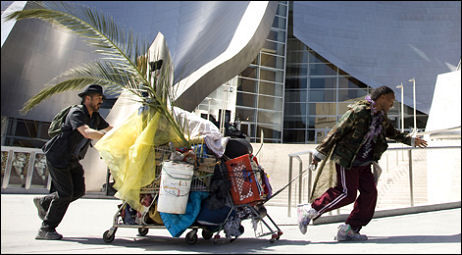 One noteworthy thing about Goldstein’s piece is that the release date is revealed to be 11.21.08. This means, obviously, that DreamWorks, the distributor, believes it may turn out well enough to at least compete as an Oscar hopeful.
Based on a series of columns that ran in the L.A. Times in 2005, The Soloist has been written by Susannah Grant (Erin Brockovich) and is being directed by Joe Wright (Atonement). It’s about friendship and healing, but I’m worried by any drama about a colorfully crazy guy whose life is gradually saved by a guy who is healthier and more grounded but (I’m guessing but I’ll bet $100 that I’m right) is a bit eccentric himself and who is sorta kinda restored also by the act of helping the homeless guy.
I’m sorry, but on a certain level movies like this scare the living shit out of me. Guys who push their crap around in a shopping cart get on my nerves almost instantly. I don’t like movies about healing unless they’re absolutely genuine. If there’s even the slightest hint of Hollywood confection….brrnnnggg!
Quick — name another film that’s (a) partly set in downtown L.A., (b) costars Foxx as a delusional guy whose life is not working out but (c) is saved at the end by an eccentric benefactor.