No two ways about it — Martin Scorsese‘s Shine a Light needs to be seen in the IMAX format. It’ll be agreeable in regular 35mm — fun, engaging — but the wow factor will be missing. The Rolling Stones concert film was shot in a semi-intimate setting — Manhattan’s Beacon Theatre — and the intense close-ups and gigantic size of the bodies and faces of Mick Jagger, Keith Richard, Ron Wood and Charlie Watts make it seem even more so. This movie is all over you. 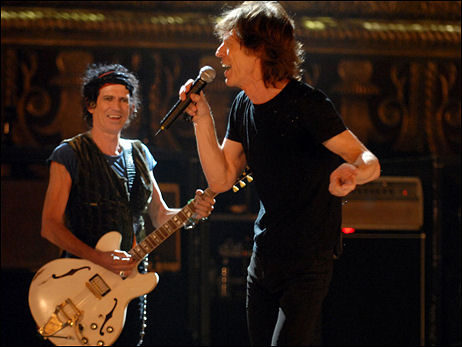 An approximation of the IMAX aspect ratio (1.43 to 1) of Shine a Light

Robert Richardson‘s camerawork (with celebrated dps like John Toll and Emmanuel “Chivo” Lubezki working as camera operators) swings, soars and glides with pulsing rhythm. At times the camera dives and swoops like a hawk. At times it makes you feel as if you’re literally dancing alongside Jagger, but with the kind of exacting discipline that Gene Kelly brought to his big dance numbers in those ’50s MGM musicals. (With maybe a little Twyla Tharp thrown in.) The cutting is clean and smooth and exhilarating at times. The film has a phenomenal visual energy.
Scorsese starts things off with a 10- or 12-minute short in a relatively small and boxy (1.33 to 1) black-and-white format. Scorsese is the lead character at this point — the director asking questions, sorting things through, being told he can’t do this or that, etc. This is the footage of the show’s planning, preparation, logistics. And it’s very engaging. But the split-second that the show begins….wham! We’re IMAX-ed up — in color with the images suddenly twice as tall and four or five times louder, and we’re off to the races.
It’s thrilling in nearly the exact same way that audiences were wowed when This is Cinerama! (’53) went from boxy black-and-white newsreel footage of Lowell Thomas to a sudden cut to the full-color, three-camera Cinerama shot of a mountain range as the music soared and the curtains parted to make room for a much taller, super-wide image. 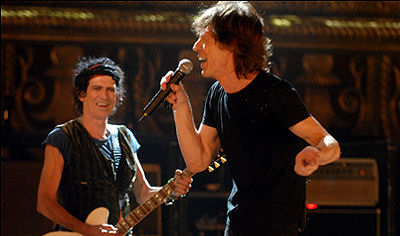 I can’t imagine how this effect can be delivered on a conventional 35mm screen, and I’m not precisely sure how the IMAX image I saw last night at L.A.’s Bridge Cinema will be presented in a “flat” format. The IMAX aspect ratio is on the boxy side with an aspect ratio of 1.43 to 1. Movies in regular theatres are projected at 1.85 to 1 or, if filmed and projected in Scope, 2.39 to 1. The Shine a Light bottom line is that either (a) the 35mm non-IMAX version will present more visual information on the sides in order to fill out a wider 1.85 to 1 image, or (b) the IMAX will be cropped to create a 1.85 to 1 aspect ratio on 35 mm. Am I being confusing?
I’ll try to figure this out tomorrow morning. I tried to get a clear understanding of whether the 35mm image will be wider than the IMAX image but smaller in scale, or whether it will be a less tall version of the IMAX image. I asked and asked and asked, and nobody really knew.
The power of those IMAX speakers…my God! And the re-animated groove that the Stones get into with 80% of the songs is sublime. Before last night I thought I’d heard “Tumblin’ Dice” once too often, but the version in the film is so hypnotically cool and soul-freeing that I’d now like to find a soundtrack recording, or at least an iTunes track of this particular rendition. The only rote performances are of the big headline songs (“Start Me Up,” “Brown Sugar,” etc.) The less well-known ones are mostly transcendent. The relatively quiet and contained performance of “As Tears Go By” is a classic.
The IMAX closeups of all those jowls, turkey necks and crows feet on the Stones’ faces are something really new and different in the annals of rock-concert films. This sounds like I’m being a smart-ass, but I found them genuinely cool and fascinating. Keith looks like a Peter Jackson CG creation, a Lord of the Rings troll.
Did director Gore Verbinski put make-up on Richards for his Pirates of the Caribbean cameo? I walked out before Richards’ scene (the film was despicable), but I saw an online photo of Richards and Johnny Depp and it looked to me like Keith’s face was all gunked up. If he looked this way in the film Verbinksi needlessly embroidered one of the world’s great natural weirdnesses.
Shine a Light ends with a knockout Scorsese tracking shot — a half-real, half digital thing in which a single hand-held camera seems to follow Jagger and the others as they make their way through the backstage throng and out the stage door. Scorsese himself, absent since the early black-and-white footage, makes two appearances in this sequence. And then the camera alights and soars over Manhattan and…I don’t want to over-describe, but it’s beautiful.