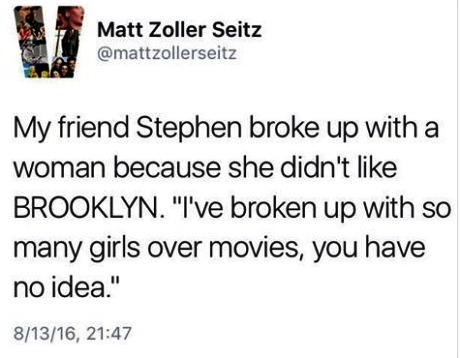 My response: You can reject Brooklyn, if you so choose, for the following three reasons: (a) Saoirse Ronan‘s faithlessness when, having quietly married Emory Cohen, she returns to Ireland and starts to swoon about staying there with Domnhall Gleeson, (b) the sense that the entire Irish populace has resolved to do everything in its power to persuade Saoirse to stay, and (c) the fact that Emory is too short for her — she clearly has him by at least an inch and perhaps five or ten pounds.  This could have easily been fixed if he’d simply worn lifts, but director John Crowley didn’t feel it was important, which is bullshit and doubly so by early 1950s standards.

Short-tall differences have always been a very significant factor among 90% or 95% of women since the beginning of time. They all prefer guys who are at least their height if not a bit taller, and in the straightlaced early ’50s this was even more of a mantra, a requirement or an expectation. So it’s just not real-world in Brooklyn to have a jockey-sized boyfriend with a girlfriend who could take him in a wrestling match. What happened, I suspect, is that Crowley wanted to demonstrate to the film industry how unjudgmental he is (no size-ism or height-ism!). The problem could have easily been remedied with lifts. Crowley knew it was a problem, and he chose to ignore it.

Almost everyone has experienced at least one movie breakup moment. Even if the decider didn’t act on it right away. You know what I’m talking about. Any time you fall for a film you always want to see it two or three times, at least, and so you take the hot lady of the moment to see it and she doesn’t get it — she’s either mezzo-mezzo or distracted and hates it or whatever. And right away you know.

You might continue to see each other and have some really good times, but that sinking feeling tells you it’s never going to pan out, not really, because she wasn’t wise or seasoned or deep enough to get that film. Because rejecting exquisite films is a blade of grass that tells you a lot about the universe of that person.

I also once decided not to go on any further dates with an otherwise attractive lady after she said she really liked the wrong Reese Witherspoon movies — Legally Blonde, Sweet Home Alabama, This Means War, Like Water For Elephants. It would’ve been a horse of a different color if she’d said she loved Witherspoon in Election, but she hadn’t even seen it. Case closed.

Then again I might fall harder for someone if they said they don’t like Django Unchained or Inglorious Basterds.

Another form of vague movie anguish is when a woman you really like in a strictly-friends sort of way falls head over heels for The Social Network, and you’re thinking to yourself, “Why is life so unfair at times? Why can’t the girl I find immensely attractive and whose naked bod is one of God’s greatest glories…why can’t she get The Social Network the way my platonic friend does?”

August 14, 2016by Jeffrey Wells41 Comments
« Previous post
And Howard’s Beatles Doc Will Be Screened…?
Next post »
If I Had A Gun…