Too Close To Home?

In case you haven’t figured it out, a big reason why a bit more than half of the film critics have gone thumbs-down on Roger Michell‘s Morning Glory is because they see this above-average comedy as an endorsement of the dumb-down currents in the media and the culture that are making their jobs more and more unstable. Seriously — re-read some of the pans with this idea in mind and you’ll see what I mean. 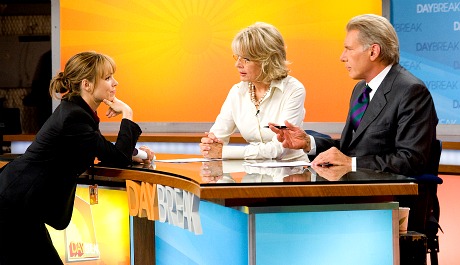 Critics have obviously been jettisoned from newspapers over the last few years in much the same way that crusty older news guys like Harrison Ford‘s Mike Pomery, an old-school Dan Rather type, have been put out to pasture by TV networks. And so they’re hardly snickering at Pomery’s predicament. They’re saying, “Hey, that’s us!” They resent that Morning Glory presents Ford mainly as a grumpy, semi-alcoholic bear who doesn’t get it, and not as a semi-good guy who represents an in-depth news tradition that’s being slowly weakened or diminished.

And so they don’t see Roger Michell‘s film as a story about a plucky young TV morning-show producer, Rachel McAdam‘s Becky Fuller, trying to survive in a tough racket by pizazzing up a show called Daybreak with any stunt she can think of. They see a film that regards Becky as fairly cute and cool and they’re saying, “Wait…what?”

They feel that Morning Glory ought to condemn or at least frown upon Becky, as Broadcast News clearly condemned and frowned upon William Hurt‘s shallow news anchor Tom Grunick. And they feel that Morning Glory is basically embracing the modern media’s general tendency to embrace fluff over substance, tweets over news articles and Ben Lyons-type movie enthusiasts over critics with experience and taste with a background of serious study and decades of film-watching.

A review by the Christian Science Monitor‘s Peter Rainier spells out this attitude fairly clearly.

“Morning Glory is about how Rachel pulls Daybreak out of the basement by, you guessed it, dumbing it down ever further into imbecility,” he writes. “This might be an acceptable premise for a comedy except for one thing: The filmmakers endorse the imbecility. Morning Glory is a tribute to low standards and high ratings – just the sort of thing Hollywood can get firmly behind.

“I realize this movie is, essentially, cotton candy, but it has an acrid aftertaste. Becky, a human whirligig epoxied to her BlackBerry, is portrayed as a vivacious sprite. Her anything-for-ratings ambition is supposed to be, well, cute.

“Her big move comes when she pairs the morning show’s longtime, long-suffering host Colleen Peck (Diane Keaton) with curmudgeonly blowhard Mike Pomeroy (Ford), the network’s resident hard-news legend who has been sitting out his contract after being shifted out of his evening anchor spot. These cohosts despise each other. While Colleen is willing to don a fat suit and tussle on air with a sumo wrestler, the grave-faced Mike, who has won every journalism award known to man, won’t even do one of those obligatory cooking-class segments. (He won’t even utter the word ‘fluffy.’)

“Instead of standing up for the type of journalism that Mike represents, director Roger Michell and screenwriter Aline Brosh McKenna (The Devil Wears Prada) denigrate him as a scowly relic from a distant era. The film’s payoff arrives on cue when, grudgingly, inevitably, he comes around.

“Keaton at least looks as if she’s having fun as the alternately daffy and hard-edged former Miss Arizona who’s seen it all. Ford, however, keeps himself in a constant state of humorless high dudgeon, and his Scrooge routine gets very old very fast. He acts like someone who never told a joke – or heard one.

“Broadcast News, of course, is the template for this movie, but a bit of “Network” might have been welcome, too. The dismal dumbing-down that Paddy Chayefsky’s Network predicted for the future of TV has been more than fulfilled, but, whereas Chayefsky was mad as hell about it, the folks behind Morning Glory are just fine with it.

“Is it fair to judge a dippy romantic comedy by its ideas – or lack of them? I think it is, if, as is the case here, the ideas, such as they are, are central to the comedy. Morning Glory isn’t targeting the dumbing down of TV news. It’s pandering to the audience that craves the dumbness.”