Since In Contention‘s Kris Tapley has broken the news that Rod Lurie‘s Nothing But The Truth is going to the Toronto Film Festival, and since he’s offered some favorable impressions of the lead performances (having seen a version a while back), I may as well admit I’ve also seen a not-quite-finished cut and that I feel it’s Lurie’s best, hands down. 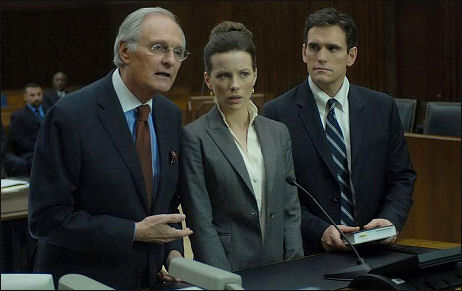 “Best” because it’s feels smoother and crisper and more confidently dug into the soil than The Contender or Resurrecting The Champ or The Last Castle. It’s a growth-spurt thing, a movie that says, almost with a kind of shrug, “Okay, now I really know what I’m doing.” And because each and every actor nails what they’ve been hired to do like the pros they are, and I don’t just mean the leads — Kate Beckinsale, Vera Farmiga, Alan Alda and Matt Dillon, all of whom hit triples and homers.
I also mean costars Noah Wyle and David Schwimmer and even the homie-girl actresses who play Beckinsale’s cellmates when she goes to the pound for refusing to give up a source. I mean everyone up and down. Everybody delivers, nobody “acts.”
The story and theme of NBTT won’t cause the tectonic plates to shift under your feet, but it’s not coming from that kind of place. It’s simply an efficient political drama — no small feat! — that reshuffles the cards provided by the Valerie Plame-Joseph Wilson episode. Beckinsale isn’t Judith Miller, thank God, but a hungry journalist for a major Washington Post -like daily who learns the identity of a CIA agent (Farmiga) from an unlikely source and, for reasons too complex to get into, reveals this in a front-page story.
And is soon being pressured by a tough special prosecutor (Dillon) to give up her source. And who’s counselled by a smoothie defense attorney (Alda). And who isn’t supported enough by her husband (Schwimmer). And who misses her kid(s) and is eventually carrying the cross — incarcerated, traumatized, no makeup, blue. 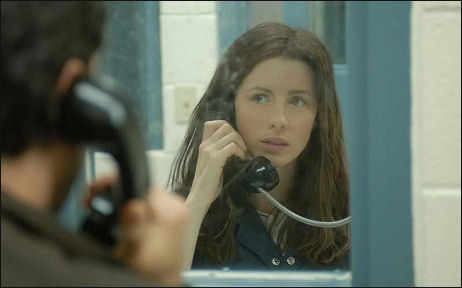 The film has a little bit of that Alan Pakula ’70s paranoia going on. Everyone is fairly above-board as to their actions and motives, yes, but the world of Nothing But The Truth is faintly unnerving in that one always senses what may be waiting around the corner, patiently and with a court order.
One could call NBTT a prime example of the kind of smart, middle-budget movie that producers and studio guys are making fewer and fewer of these days. I for one worship the ground films like this walk on. Lurie’s film is as good as the highly satisfying Recount, the HBO political drama with Kevin Spacey, and that’s a serious compliment. I know the marketing people always go “eeeek!” when they hear someone say this, but it’s a badge of pride and distinction.
NBTT has been well shot by Alik Sakharov — unpretentious, nicely shaded. The political tension is leavened by occasional servings of wit, humor, attitude. It feels believable in terms of milieu and even the small performances (even Lurie is good in a brief cameo), and basically has every key aspect nailed down and humming and completing the whole.
Each and every performance works, but the best, for me, is Alda’s clothes-horse attorney. (I particularly loved his work in a delicious restaurant scene with Schwimmer, which I can’t explain without spoiling.) Beckinsale’s work is absolutely her finest ever, such that I’m almost persuaded to forgive her for Pearl Harbor and those two awful vampire films. Farmiga’s anger moments are grounded and pan-fried, and I felt completely accepting of (and half-enjoying, in a perverse way) Dillon’s right-wing prosecutorial hard-ass. 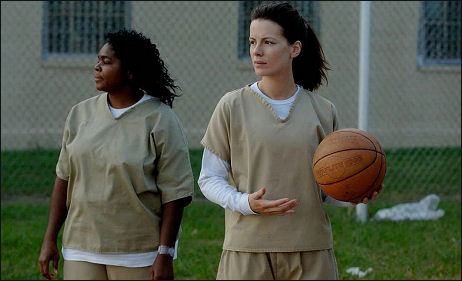 And I was very impressed with a conjugal prison scene between Beckinsale and Schwimmer, whom I don’t want to overlook — he’s solid and true in every at-bat.
I came away from this film satisfied and sated (except for a slight reservation about the ending). I had read the script several months ago and yet the film played better than what I expected. That happens every so often, and sometimes the film isn’t as good as the script. All I know is that about 10 or 15 minutes in, I was saying to myself, “Okay, this is entertaining, this is very good, I’m liking each and every scene, there’s no fat, the actors are at the top of their game,” etc.
Yes, I know and am friendly with Lurie, but I know good craft and good material when I see it, and I’m sure as hell not going to sit on what I know and feel because of a reverse-blowjob concern.