If the Best Actress Oscar race was more of a free-for-all (i.e., if it wasn’t a Meryl Streep vs. Viola Davis eyeball-to-eyeball), Michelle Williams would be surging right now in the minds of those Academy geezers that Gold Derby‘s Tom O’Neil is always talking about. O’Neil has posted stats indicating that younger, hotter actresses tend to win Oscars more than older actresses (unless we’re talking about exceptions-to-the-rule like Helen Mirren). 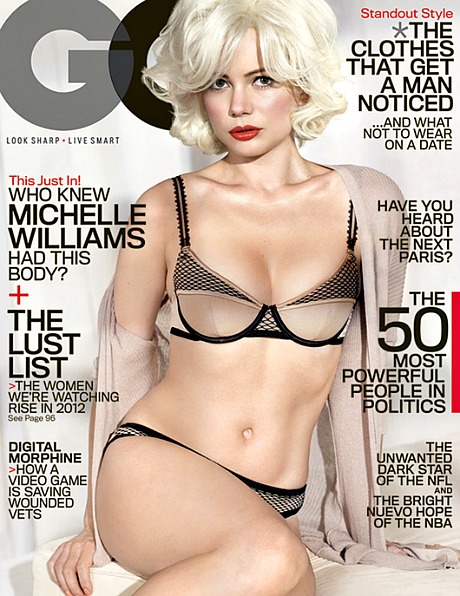 Williams’ publicist has obviously bought into O’Neil’s opinions on the subject, and so has Williams, I’m presuming. But this is a one-shot deal — magazine tokenism. On a regular day-to-day basis Williams is not appealing to aging Academy horndogs with that little pixie haircut of hers.

Williams herself recently said that her pixie cut is attractive only to “my girlfriends and gay men.” She told Elle UK that “I cut [my hair] for the one straight man who has ever liked short hair” — late husband Heath Ledger — “and I wear it in memorial of somebody who really loved it.’

Bottom line: It’s not unreasonable to consider the possibility that Williams Oscar chances might have been greater if she’d worn longer, more Marilyn Monroe-like hair over the last few months.