Part of the tragedy of New Moon is that it temporarily wraps Kristen Stewart — the GenY Marlon Brando/James Dean/Montgomery Clift — in a shroud of mediocrity. I’m not saying that Stewart has mastered her talent completely, but it’s inside her, for sure. It’s almost nauseating to see her grimming up and getting through the vampire/ werewolf paces as best she can. She seems tough and resilient enough (and seems to have a good sense of humor about it) but what a waste. 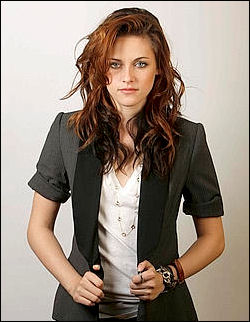 Imagine if a 19 year-old Brando had been caught up in a Twilight thing. Brando being Brando, he might have sunk into depression quicksand. Brando and Dean and Clift were almost blessed in that there were no corporate franchises when they were young and just starting to show their stuff. There was only the New York theatre and the glory days of live dramatic television and directors like Elia Kazan and Fred Zinneman and Nicholas Ray and George Stevens, etc. And yet they still found ways to be miserable. Actors are nothing if not resourceful.

I expect the usual-usual from Stewart in Jake Scott‘s Welcome to the Rileys (a young-stripper role, indie-level drama, costarring James Gandolfini and Melissa Leo) and especially Floria Sigismondi‘s The Runaways (as Joan Jett).