Introducing Sasha Stone‘s Goldtripping.com, which will basically be recollections of 20 years of Oscar-blogging. Tonally and appearance-wise, it reminds me of Karina Longworth‘s “You Must Remember This.” I could do something like this, but I’ve already established an alternate site — i.e., HE Plus. The problem is that as relentless and devotional as I am about HE classic, I’m a procrastinating dilletante when it comes to HEplus.

Every day I tell myself, “I will stop slacking off with HEplus and become a born-again devotee.” Most days I fail to do this. I’m so angry at myself, so depressed, so mortified. The other day I literally slapped myself across the face. Some days I can barely stand to look in the mirror.

Henceforth I will commit myself, dammit, to mining one of four HEplus veins or topics — (a) A modest riff on any older film, “older” being defined as anything that’s opened commercially between 1915 and last month; (b) personal tales of this and that…true and clear stories about stuff that hurt at the time, and which still linger in some gnawing way; (c) a Miss Lonelyhearts relationship advice column — twice married, 45 years of sniffing and chasing, loving and losing and making mistakes…I can bang this out in my sleep… why not dispense some of this?; and (d) End-of-the-day video recaps of the day’s posts + other topics I didn’t get to.

Colorized photos usually look like what they are. But every so often one will look exactly (and I mean exactly) right, natural and un-pushed with precisely the right shade of skin. This one actually looks too good — if a Wild One unit still photographer had snapped this Brando portrait in color during filming (i.e., early ’53), it would’ve looked a tiny bit splotchy, slightly coarser. 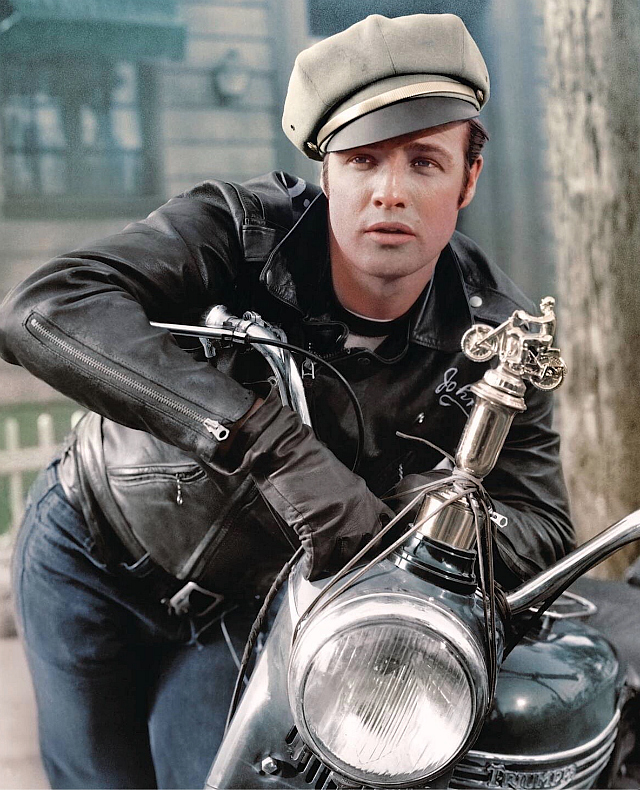 To be fair, one example of the non-Michael Douglas-y approach to making movies has to be Ryan Reynolds. And certainly Robert De Niro during his paycheck phase of the early-to-late aughts. Post-Sleuth Michael Caine, or for most of his life. Cuba Gooding during his post-Jerry Maguire cash-in period. Everybody makes a crap movie now and then. Goes with the profession. 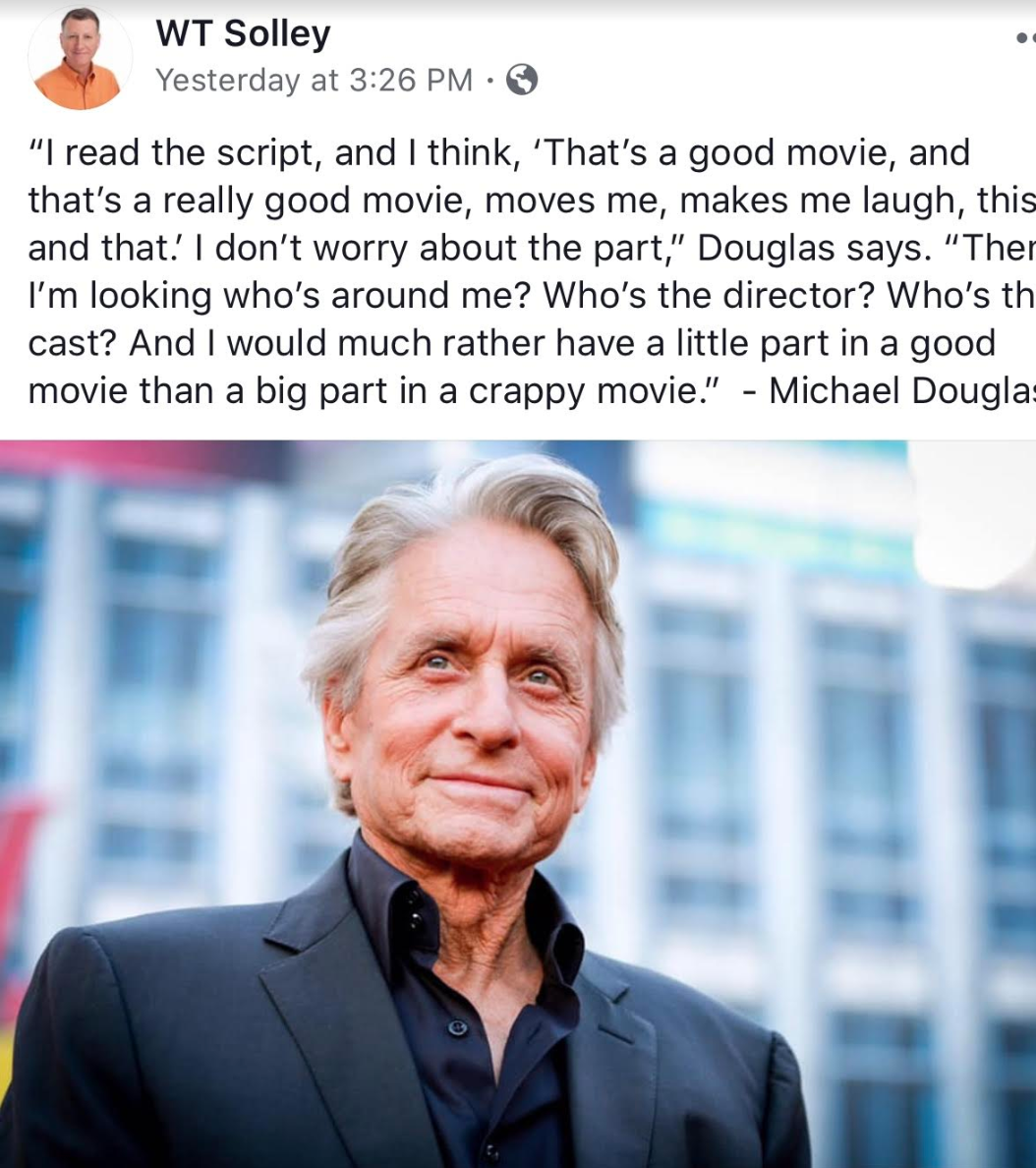 88 Comments
Back to the Salt Mines

Variety‘s Owen Gleiberman: “Sequels exist, as art and as business, to remind you of something that existed before. They are parasitical by design. That’s why, well into the ’90s (the era of Another 48 HRS, RoboCop 2 and Speed 2: Cruise Control), they were a form greeted with a mixture of (momentary) enthusiasm and (mostly) mockery.”

HE: There are still only two Star Wars movies of serious consequence — The Empire Strikes Back (which is approaching its 40th anniversary) and to a slightly lesser extent the original Star Wars: A New Hope. Some of the Star Wars films made over the last four decades have been marginally exciting or diverting or harmless as far as they went, but none even came close to packing the mythical cliffhanger punch of The Empire Strikes Back.

Since 1983 and the arrival of the mostly underwhelming Return of the Jedi, they’ve all been about one thing and one thing only — i.e., cashing in on the lore. And that, from my perspective, has never been a compelling thing to wade into.

Q: What’s in it for me?
A: Well, if you like it you’ll feel good and fulfilled. And if you don’t…well, not a whole lot. Ether way they basically just want your money.

Gleiberman: “Star Wars has come to represent a kind of capitalist religion: the notion that Hollywood can create a universe that’s so powerful, such a golden goose, that it never has to end.

“The birth of the Marvel Cinematic Universe, in 2008, was a direct iteration of this philosophy, one that emerged in spirit out of what George Lucas had accomplished with his prequels. And in an odd way, it was the very mediocrity of The Phantom Menace and Attack of the Clones and Revenge of the Sith that became central to their meaning in the global entertainment marketplace. The mediocrity suggested that when the brand is mythological enough, ‘if you build it, they will come…even if the films don’t measure up.’

HE: The general presumption is that Game of Thrones creators David Benioff and D.B. Weiss were “summarily dismissed” from the Star Wars universe (i.e., an attempt to create a whole new world of Star Wars-like characters and narratives) because they weren’t able to shake off their drive and personality and become docile stooges for the Disney Empire — cogs in the corporate mechanism. They presumably wanted to do that to some extent, at least in the beginning stages, but it wasn’t in them. Their visions were too far afield of the generic Star Wars template.

Roughly a month ago I read a flattering Medium piece about Pete Buttigieg — “flattering”, that is, as in factual. I’m asking all the HE hang-backers (the ones who constantly say “Pete is too young, too inexperienced, the culture isn’t ready for a gay President, he’ll have another shot”) to just read it. It’ll take you all of nine minutes.

And then you can go back to your embrace of Typewriter Joe or Elizabeth Warren — either of whom I would be okay with (i..e, disappointed but accepting) if they won the nomination. They’re just not as vital, exciting and ideally suited to the 20s as Pete. Being older in years means nothing — it’s about brains, judgment, humanity and character.

Who is the wiser, smarter and more mature person, Greta Thunberg or Donald Trump? 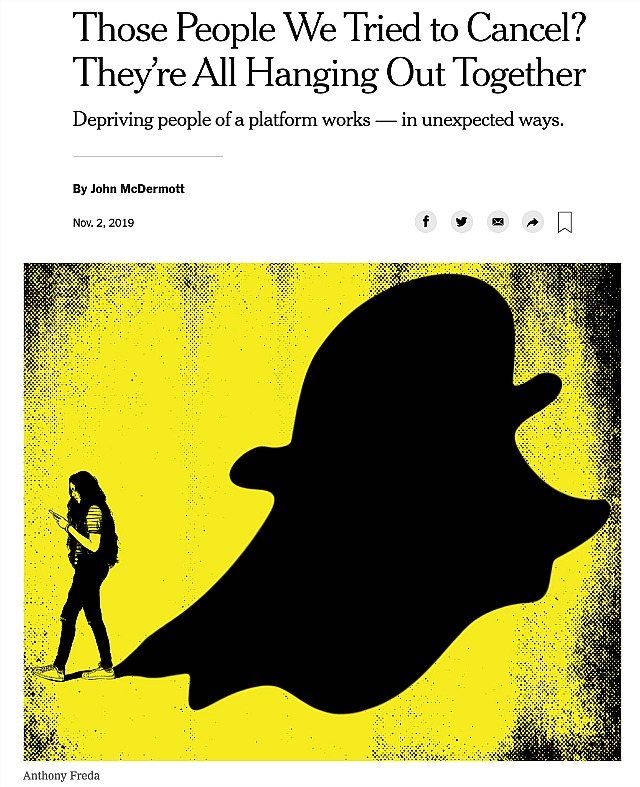 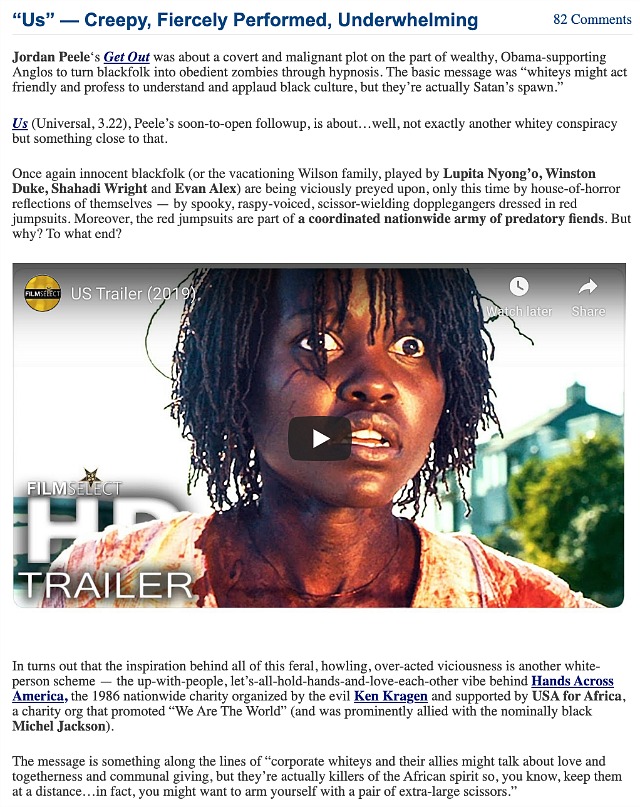 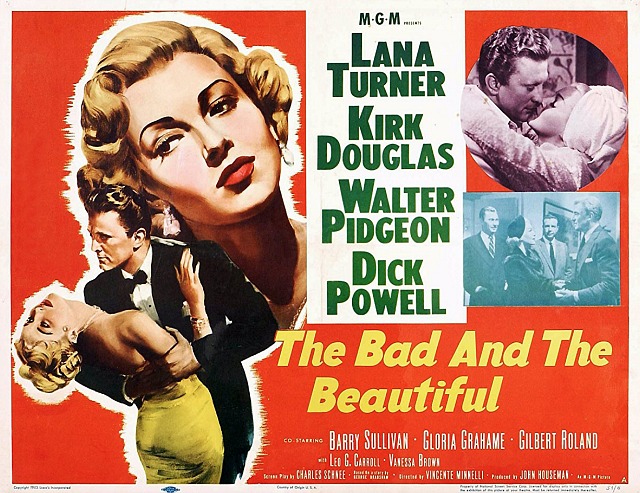