Benicio del Toro as the Wolf Man…down with that. But you know what gets better and better with each viewing, if you take out the final 20 minutes? Mike Nichols’ unforced and sophisticated Wolf…what was that, 12 years ago? The more I think about it, the more I think it might be my all-time favorite, simply because it’s the most adult. The del Toro pic has 7even‘s Andrew Kevin Walker writing it. I’m not sure what that means.

“If a script isn’t new or daring in some way…subject matter, plot turns…if it doesn’t push the envelope nobody wants to make it because they’re afraid everyone’ll be bored because they’ve seen it before. But once they greenlight an envelope- pusher they always get nervous because they start worrying that Middle American popcorn-munchers won’t want to see it.” — Seasoned producer to Hollywood Elsewhere columnist during a cell phone conversation last night (3.14) around 10:10 pm after a screening of Spike Lee’s Inside Man (which isn’t, by the way, a daring envelope pusher but is satisfyingly nervy and different as far as Manhattan bank-robbery movies go, and is a lock to appeal to Middle Americans everywhere).

Okay, so George Clooney didn’t actually pour himself a cup of coffee, turn on his laptop, sit down and bang out that column he ostensibly wrote for the Huffington Post…which was recently de-posted. Here’s Arianna’s explanation about how it went down.

No Comments
In this Time Richard Corliss

In this Time Richard Corliss piece about the battle between celluloid and digital photography, director Michael Mann (Collateral, Heat) argues that digital is “capable of a chromatic subtlety that film can’t match.” Collateral, Mann claims, was “the first photo-real use of digital…[and] in the nightscapes in Collateral, you’re seeing buildings a mile away. You’re seeing clouds in the sky four or five miles away. On film that would all just be black.” Mann used the same digital process to shoot his big-screen version of Miami Vice with Colin Farrell and Jamie Foxx. 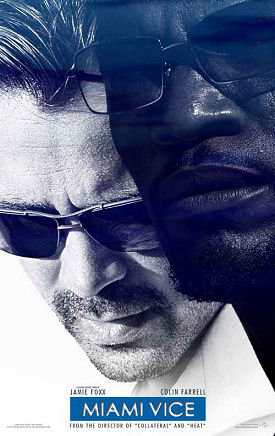 MSNBC’s Dave White giving props to actress Vera Farmiga for “making them all finally pay attention. I had no idea who Farmiga was until [I saw] Down to the Bone where she played a deadpan drug mom, struggling to keep both food on the table and sober, only to lose her job by admitting that her performance at her grocery clerk√¢‚Ç¨‚Ñ¢√É‚Äû√É¬¥s job was enhanced by cocaine. And she’s got a clear-eyed resolve that Anthony Minghella and Martin Scorsese both must have noticed because she’s about to work with both of them.” No biggie, but what White really means is that Farmiga has already worked with Scorsese on The Departed and with Minghella on Breaking and Entering, and that both will open later this year.

An excellent defense of V for Vendtta by David Poland in his Hot Button column. “V for Vendetta is, simply, a wake-up call. The film is not about terrorism, though it is about terror. The film is not about threatening civilians to make a political point in any way. It is about threatening a state that has lost control of itself, absolutely corrupted by absolute control. But for control to be absolute, the people must remain asleep. It is, perhaps, instructive that the extreme right wing — which I never realized had a representative in Newsweek‘s Jeff Giles — feels compelled to pull out all kinds of rhetoric to kill the movie.”

No Comments
A journalist doing a story

A journalist doing a story about the possible fading of IMAX says he’s spoken with solid tech-industry sources (Dolby, Tehnicolor, IT Access, In Three, etc.) and they all seem to believe that the rollout of digital and 3-D digital projection in the big theatre chains is imminent. So do I think that this digital rollout will render IMAX obsolete? I replied, “Not to get all primitive on you, but there’s something extremely cool and oh-wow about watching a movie on that huge friggin’ screen. Digital and 3-D digital in regular theatres sounds fantastic and bring it on, but typical theatre screens are…what?…10 or 12 feet tall? The IMAX screen is 40 or 50 feet tall, and that’s big. It’s been years since I was 12 years old, but I’m telling you (and I can’t emphasize this strongly enough) that simple grandeur matters.”

Columnist Alan Lopuszynski agrees with my just-posted WIRED observation about the girl-on-girl subtext in the Wachowski movies, but adds, “No need to stop at Bound and V for Vendetta, really…what about the entire world of The Matrix, in which androgynous freedom fighters strive to awaken from a fantasy world in which everything they know is a lie? Where ruthless, society-controlling agents (hmmm…who are all men) try to force the ‘we just want to live our lives the way we want’ rebels into ‘normal’ lives of acceptance? What about the perponderance of fetish gear? I’ll tell you, when news Larry’s red-pill lifestyle broke between Matrix and Matrix Reloaded, a lot of the more confusing motivations of that entire franchise became very clear indeed.”

I’m sorry, but those Michael Douglas quotes about Brangelina, Renee Zellweger and Julia Roberts in the April issue of GQ are funny. Funny in the sense that Douglas is apparently getting into that Shirley Maclaine mode…i.e., a celebrity who’s done it all and is tired of playing the game and has adopted a come-what- may-but-I’m-gonna-say-what-I-think attitude, and if certain people don’t like this, too bad. “I don’t know about Brad Pitt leaving that beautiful wife to go hold orphans for Angelina [Jolie]…I mean, how long is that going to last?” Douglas said. “[And] don’t ask me what happened with Renee Zellweger (turning on a dime and annulling her marriage to country singer Kenny Chesny). I don’t know how you get married for four months. And Julia [Roberts] with Lyle [Lovett].”

Diallo Tyson of Woodbine, Georgia, happened to see John Milius‘s Red Dawn (1984) the other night, and was struck by the parallels between how the Wolverines (Patrick Swayze, C. Thomas Howell, Charlie Sheen, et. al.) respond to the Russian/Cuban invaders of the U.S.A., and how those no-good Iraqi resistance guys have been responding to the U.S. invaders since ’03. And how both have vague echoes in the Wachowski’s V for Vendetta. Red Dawn‘s Wolverines, says Tyson, are “a band of insurgents determined to fight and get their country back. They steal munitions, blow up envoys, set up ambushes, and other general terrorist activities. They don’t really succeed in the end but they put up one hell of a fight. When Dawn was first released, it was described as a piece of right-wing jingoistic-patriotic schlock. But when I was a kid I loved it. You wanted the Wolverines to kick some Russo-Cuban butt, and I know I wasn’t the only one who felt that way. I’ve just mentioned it because this reminded me of some of the criticism V For Vendetta has been getting. I believe you ran a recent quote from someone saying in effect, ‘How can we cheer for a guy in a mask who is a terrorist?’ Well, we’ve cheered for terrorists before….obviously a lot can change in 22 years.” The notion of Wolverines as terrorists (which of course they are, albeit sympathetically portrayed) carries a double irony in that the effort to capture Saddam Hussein in Iraq was called Operation Red Dawn, and, according to Wikipedia, the name came from an American commander, Col. James Hickey, who “was a fan of the Milius film.” He also dubbed the military units who actually captured Hussein ‘Wolverine One’ and ‘Wolverine Two’ after the fictional Wolverines unit in Red Dawn.” I trust the ironies have sufficiently sunk in and I don’t have to trot out the old chesnut, “One man’s terrorist is another man’s freedom fighter.” (I called Milius three times about this yesterday, explaining the gist of my journalistic interest in one of my phone messages, and he never got back…which isn’t like him. He knows me, we’ve spoken over the years, etc.)

Call this invasive prying, but all art is personal and if you can’t stand the heat don’t pick up the paint brush. I’m referring to the obvious echoes of Larry Wachowski‘s transgender personal life in his and brother Andy’s V for Vendetta (Warner Bros., 3.17), as well as Bound, the Wachowski’s 1996 crime drama. Both deal with passionate love affairs between women, and given that Larry, who’s been a woman for the last two or three years, has been paired with a dominatrix namd Karen Winslow (a.k.a., Ilsa Strix) and…well, it’s fairly obvious. And yet there seems to be some kind of p.c. embargo about discussing the girl-on-girl subtext in the Wachowski gallery. As I understand the rules, it’s permissible to tough upon Alfred Hitchcock’s passion for icy blondes and his real-life thing for Tippi Hedren in a past-tense context, but discussing the Wachowski-lezzie angle in the present tense is a no-no…got it.