Another 3-Disc Apocalypse Now DVD Story: “That Circuit City third-disc Complete Dossier deal was advertised here in a flyer that appeared in the Philadelphia area, which is why I went to Circuit City to get it, not to mention the fact that their $12.99 price beat out Best Buy’s $14.99,” writes Feeling Lucky in Philadelpha.

“So I showed up early and scanned the displayed copies. None of them had any identifying markers on them, so I assumed they all came with the extra disc. But while I was doing this, I noticed a Circuit City employee going through the stock copies on the bottom rack and comparing them. Then he pulls one from stock and disappears. I grabbed a display copy from the rack (you’d think I would have taken a moment to check the stock copies like the clerk), bought it, headed home, opened it up and found no extra disc inside, so I turned right around and head back to the store.
“I asked the clerk I’d seen rummaging through the stock copies why mine didn’t have the extra advertised disc. ‘Uhm, did it have a sticker on it?’ he asks, at which point I notice the stickered copy he’d pulled for himself on the counter. He walked me over and explained that they’d only gotten 3 or 4 copies with the sticker, and then he searched through the stock copies and gets me one.
“Even though he pulled only one copy for himself, it still felt like he’d intentionally jobbed all the stickered copies into the stock section where no one would look. Was he still making up his mind about how many to hoard? Who knows? But I can tell you that they did advertise the damn thing and I thought it was awfully strange that out of the 20 copies or so available, first day mind you, only three or four had the advertised extra disc.”

I’m thinking of a Career Chiller Top Ten — a rundown of the best actors and actresses of the last 15 or 20 years whose careers suddenly stalled for no apparent reason. Their talent didn’t evaporate, they didn’t get fat, they didn’t get pinched for child molesting…but the wheels just stopped turning. This happened to poor Ned Beatty for a while over, I was told, an inside-the-industry sensitivity issue. John Travolta went cold for a while, of course, but that was mostly over lousy choices and the curse of Jonathan Krane . Whatever happened to Shelley Long? Bridget Fonda? Bijou Phillijps? With every career freeze, there’s always a political story that goes with it. Send these along too, if anyone can think of any good ones. The best, of course, are the ones that end with the actor getting back in the groove and finding work again.

I’ve seen Martin Scorsese‘s No Direction Home: Bob Dylan three times now — once at the ’05 Toronto Film Festival, twice on DVD. Why is it, then, that I’m seriously contemplating going to see it again as the final showing in the Aero’s “Mods & Rockers” series on Sunday night (8.27)? I’ve thought it over, and all I can figure is that it feels immensely cool to soak in the specialness of that early-to-mid ’60s Dylan thing, which isn’t “better” than the bolt around the current Dylan album or the late ’90s incarnation or the one that happened in the mid ’70s when he sang “Hurricane.” I only know that the ghost of electricity howled in the bones of her face only once, and then it very gradually faded over time.

I’ve heard a couple of good things about ABC’s five-hour TV movie The Path to 9/11, which will air over two nights — Sunday, September 10 (8: to 11:00 pm, PT/ET) and Monday, September 11 (8 to 10 p.m., PT/ET). It’s about the lead-up to the 9/11 tragedy starting with the 1993 World Trade Center bombing. The director is David L. Cunningham, the writer is Cyrus Nowrasteh, and the principal star is Harvey Keitel playing John O’Neill, the onetime FBI agent and WTC security consultant who was killed on 9/11.
I’m going to try and score a DVD screener, as it’ll be pretty damn difficult to give this film my full attention during the Toronto Film Festival, which starts on 9.7 and lasts until 9.17.
Cunningham’s film is obviously going to overlap over Paul Haggis’s Against All Enemies, a feature based on Richard Clarke‘s book of the same name. Haggis was going to direct a film with Sean Penn as Clarke and Vince Vaughn as John O’Neill, but I don’t know. I’m getting a funny back-of-the-neck feeling about this one. I think it may go south.

CNN will run a replay of its coverage of the 9/11attacks as it actually happened in real time on 9.11.06 on CNN Pipeline, starting at 8:30 ayem and ending at midnight. That means not on CNN’s cable station but online…kapeesh? The 9/11 viewing will be available for free that day — viewers normally pay $2.95 monthly or $24.95 per year. Iinteresting. (I almost wrote kewl.) But why not also make the full-day coverage available via a DVD box set of some kind?

I’ve heard from several people that there’s been some kind of unadvertised deal between Paramount Home Video and Circuit City to provide an Apocalypse Now: The Complete Dossier DVD package that contains 3 DVDs if — and only if — you buy it at Circuit City. And here’s a review on DVD Talk that mentions this Circuit City-only “third disc” version. And yet these versions were apparently recalled a few days ago and can no longer be found at Circuit City stores. 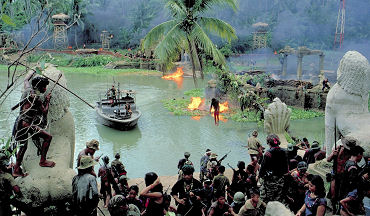 The review, amended on Sunday, 8.20.06, says, “Thanks to DVD Talk reader Ryan, who passed along this detailed information about Paramount’s bizarre decision to offer excised material from the first two DVD incarnations of Apocalypse Now as a bonus disc exclusively carried by Circuit City in limited supplies: ‘Please note that there is a Bonus Disc Three available exclusively at Circuit City. The disc has this written on it: ‘The Added Scenes and Expanded Themes of Apocalypse Now Redux’; Destruction of the Kurtz Compound with Optional Commentary; 1979 Theatrical Trailer; 2001 Trailer.
“The disc is packaged inside the cardboard outer sleeve and behind the digipack. Editions with the bonus disc will have a sticker on the outside which says “Exclusive Free Bonus Disc With Purchase of this DVD While Supplies Last.” Editions with the free bonus disc have a different UPC barcode: 032429010995.” It’s also worth noting that the ‘excerpts from the original theatrical program’ found on the first DVD have still not turned up anywhere, so again, Apocalypse Now enthusiasts would do well to hang onto at least the first DVD release.”
And yet I’ve called four Circuit City stores today (Saturday, 8.26) and spoken to six or seven employees, and they all said that (a) the Apocalypse Now: The Complete Dossier double-disc set isn’t sitting on the shelves, and (b) they had no idea there was a three-disc version being offered exclusively at Circuit City. The awareness and sophistication levels of these people was not impressive. Two asked me repeat the name “Apocalypse Now”, as if it was the name of some exotic herb.
Only one Circuit City employee had a clue about what I was talking about. Apocalypse Now: The Complete Dossier has been recalled, said an assistant manager at the Burbank Circuit City branch on First Street. The discs were sent back “about four or five days ago,” she said. The double-disc version is available in all the other stores at a price of $16 dollars and change (or thereabouts). Circuit City was asking $14.99 when they had them. 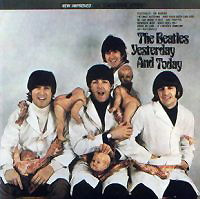 Reader Ernie Souchak writes, “I don’t know if Circuit City is a Viacom company, but this deal is really obnoxious, and should piss off everyone else who’s selling this package, not to mention fans whose ‘Dossier’ is less complete than others’.” A friendly clerk named Lon at West L.A.’s Laser Blazer says two or three people have come into the store talking about the Circuit City-only, three-disc version and said they’d bought it, etc.
It’s looking like those three-disc Dossier DVDs are going to acquire the reputation of that Yesterday and Today “butcher block” Beatles album from 1966 with the severed baby-head and chopped-meat cover photo. The purported offensiveness of this immensely cool cover photo resulted in a sudden recall by Capitol Records before the album arrived in record stores.
If Paramount wanted to set this whole thing straight, they would assemble a genuine Complete Dossier with George Hickelnlooper and Fax Bahr‘s Hearts of Darkness: A Filmmaker’s Apcalypse, a truly great 1991 documentary about the making of the film, and then issue that sometime later this year — a four-disc set in all.

POV Online’s Mark Evanier is arguing that the Bruno Kirby- Billy Crystal piece by Nicholas Stix that I linked to yesterday (i.e., the one that suggested that Crystal might have been a “career-killing ogre” as far as Kirby was concerned). I don’t know anything about this, but Evanier makes some good arguments. I ‘m disputing one of them, though, and I want to point out something he didn’t mention:

Crystal later says to Wloszczyna, “This is a perfect situation. We’re here to talk about the movie, and you’re talking about something personal or whatever it is that happened, I don’t know, eight, nine years ago.” That’s an obvious tipoff that speaking about Kirby is an uncomfortable thing for Crystal. And saying the words “personal or whatever” is another lie — he knows it was personal and he’s saying “or whatever” to cover it up.