I meant to link to this Tom Tapp/Hollywood Wiretap story yesterday about Premiere subscribers being angry because Jann Wenner has bought their addresses and subscription deals and will be sending them Us magazine instead. I didn’t get to it because I was packing and running around, but also because anyone who pays money to receive mailed copies of paper publications is living in the past anyway so what do I care? On top of which it’s not that startling to hear that a corporation is trying to invade and re-arrange the reading materials of old-school magazine subscribers.

A very big hint about my current whereabouts is in the size and radiant color of the leaves on this tree. Okay, a tree growing in Brooklyn. There goes the guesswork. 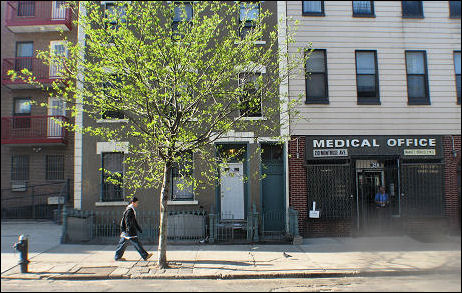 Meditative moment this morning on the way back from El Brilliante, the Montrose Ave. breakfast joint, and my last decent L.A. shot — taken Thursday, 5.3.07, 5:20 pm

One of the things I truly love about being back east is the way everything starts popping through in late April-early May. Not to dismiss those blue-violet Jaracanda blossoms that explode sometime around May or June in Beverly Hills. but the east-coast spring flora colors have this transporting quality. They’re enough to make you stop power-walking and just stop and and let it all in,which is precisely what I did this morning around 8:15 ayem.

Last week L.A. Times columnist Deborah Netburn asked the usual web suspects — David Poland, myself, Garth Franklin, myself, Leonard Klady, etc. — for opinions about the likely big winners, losers and surprises of the coming summer season. The piece went up today. Here’s the opening page, and here’s the page with my blah-blah.

Netburn quoted me quite liberally (thanks!) but here’s a portion that got cut: “The question shouldn’t be about how many hundreds of millions the obvious biggies — Spider-Man 3, Pirates of the Caribbean: At World’s End, Transformers, etc. — are going to make. The question should be how do audiences really and truly feel about contributing to the wealth of the mega-corporations and special-effects house and superstars who are going to profit from their lemming-like patronage?”

Toronto Star critic Peter Howell is lamenting the current dominance of one- or two-word bullet movie titles like Next, Vacancy, Fracture, Disturbia, The Invisible and The Condemned. “Whatever happened to movies with evocative titles like The Trouble With Harry, The Man Who Knew Too Much or Whatever Happened to Baby Jane?,” he’s asking. 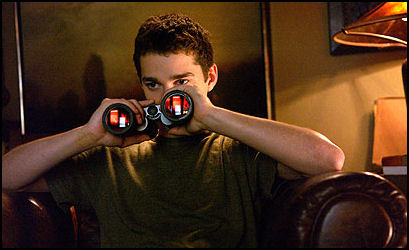 Howell asked me for a quote about this and posted a portion of what I sent him, but here’s the whole schpiel:

“Hollywood has always kept titles down to two or three words. Occasionally a four-worder like The Guns of Navarone slipped through in the ’60s, but more often not. That said, if some American producer were to remake Shoot The Piano Player today, it would probably be called Piano Man or Chords or something along those lines.

“Hollywood marketers have been on a campaign against marginally high-falutin’-ish titles for a good 25 or 30 years, or roughly since the advent of the mass-market blockbuster movie syndrome, which kicked off with Jaws in ’75 and then Star Wars in ’77.

“Why did Columbia and Taylor Hackford drop the allusive and haunting Out of the Past (’47) in favor of the more macho, two-fisted sounding Against All Odds when they did their 1984 remake ? Four syllables, one word shorter…that was one of the first modern-age dumb-down moves along these lines that I can remember.

“How about Bertrand Tavernier‘s currently shooting In the Electric Mist, with Tommy Lee Jones in the lead role? James Lee Burke‘s original book title is “In The Electric Mist With the Confederate Dead” — a fantastic title. Couldn’t fit on the marquee but wow, what a great choice of words!

“One-word bullet titles are easier to remember for people who haven’t made much of an education, and of course shorter is almost always better in our attention-deprived world, but titles with poetic or allusive qualities are even less in favor now than ever before.

“The reason is because of the under-35 cyber generation is a shorthand generation in more ways than one. The relentless clutter of information and images that pour into our computers and PDAs demands a savage pruning on the part of the reader, video-watcher and movieoger. They speak cyber-ebonic in their text messaging — “r u coming to the party?”, “LOL”, etc. — and this is the kind of language by which they process the world. Marketers, one could argue, are simply following suit.

“I personally prefer Do Androids Dream of Electric Sheep? to Blade Runner, but that’s just me.”

“Scrap the Black Vines of Doom and Spider-Man 3 becomes a fable about how success makes monsters of us all (a story that Sam Raimi, helming one of the top-grossing franchises in movie history, no doubt knows something about.)” — from Dana Stevens‘ Slate review. Sounds like she may have been alluding to bitter Danny Elfman comment about Raimi having become a changed man between the making of the original Spider-Man and the sequel. 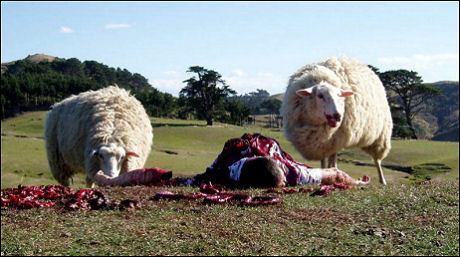 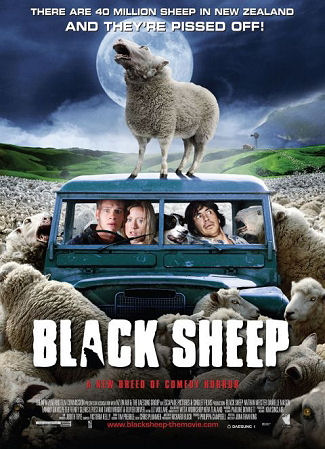 Oscarwatch.com‘s Sasha Stone doesn’t appear to consider me a friend or a supporter any longer because she didn’t send me those May 1st AMPAS lawsuit papers from Quinn Emanuel Urquhart Oliver & Hedges, LLP. Probably because of that pissy business from two or three days ago. But I am her supporter and ally as far as her problem with the Academy is concerned.

They’re bullies, these guys….throwing lawyers and lawsuits at a single mom who intelligently promotes the Oscar hoo-hah like a clean machine and who makes the Academy membership and their emotional-whimsical preferences seem much more important than they actually are in the grand scheme. or in any scheme. Shame on the Academy poobahs who pushed and hammered this thing along. Could they be trying to get themselves nominated for a 2007 Odious Award?

I think Sasha’s going to have to change her domain name. I told her months ago she should go for www.sashastone.com. Nice and recognizable..no fuss.

I’ve just returned from a 20-minute junket quickie with Parker Posey. The general plan was to talk about Fay Grim (Magnolia, 5.18), her new Hal Hartley movie, but we kind of veered from topic to topic. Here’s the mp3 of our…I was going to say “discussion.” Call it a chat or a ping-pong match with nobody trying to win. 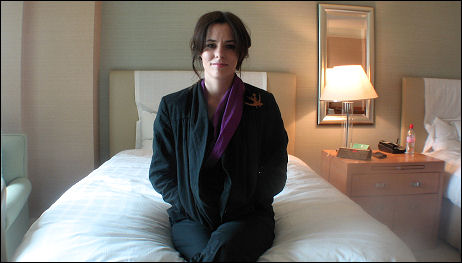 I don’t mean to ignore Fay Grim, which is dry and quirky-funny and not at all half bad. It’s just have to wait until it’s time.

I had a nice chat yesterday with Mimi Freedman, the writer- producer of Brando, the two-part Turner Classic Movies doc that ran last Monday and Tuesday nights. (You can’t tell from TCM’s website if any other showings are slated.) Warner Home Video will release a Brando DVD “sometime in the fall,” I’ve been told. Freedman told me that Martin Scorsese once tried to get hold of any discarded footage (or reels) of One-Eyed Jacks, Brando’s only effort as a director, but that he was unsuccessful. 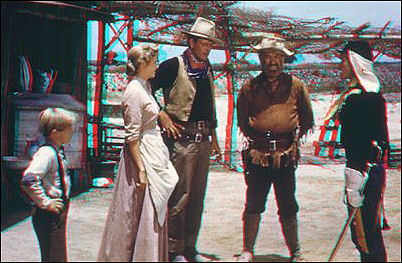 And Curtis Hanson‘s Lucky You, an unquestionably half-decent poker movie, has, so far, a 20% Rotten Tomatoes rating with guys like the Hollywood Reporter‘s Kirk Honeycutt calling it “dull, dull, dull.” Wrong, wrong, wrong — it’s simply one of those films that chooses to stay with character and the reality of the setting and the story. I didn’t slump, nod off or shift in my seat once….it’s fine. The only two guys who seem to get this so far are the Arizona Star‘s Phil Vallarreal and Kevin Laforest of the Montreal Film Journal.

Anthony Lane‘s New Yorker pan is glorious fun; it makes you feel as if you’ve almost seen it:

“In an early scene, a meteorite crashes to Earth, and from it crawls what seems to be a tiny garbage sack with half a mind of its own: not a bad image of where this film belongs. And, would you believe, the first person this superblob attaches itself to is, yes, Peter Parker ((Tobey Maguire). It doesn√É¬¢√¢‚Äö¬¨√¢‚Äû¬¢t choose him; nobody has targeted him — of all Earth√É¬¢√¢‚Äö¬¨√¢‚Äû¬¢s inhabitants, he just happens to be close by.

“Is this truly the best that the filmmakers can be bothered to do for our delight? Just how easily and stupidly pleased do they presume we are? Peter√É¬¢√¢‚Äö¬¨√¢‚Äû¬¢s college professor (Dylan Baker) declares that the black stuff ‘amplifies characteristics of its host.’ Fine, and I vaguely understand what occurs when it latches onto Eddie. The first host, however, is Spider-Man himself, and this is where the film becomes so embarrassing that you have to crouch down and stuff popcorn in your ears.

And this: “It is thrilling to imagine what Guillermo del Toro, who made Pan√É¬¢√¢‚Äö¬¨√¢‚Äû¬¢s Labyrinth, or the James Cameron who brought us Terminator 2: Judgment Day, would do with Thomas Haden Church‘s Sandman. Both directors are obsessed with shapeshifters — with their sad restlessness, their ability to conjure threat out of the apparently fragile. The director of Spider-Man 3, Sam Raimi, is unconcerned by such niceties; to him, Sandman is just a bullying baddie against whom Spider-Man (Tobey Maguire) must pit his web and his wits.”