A guy sent me an October 2006 script for the Farrelly Brothers‘ The Heartbreak Kid (Dreamamount, 10.5.07), which stars the rapidly graying Ben Stiller.
The cover page says “Most Recent Revisions by John Hamburg and Peter Farrelly,” and then “Revisions by Peter Farrelly, Bobby Farrelly and Kevin Barnett,” and then “From a short story by Jay Friedman” and “Adapted from the original screenplay by Neil Simon,” and then “Previous revisions by Leslie Dixon & Scot Armstrong.”
“Leslie Dixon did the first draft,” the guy explains, “and it was pretty good before it became Farrelly-ized. Her draft attracted Jason Bateman for the lead part, but the Farrelly drafts attracted Stiller. Although the movie tested higher than There’s Something About Mary, they went back to re-shoot the ending a few times to make it just right.”

The image is unnatural — squeezed into 1.37 to 1 when it should be 16 x 9 — but Variety columnist Anne Thompson has an exclusive on the new trailer for Joel and Ethan Coen‘s No Country For Old Men. 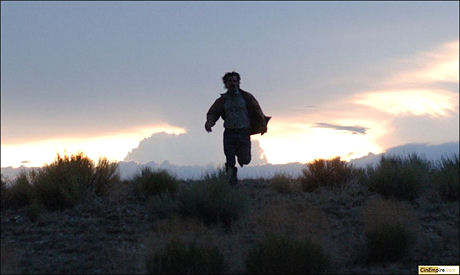 The Miramax marketing guys have made this marvelous film look like an action-horror flick about a stalking ogre with an early ’80s haircut (Javier Bardem‘s “Anton Chigurh”) out to kill and kill again like the most ungodly and merciless Jason/Freddy Krueger psychopath of all time. And he is that, yes, only much, much funnier. And the movie isn’t an action-horror film. It’s much deeper and darker than that.

The Academy of Motion Picture Arts and Sciences has finally responded to storms of criticism that came down early this year when they declined to nominate Little Miss Sunshine producers Ron Yerxa and Albert Berger as recipients for the Best Picture Oscar because of a dumb-ass rule stating that only three producers can be eligible. 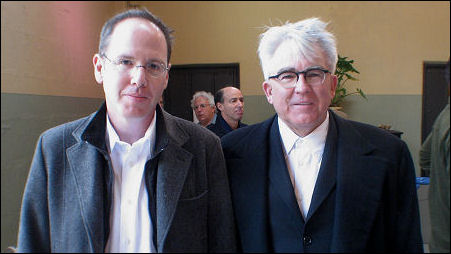 Now the Academy will consider more than three producers if and when the situation involves “a rare and extraordinary circumstance.” The new decision was “adopted by the film academy√É¬¢√¢‚Äö¬¨√¢‚Äû¬¢s 43-member board of governors on Tuesday night,” according to N.Y. Times reporter Michael Ciepley. 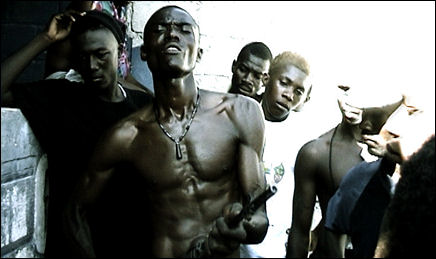 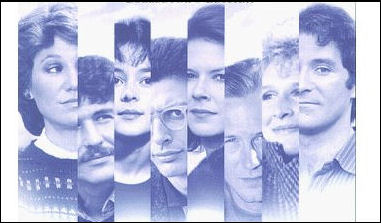 Allan Murray and Sean Haines‘ “Paris in Jail” parody video is…not bad. Amber Hay, who plays the jailbird heiress and voices the vaguely catchy song, is slightly more hoochy-kooch than Hilton herself. Here’s the “Hurry Up!” version of same. 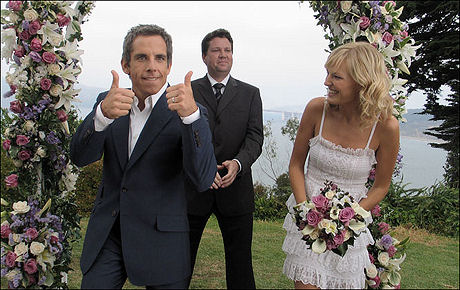 Going by the trailer, Caro suspects the feature may be a cowardly, slapstick-shallow, hopelessly dumbed-down non-echo of Elaine May‘s original The Heartbreak Kid (1972), which was funny but at the same time traumatic, angst-y and occasionally cruel. My favorite scene was the abrasive after-dinner confrontation between Grodin and Eddie Albert (i.e., playing Cybil Shepherd’s dad), in which Albert tried to buy Grodin off.
Caro understands, of course, that every remake of a film made in the ’60s, ’70s or ’80s has to be cruder and dumber than the original. He realizes that today’s under-35 moviegoer need things to be broader, louder, blunter, etc. “Hit me with it!…no, pour it over my head!” works much better than “nudge me in the ribs” or “whisper it in my ear.” Nonetheless, Caro is pissed.

It’s always somewhat depressing when a masterful older actor who’s enjoying one of those rare late-period career grooves accepts a straight paycheck job as a villain in an empty-ass franchise flick.
I mean, just reading the damn trade stories about same deflates your world. Oh, that’s right, you tell yourself — I forgot that what a pleasure it is to watch amazingly talented performers punch a clock and debase themselves. Every so often, life requires us to bend over and hold our noses in order to pay the bills, but it’s extra-gloomy when guys like William Hurt succumb.
Here’s an indication of what Hurt is facing and why he’s more open than usual to straight-paycheck jobs.

I’m trying to imagine the mass incomprehension and shock waves that would result if a U.S. President were to deliver such a speech in today’s paranoid climate. Forget the nostalgic aspect — just try to imagine a U.S. President actually speaking these words. The mentality behind it is so far above and beyond the realm of the current White House occupant that the speaker sounds almost like someone from another planet, or certainly like a being created from a wholly different gene pool.

More proof positive that Steven Spielberg doesn’t get what’s going on out there, and lives in a rich-older-liberal-guy realm that allows for only brief glimpses and glancing comprehensions about the political and cultural truth of things.
Spielberg’s powers of perception about the shape of shifting sands are obviously dwindling, which means, of course, that Indiana Jones IV won’t be as good as Indiana Jones and the Last Crusade, much less Raiders of the Lost Ark, because if you’re missing stuff in one arena, you’re almost certainly missing stuff in other realms. You’re either sharp all around the track or you’re not.
Hilary is a shrewd, tough, savvy politician — I respect her as far as it goes — but she is Old News, she is the ’60s and the ’90s, and she will certainly bring the Democrats down to defeat in November 2008. Rudy Giuliani, if he’s nominated, will most likely beat her, and Fred Thompson, who will probably be the Republican nominee (he essentially announced last night on Jay Leno) will absolutely whip her ass.

Michael Moore‘s Sicko is “agitprop,” says Toronto Star national affairs columnist Thomas Walkom, but “it is fundamentally accurate. Moore is making a film for Americans, and what he is telling his compatriots is very simple and very true: that America’s refusal to embrace some kind of universal health care system makes absolutely no sense.
“Nor, outside of the U.S., is this a remotely controversial point. In Canada, no one except for a few diehards in the right-of-center Fraser Institute lionizes the U.S. system. Dr. Brian Day, the incoming head of the Canadian Medical Association, is a vigorous critic of Canadian medicare. But he touts French or German medicare, not the U.S. model. Ditto Preston Manning, the former Reform party head. He says he wants a two-tier system that would keep the existing universal system.
The reason is simple. Universal public medicare works √É¬¢√¢‚Äö¬¨√¢‚Ç¨≈ì which is why every industrial country outside of the U.S. employs some form of it.
“For those who choose to read the scholarly literature, the evidence is overwhelming. Americans spend more per capita on health than any other nation in the world and get worse results. This is not just Michael Moore talking; it is the Organization of Economic Co-operation and Development. When Moore says Canadians live on average three years longer than Americans, he is correct. When he says infant mortality rates are lower in this country than the U.S., he is right there too.
“It’s not just Canada. United Nations figures show that a baby born in Havana has more chance of surviving than one born in New York City. The British live longer than Americans as do the French and Japanese. Is it simply coincidence that all of these countries, save the U.S., have some form of universal public care system?”

“There’s no room for the concept of profit when it comes to taking care of people who are sick. Those questions of ‘how will this affect our bottom line? How will this affect our profits?’…these are immoral questions, and they should never be asked. We have to eliminate the private health care companies from the health care system. It’s time for them to go!” — Sicko director Michael Moore speaking at a very recent health care rally in Sacramento.