I just saw this ten minutes ago. A gradual sinking, a metaphor…something. Pretty damn intense. Those red eyes and skin rashes. Fierce and paranoid imaginings. Beautiful dancing. Portman is really losing it. In a riveting way, I mean.

How good can a Bluray of The Bridge on the River Kwai look? At best the color will appear a bit more saturated with slightly more sharpness than the DVD. Hunky-dory. But nobody’s going to have an orgasm or fall on the floor when they see it. The 1957 film was shot on 35mm and almost entirely outdoors, and has a utilitarian look for the most part. Some of it just looks good; other parts look fair. 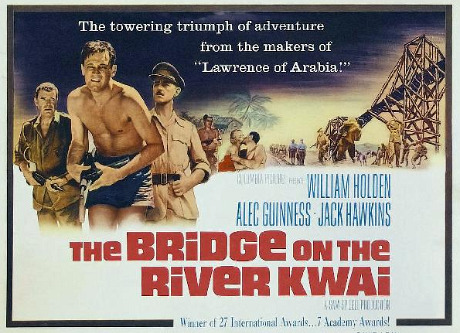 Jack Hildyard‘s widescreen cinematography is handsome for the most part — the early-morning-light shots are quite beautiful — but Kwai‘s visuals have never been what anyone (including Sony restorationist Grover Crisp) would call stunning or exquisite.

It wasn’t shot in 70mm and is not by any stretch a Lawrence of Arabia-type experience. It’s certainly not on the level of Jack Cardiff‘s work on Black Narcissus. It’s just a very nicely shot prisoner-of-war, trudging-through-the-jungle film with a beach interlude in which William Holden gets to sample the many splendors of a British nurse. On top of which the regular 2008 DVD looks fairly decent as is, especially if you watch it via a Bluray player on a large plasma flatscreen. So I’m not sure if the forthcoming Bluray, which streets on 11.2, can be regarded as much of a big deal.

From last weekend’s 25th edition of “The Reel Thing,” the annual technical symposium for the Association of Moving Image Archivists (AMIA): “Sony’s Grover Crisp, who organized the event with his colleague Michael Friend, presented the studio’s second 4K restoration, The Bridge on the River Kwai (1957), and noted the following:

(1) “Previous restorations included ‘defects’ caused by the production’s use of poorly-made opticals;” and…

(2) “A horizontal jitter in the original camera negative and subtle ghosting have now been corrected;”

(3) “The film’s original 2.55:1 aspect ratio has been resumed for the first time. (Crisp made everyone in the room cringe when he described how a previous editor had literally etched a scratch on each frame of the negative denoting what he or she felt was the ‘proper’ 2.35:1 framing.).”

Gothamist staffer John Del Signore has blown the lid off the bedbug situation at Manhattan’s AMC Empire. A woman who was “covered with bites” after recently seeing a film at the 42nd Street plex tells Del Signore that AMC Empire staffers” have confirmed that the theater has known of the infestation for days and that it will not be fumigated until Tuesday (i.e., today).

Staffers told the woman “that the AMC on 125th is fighting a bedbug infestation as well.”

Bedbugs, Del Signore notes, “thrive in the dark, and have previously feasted on moviegoers in Park Slope and Sheepshead Bay. Obviously, this is just another reason to go with Netflix, but doesn’t the movie theater have some obligation to warn customers that they’re being dinner and a movie?”

27 Comments
In Her Shoes

“With all of this talk about film restorations and recuts, I want to mention the restoration of Michael Powell‘s The Red Shoes on Blu-Ray,” says HE reader James Kent. “I’d only seen this film once before (a couple of years back on an HD cable station) and was struck by the legendary visuals and cinematography by Jack Cardiff. I knew the Criterion Bluray had to be special, but holy crap — it’s by far the most amazing pure-visual film I have ever seen. There isn’t a mark on this thing. It’s as if you’re in a screening room in 1948, and it’s being perfectly projected without a single scratch. It is restoration done right. It is probably a better visual picture than what was originally projected, but in this case — any upgrades are definitely an improvement. If you are a lover of film cinematography, Jeff. I encourage you to get it. Amazing.”

Todd Solondz is suddenly looking at some tough child-molester-movie competition from David Schwimmer. Especially with Schwimmer using first-rate actors — Clive Owen, Catherine Keener, Viola Davis, Jason Carke. Trust is playing the 2010 Toronto Film Festival, and if it’s well made, terrific. But the trailer makes it seem like an emotional-bait movie for saps, and something in me just rebels at this kind of thing.

The message titles on the trailer confirm it is exploitation of the lowest order, playing on the fears of people who long for absolute security, etc. Clive puts expensive locks on his doors, wants nothing more than to protect his family. But the child molesters will find and molest der kinder no matter what kind of locks anyone buys and how good a parent he/she is, the trailer says. There’s no way to protect them, and the cops (i.e., Clarke) won’t do the Harry Callahan thing. Five’ll get you ten Clive turns vigilante in Act Three.

A perfect moment happened three or four days ago inside Toad Hall, the neighborhood bar on Grand Street near West Broadway. I was buying my second beer (a draft of something golden and fairly icy) and all of a sudden this started playing. I knew the opening drum-and-raunchy guitar thing, but I’d forgotten the name of the song. The bartender reminded me. I returned to my table with the big brew and immediately bought the song on iTunes. It was on my phone two minutes later. 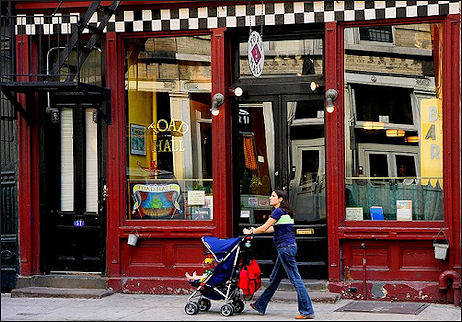 Sometimes when you hear the right older song in the right bar environment, life can suddenly seem delicious, tantalizing. You can’t help but smile. These moments always leave within seconds, of course, but they’re quite wonderful when they happen. They’re like little spirit butterflies flying into your head.

During an Avatar: Special Edition interview last week James Cameron told a Coming Soon guy that he’s “just done a complete remaster of Aliens (the Bluray of which will be included in the Alien Anthology set, due on 10.26), and that he did the work with the same colorist with whom he had worked on Avatar, and that he’s “completely removed all noise and grain from the extended version of the film.” Yes!

“It’s spectacular,” Cameron said. “We went in and completely de-noised it, de-grained it, up-rezzed [and] color-corrected every frame, and it looks amazing. It looks better that it looked in the theaters originally.

em>Aliens “was shot on a high-speed negative that was a new negative that didn’t pan out too well and got replaced the following year, so it’s pretty grainy. [But] we got rid of all the grain. It’s sharper and clearer and more beautiful than it’s ever looked. And we did that to the long version, to the ‘director’s cut’ or the extended play.”

Now I feel as if things are finally kicking in. Not that I wasn’t intrigued with the previously announced titles (including Darren Aronofsky‘s Black Swan, which I have above-average interest in and hopes for), but the Boyle and the Eastwood have upped the voltage. My only problem is with the curious absence of William Monaghan‘s London Boulevard.

Also freshly slated are John Sayles‘ Amigo, Benoit Jacquot‘s Deep in the Woods, Dan Rush‘s Everything Must Go (Will Ferrell as a drunk) and Matt Reeves‘ Let Me In.

Incidentally: I heard a while back from Ophelia Lovibond that William Monaghan ‘s London Boulevard (in which she costars as a character named “Penny”) would probably play Toronto, but it hasn’t been announced. What’s happened?

This is that clip from Blake Edwards‘ Experiment in Terror that I mentioned a few months ago, one that includes shots of a group of teenagers hanging out at a community pool. I saw this 1962 film for the first time in decades about a year ago, and when the poolside scene began I said to myself, “Something’s different about the kids apart from the haircuts and dialogue, but I don’t know what.”

And then it hit me. They’re all thin and in great shape. They look like they actually work out and watch their diets. Put any 2010 geek-body guy (Devin Faraci or Drew McWeeny, say) into a time machine and plop them into this scene and these 1962 kids would cock their heads to one side and wonder what kind of life forms have visited their world.

Hollywood tends to cast attractive stand-outs over run-of-the-mills so it can be assumed this aesthetic prevailed in casting Experiment in Terror extras, but the bodies in this scene are much leaner than anything you’ll see at Jones Beach or Ocean Park Beach in Santa Monica today. Fast-food bodies are completely the norm now — just ask the director of Food Inc., Robert Kenner. Fitness-wise the kids of 2010 don’t hold a candle to the class of ’62.

A couple of years ago I plugged Don’t Forget To Validate Your Parking, Mike Le‘s sharp and well-written webcomic. Yesterday Le released the first motion-animated sequence based on his work thus far. Excellent stuff. To borrow from Bukowski, the stink of Los Angeles has sunk into his bones.

Doonesbury vein,” I wrote in August ’08, “and that he knows from Hollywood suck-up psychology. And from bitterness, cynicism, hunger and desperate, under-educated phonies. I laughed out loud twice this morning, and I’m not a laugh-out-louder.

“Don’t Forget To Validate Your Parking is a webcomic written and illustrated by Mike Le, the American screenwriter and movie executive,” says the DFTVYP Wiki page. “Officially launched on December 11th, 2007 and published roughly once a week, the webcomic is loosely based on the author’s experiences working in Hollywood. Don’t Forget To Validate Your Parking’s initial popularity was limited to Hollywood insiders as it was passed around through internal work emails and private tracking boards”

“The only main character is a drawn version of the author sitting behind his laptop and on the phone. All supporting characters are expressed through dialogue, usually as a voice on the phone. The tone of the webcomic is comedic, satirical, bitter, ironic.”

From Johnnie To‘s Breaking News (’04), an action sequence that required repeated takes and took a long time to get right. A little digital cheating went into the final product, I gather, but nothing that looks overtly fake. Very nice all around. I love sustained shots of almost any kind.

Speaking as an early spotter of potential in Ed Zwick‘s Love and Other Drugs, this second trailer — spritzy, tearful, button-pushing — has made me turn around and say, “Whoa, chill down…enough.”

It’s the sad but apparently necessary task of all trailers these days to project a kind of dumbed-down essence of the movie they’re selling in order to attract the Jersey Shore crowd. This trailer does that, fine, mission accomplished …now ease up. Because the comments I’ve been reading suggest it’s more than just another effin’ rom-com.

Next month Fox needs to release a trailer that’s a little calmer, less “funny,” more natural-seeming. If LAOD has the real goods, don’t trivialize it by appealing only to the ADD Whitney Matheson crowd. The mentality that Matheson appeals to is the lowest form of intellectual and spiritual life there is….God!