In the view of Movieline‘s Stu Van Airsdale, the Best Actress contenders with the most heat at this stage are The Iron Lady‘s Meryl Streep (based on nothing), My Week With Marilyn‘s Michelle Williams (good buzz on her performance last weekend at the NY Film Festival), The Help‘s Viola Davis (whose so-to-speak candidacy drew a “meh” response from a name-brand director last weekend), Albert Nobbs‘ Glenn Close (career referendum), and We Need to Talk About Kevin‘s Tilda Swinton. 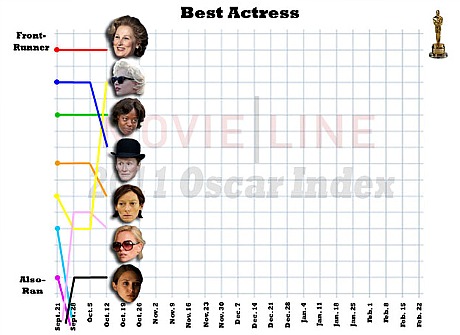 Van Airsdale naturally ignores Tyrannosaur‘s Olivia Colman, even as a totally hopeless outsider type. But of course! Let me tell you something right now. The idea that Van Airsdale considers the performances by Olsen, Jones, Dunst and Stone to be worthy of solid outsider status while declining to even mention Colman is absolutely sickening. Occupy Movieline!

What aside from the cutting and the choice of clips is different from the previous whatever-it-is-that-I’ve-seen-on-YouTube? The jaunty narration.

“The Occupy Wall Street crowd basically is saying, ‘I’m unemployed and the people that caused this have their jobs again and their bonuses again and their incomes are high again. There’s something wrong with this country. This is not working for me.’ So I think it can be a good positive debate.” — Former President Bill Clinton, whose “let the big boys have their fun” policies contributed to the current economic malaise, speaking Tuesday night at Chicago’s Chase Auditorium.

The Weinstein Co.’s My Week With Marilyn has delayed its opening by almost three weeks, ditching 11.4 in favor of 11.23. The idea is to play right through December and into January — the heat of awards season. Deadline‘s Mike Fleming says the change was inspired by positive critical reaction after the New York Film Festival debut. “If you live on the Upper West Side and only take cabs, you’ll love it“?

I don’t what to say or where to start, but I can say one thing in summation. It wasn’t that good or satisfying, but at the same time I didn’t feel badly burned.

“I think it’s basically a very intriguing, misshapen mess,” I told a colleague some time ago. “Not enough of a story, some odd coverage, and not long or complex enough to be a Zodiac-styled cold case movie, which I would have been down for. The tone lacks a commanding vision, a consistent aesthetic. It feels raggedy, and yet an intriguing kind of raggedy. It was obviously made by talented people looking do something extra…and not quite getting there.

“All the performances have something or other. All the leads are watchable and interesting. It’s atmospheric and creepy but…HELLO? It doesn’t go anywhere. And it leave you hanging besides, especially regarding a character who seems to be the most malevolent bad guy (Clarke, last in Public Enemies). He just shoots [a character I won’t name] and then disappears….what?

As it happened I met and spoke with Clarke at a party last weekend, and he said that the TKFshoot ran out of time and/or money, at least to the extent that certain pages weren’t shot. Clarke is now working on Baz Luhrman‘s 3D The Great Gatsby. He’s playing George Wilson, the working-class character who plugs Jay Gatsby in the back at the very end. Scott Wilson played him in the 1974 version.

There’s a moment in Moneyball when Brad Pitt asks Jonah Hill, “Would you rather get shot in the head, or take five shots to the chest and bleed to death?” Pitt was talking about the best way to fire a baseball player, but the metaphor also applies to the killing of a movie. Particularly in the matter of Paddy Considine‘s heavily praised Tyrannosaur, and the fact that Strand Releasing has done a brilliant job of nickle-and-diming it to death before the 11.18 opening. Especially in the case of Olivia Colman‘s stunningly fine performance as an abused housewife.

I don’t believe, of course, that Strand’s Marcus Hu wants to kill Tyrannosaur or diminish awards talk about Colman (who could qualify as either a Best Actress or Best Supporting Actress contender, as she doesn’t strictly have a lead role in the film), and I know how tough it is these days for indie-market distributors. As one publicist puts it, “Marcus has managed to survive the last 25 years when a lot of people have gone out of business.”

But I heard this morning from a Strand press rep about current plans to launch Tyrannosaur, and they boil down to doing it all on the cheapy-cheap-cheap. No U.S. face-time interviews for Colman (she’ll be staying in England to do phoners while her husband is going to try and social network on her behalf), and zero screenings set for LA critics as we speak (although one or two will probably be set up fairly soon). Strand will send out screeners to AMPAS members in the acting and directing branches, as well as to NY, LA, SF and National and HFPA members. (But not BFCA, or at least not yet.)

“Sadly in this economy and landscape, releasing films like Tyrannosaur is really hard and a risk,” Hu explains. “Tyrannosaur is a great movie, but neither the Weinsteins nor any other distributors lined up to make an offer, nor was there a bidding war. Apparently, they did not see the commercial potential.

“While we are doing the most we can afford to do for an Academy push, the kinds of money that the Weinstein/Focus/Sony Classics can throw around, is not the business model we’re in. One misstep financially could put us out of business, and frankly, many independent distributors have gone out of business with misspending.

“Films like Tyrannosaur often slip through the cracks, so we appreciate your energy and and we are thrilled to be releasing it, as modest as our release may be.”

This doesn’t change the fact that Colman’s performance is Tyrannosaur‘s strongest hand, and by keeping her in England Strand is basically throwing in the towel. They’re essentially taking out a trade ad that says, “We love Tyrannosaur and we know Olivia Colman gives a genius performance in it, but we can’t afford to promote her. We know she understands, and we hope that you do too.”

If you care about any kind of justice prevailing in the awards-giving world, this is a significant tragedy. Ask anyone who’s seen this film. Ask In Contention‘s Guy Lodge, who posted his review yesterday.

I’ve been praising this film for months until blue in the face, but I’m no match for Strand‘s anemic attitude. Here’s how I put it to Strand’s press rep this morning:

“So in other words, Olivia Colman isn’t going to fly over and do interviews in NY or LA or make any real attempt to ‘work the room’? She’s staying in London for phoners, and her husband — I can’t believe you actually mentioned this — is going to try and tweet her into the conversation? Because the decision to do this means she’s out of the game. She’s not even going to try. And that’s a crying shame, given how amazing she is in Tyrannosaur.

“If you’re in the process of arranging phoners for Olivia, why have you not offered me, ‘one of Tyrannosaur‘s biggest champions,’ the opportunity to speak with her?

“The film is opening on 11.18, and so far there are two screenings set for NYC and no screenings set for LA….yet. The movie is opening five weeks from now, and outside of those who attended Sundance ’11 or at the LAFF or the Chicago Film Festival no one has seen it. I’ve been browbeating people about this film for months, and the big L.A. guns still haven’t seen it. Not Anne Thompson, not Sasha Stone, not Kris Tapley, not Pete Hammond, etc. This is a joke!

“If I was Olivia Colman, I would take out a bank loan for $50,000 and really go to town and come over here and make the rounds. Life is short and if you’ve done great work you have to take your shot. But then to do that you’d need a distributor who really believes in you and who has a bit of the old Harvey Weinstein thunder, and that distributor is obviously not Marcus Hu, who is too cheap to have scheduled any press screenings in LA thus far. What a tightwad!

“Between (a) the zero LA screenings thus far despite the opening five weeks off and (b) no Olivia Colman visit to the States and (c) no invite to speak with her on the phone, I’m just about ready to give up. The prospect of Colman landing a Best Actress or Best Supporting Actress nomination in a totally lost cause, and for two very simple reasons. One, the movie is probably too downbeatish — too much of a bath in British miserablism — for most Academy members to handle. And two, whatever chance Colman might have is being torpedoed by the meek and mousy instincts of Strand and the general lack of gambling spirit.”

What kind of low-rent blonde has it off twice with a famous Hollywood actor and then gives an interview to Us Magazine about it? I’ll tell you what kind. The bumblefuck declasse kind from Texas who calls herself a Lutheran. The kind that mentions Rick Perry in a discussion about presidential candidates and says she doesn’t know if she’ll vote for him.

Whatever happened to the idea that it’s a low-rent thing to kiss and tell? The under-30s have no shame. Let it be known far and wide that Sara Leal and anyone resembling her is profoundly lacking in class and especially character. What a nightmare it must be to be so hungry if not desperate for the slightest glint of blink-and-it’s-over fame that you’d advertise yourself nationwide as a shallow opportunistic mouse who’s probably never read a book or had much of an education and probably doesn’t know who Glenn Kenny is.

Forget Univeral’s plan to offer Tower Heist to VOD customers in Atlanta and Portland on 11.25, or three weeks after its theatrical release date of 11.4.11. Too many exhibitors howled and threatened Armageddon and Universal caved under duress.

From a rough draft of the release: “Universal Pictures today announced that in response to theatere-owners turning purple-faced with fury and completely freaking out and spitting saliva and throwing tantrums and slamming their fists through the plaster walls and threatening to go to the mattresses Luca Brasi and Clemenza-style a request from theatre owners it has decided to delay its planned premium home video on demand (PVOD) experiment.

“Universal continues to believe that the theater experience and a PVOD window are business models that can coincide and thrive and we look forward to working with our partners in exhibition to find a way to experiment in this area in the future.

In response a rough draft from the National Association Of Theater Owners and its CEO John Fithian allegedly says the following: “NATO would like to thank Universal for responding to various theater owners’ concerns and cancelling the PVOD test it was contemplating. They have been engaged with individual exhibitors on this test blah blah, and while it was something that many theater owners could not ultimately support blah blah, the open and collaborative nature of the dialogue is appreciated blah blah screw these bastards. NATO recognizes that those miserable prick studio fucks need to find new models and opportunities in the home market, and looks forward to distributors and exhibitors working together for their mutual benefit.”