On Tuesday, 6.4, a Bluray of a director’s cut of Peter Bogdanovich‘s At Long Last Love (’75) will be released. From the Wiki page: “The film opened in March 1975 to scathing reviews and poor box office returns, prompting Bogdanovich to have an open letter of apology printed in newspapers throughout the U.S. Bogdanovich has since stated he regretted that ALLL was hastily cut prior to theatrical release based on reactions to studio previews. 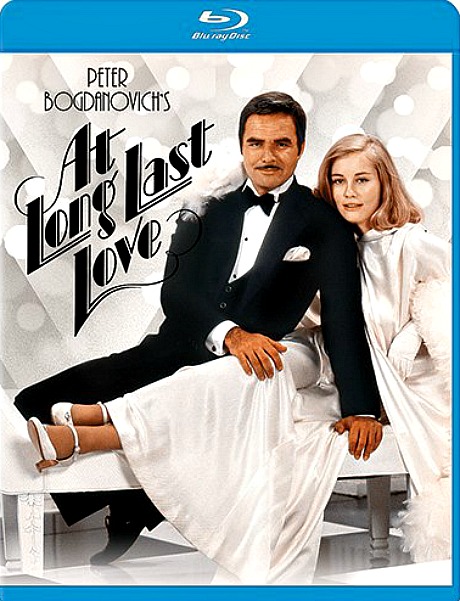 “PB subsequently recut the film himself for cable TV, and has stated many people who first saw it in this version did not react so badly [as others did] to the [theatrically released version].

“It came to light in 2012 that a studio employee had secretly kept a more complete version of the film in the vaults for many years, and when Netflix decided to make it available to stream, this is the version that was shown. This version came to the director’s attention as a result of Netflix streaming and running on Fox Movie Channel, and, with Bogdanovich’s cooperation, [it was] decided to release At Long Last Love (with some added refinements from the director) on disc in 2013.” 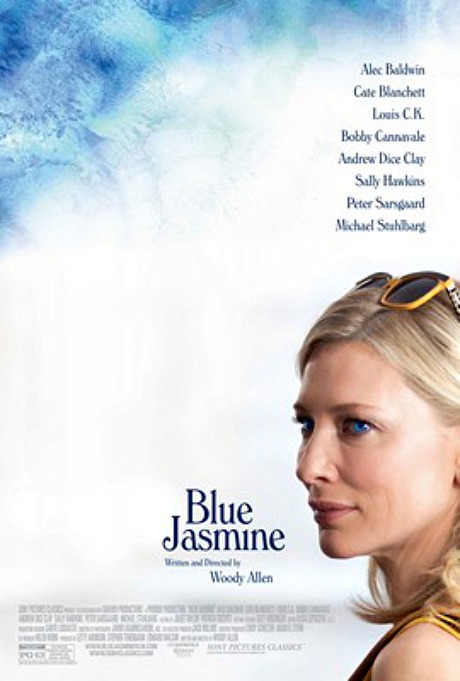 It’s fitting that this review appears on rogerebert.com. Remember (and I don’t mean any disrespect) that every now and then Roger could be very friendly to films that most of the movie-reviewing community hated. The tradition of the smart, insightful reviewer with a kind or compassionate streak didn’t begin with F.X. Feeney, but he’s probably the most respected practitioner of this kind of thing. Now he has an ally in Matt Zoller Seitz. Nothing wrong with that. 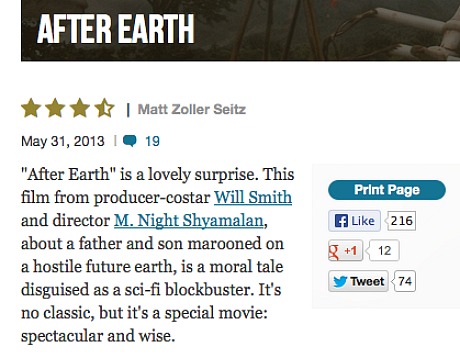 The best review-compilation books contain riffs and thoughts that take you back to when this or that film was fresh out of the bakery. Review after review, film after film, they make you want to go there again. Tell me these portions of Peter Rainer‘s review of Being John Malkovich, cribbed from the currently-on-sale Rainer on Film (URL: http://www.hollywood-elsewhere.com/2013/05/mr-cranky-with-class-insight-feeling/), don’t nudge you in this direction. Ditto a subsequent riff from Rainer’s review of Fight Club. 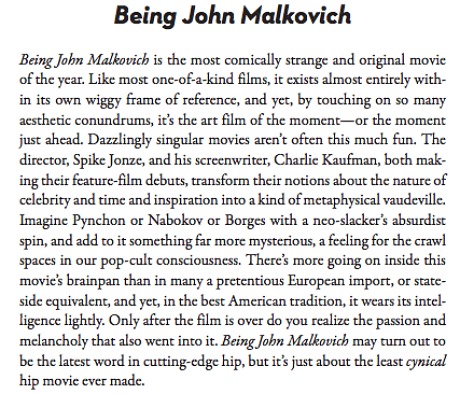 Shawn Levy‘s The Internship, the much-derided Vince Vaughn-Owen Wilson comedy about 40ish Google interns, is sneaking tonight nationwide at 7 pm. Will those HE readers without a confirmed hate agenda please attend and report back after the screening? Thank you. I’ll run whatever comes in, of course, but a voice has been telling me all along that this film half-works, at the very least. And maybe better than that. The online derision has been based on next to nothing. Fox wouldn’t be sneaking it if they didn’t know for sure that it plays well.

I’m bringing nothing original to the table from Switzerland but let’s review the basics. After Earth‘s Rotten Tomatoes verdict is the pits — it’s the new Battlefield Earth. And so far the public appears underwhelmed with the M. Night Shyamalan-directed sci-fi adventure expected to reach the mid $20s by Sunday night, which Deadline‘s Nikki Finke is calling a shortfall given expectations of a mid 30s-to-low 40s haul. So basically it’s a tank and a major embarassment and very possibly the end of (or certainly a roadblock to) Jaden Smith‘s big-screen career.

I don’t think ticket-buyers are hip or curious enough to smell the Scientology metaphor, which Vulture‘s Matt Patches has recently pointed out (“After Earth Is Will Smith’s Love Letter to Scientology” — URL: http://www.vulture.com/2013/05/after-earth-will-smith-love-letter-to-scientology.html). I think the rejection of After Earth is more fundamental than that. Audiences resented the idea of shelling out to see an unproven and not-all-that-charismatic or even talented teenage kid just because he’s Will Smith‘s sire.

9 Comments
Asses Handed To Them

So that’s an unfortunate fail for the Hotel Schuetzen Lauterbrunnen (URL: http://www.hotelschuetzen.com/en/) because of their totally shitty, verging-on-nonexistent wifi. They’re fine, I’m fine, it’s nobody fault and I’m checking my ass out this morning and heading back to Berne for the night. All I know is that a cafe right next door to the Hotel Schuetzen Lauterbrunnen has absolutely drop-dead, world-class, lightning-fast wifi. They get it and Schutzenites don’t. 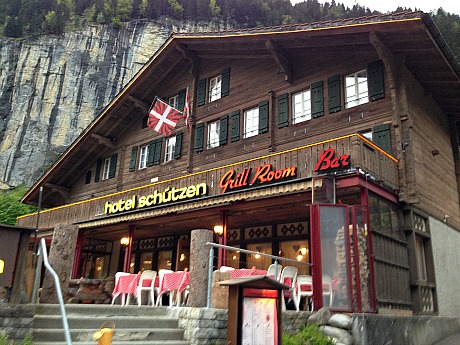 Most of the good people who stay in this place are retirees who wear sandals with brown socks. These people are not part of the dynamic 2013 world and are therefore content to reside in a a wifi black hole. Fine for them — not so good for a fellow like myself. No biggie. I just don’t have time for this crap. And Berne is a very spirited town.

If I came back as a cow, I’d want to live in Lauterbrunnen. A friend said yesterday that the sight of cows gloomed her out because they all end up being slaughtered. To which I replied, “Wait…cows get slaughtered?” Then I thought about it. The basic principle of any farm is to never let anything go to waste so I guess when cows reach retirement age it’s off to the House of Death. I’m fairly certain that farmers don’t just let them get sick and drop dead on the pasture. So in a way the story of every cow is mirrored in Shohei Imamura‘s The Ballad of Narayama. 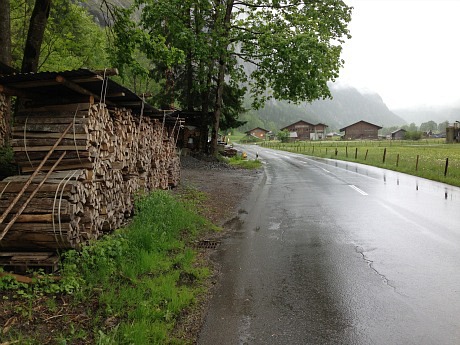 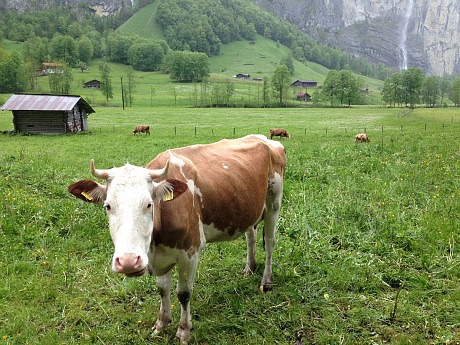