There’s another wackjob in the building besides the gay guy upstairs who loudly cackles each and every morning around 7 or 7:15 am. The new guy (who’s actually been here several months) is a young Charles Manson beardo who’s twice asked me if Mouse is my cat. What kind of a saliva-dribbling, pajama-wearing public enemy do you have to be to notice a neighbor calling and clapping for his cat and then say as the cat runs up, “Is that your cat?” Last night around 10:30 pm I opened the door and Manson was standing two feet from the doormat, rock-still like a mental patient on thorazine. I looked at him and told myself not to worry (lots of people stand two feet in front of my door!), and again I called out “Mouse!” and right away he appeared and ran indoors, and this guy said as Mouse ran by, “Is that your cat?” I looked at this twisted fuck and said, “No, he’s a stray. I just call him Mouse because he reminds me of a cat I had who was kidnapped by some guy who looked like Charles Manson. Is he your cat? Do you want to pet him or something? What meds are you on? If they let you out on weekends, don’t you have to be back by Sunday nights at 9 pm?” 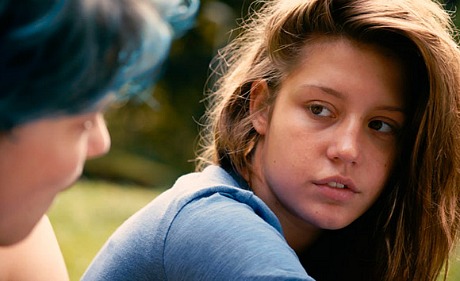 I obviously dip into non-film topics in this space from time to time, but I draw the line at relationship stuff. I’ll allude every so often to something going really well but leave it at that. Boundaries are respected, no telling tales, stays in the box. But I’m also figuring there’s nothing terribly gauche about acknowledging that it’s exhausting to go through a two-hour texting meltdown when things have taken a turn for the worse.

I wonder if anyone hashes this stuff out eyeball-to-eyeball any more. Thank God that iMessage allows you to text from a computer keyboard — I don’t think I could thumb my way through one of these ordeals. Texting your innermost disappointments and lamentations while keeping up your end of the “debate” (which can never be won or lost, of course) is quite debilitating. When you wake up the next morning you feel empty and a bit numb. Is “gutted” too strong a word?

4 Comments
Beauty In A Shoebox

There’s no question that Paolo Sorrentino‘s The Great Beauty (Janus, 11.15) is a mesmerizing film. Dazzling, swirly, lacquered and narrated to a fare-thee-well — a resigned and somewhat rueful examination of a 21st Century La Dolce Vita lifestyle of a journalist-novelist (the great Toni Servillo) who’s letting it all slip away. It finally feels more Roman that universal, but the diversions are quite formidable. It’s very beautiful, meditative…a big ambitious reach. I said as much last May in Cannes. But what a comedown to have seen it on the big Lumiere screen inside the Grand Palais, and know that it’s set to play on one of those cramped shoebox spaces at the Lincoln Plaza. Something unjust about that.

The legendary Lou Reed, the unaffected king of solid, straightforward, basic-style rock ‘n’ roll poetry — that deep, bullshit-free voice plus bare-boned New York street lyrics with a good old twangy guitar, bass and drums — and one of the most important rock music influencers of all time….Lou Reed is dead? He was only 71, for Chrissake…oh, I see…”complications due to a liver transplant”…uh-huh…a rock ‘n’ roll pay-the-piper death. But what matters at the end of the road is quality, not quantity…right? Reed’s contributions to the Velvet Underground banana album plus Transformer alone were enough to cement his reputation as a seminal ’60s and ’70s legend. Being something of a middle-of-the-roader (musically, I mean) I was no fan of Metal Machine Music or The Bells or even Berlin for that matter, but Reed was “the guy” to me…the Real McCoy of flinty, tough-as-nails, occasionally flamboyant but at the same time plain-as-can-be rock ‘n’ roll authority. I turned to his cuts over and over and over. “I Love You Suzanne” is one of the great lightweight rock anthems of all time. The kids and I used to sing along to New York (particularly “Dirty Boulevard”) and Magic and Loss in the ’90s. But quantity counted also as Reed stuck to it for a much longer and arguably more impassioned period than Elvis Presley (whose peak influence period lasted from ’55 to ’58) or the Beatles (’63 to ’70) — he kept writing and composing and strumming away for 45 years, and mattered a great deal for at least 30 if not 35 of those. He went away from time to time but never retired, never recycled…well, he “recycled” but he never stopped looking for the next thing. I love that he didn’t smile very much. I can imitate Reed singing “Venus in Furs” really well.

I’ve long advocated the idea of parents taking their tweener kids to films that portray real history and stark present-day realities. Once in a blue moon a Hollywood film portrays violence as the truly horrid thing it is — I would take my ten year-old to that film in a New York minute. 20 years ago I wrote a piece for a parenting magazine that urged parents to take their younger kids to Schindler’s List. If it upsets their tender sensibilities to see what it was like to suffer and die in a Nazi concentration camp, good — maybe it’ll teach them something. I would also take my ten-year-old to see 12 Years A Slave, no hesitation. I would tell him or her “put your shoes on…you’re seeing this movie.”

I suspect that most parents don’t see it this way. My two sons are grown, but having been in the trenches in the ’90s and early aughts my impression is that most parents want to protect their kids from the harsh realities of life and raise them inside a kind of ultra-sensitive alpha bubble. One reflection of this is the way Screen It, a movie-screening website for parents, is noncommittal about 12 Years A Slave. It doesn’t ask if kids should see it because of the moral lessons it contains, or whether they should be taken to see it by their parents. It asks if kids will “want” to see it, and it answers as follows: “If they’re interested in the subject matter and/or are fans of anyone in the cast, they might. Otherwise, it doesn’t seem too likely.” That’s it?

Last night’s SNL Wes Anderson spoof [previous post] reminded me that it’s been almost exactly 20 years since I tapped out the very first Wes Anderson-and-Owen Wilson interview, which came out of a phoner that happened a while before this 11.7 L.A. Times Calendar piece was seen. The wheels of newspaper journalism turned fairly slowly back then. It could take as long as two or three weeks for a 750-word article to happen — initial pitch, library research, interviewing, writing the piece, editing, an occasional re-write and re-edit and finally the physical publishing. And then you’d buy a few copies and cut out the article with scissors, and then make copies at Kinkos. The process is a teeny bit faster these days. 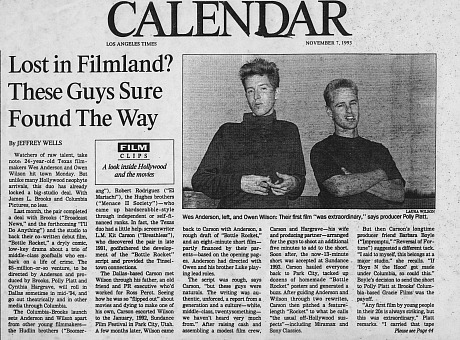 Richard Gere is obviously trying to get Andy Garcia‘s goat, but his analysis about how busy yuppie couples sometimes lose the spontaneous sensual element is spot-on. I was married when Internal Affairs came out in ’90. The recently released Bluray, which I bought this evening, sounds good but doesn’t look that exceptional. Better than a decently mastered DVD, but not that much better.

25 Comments
“You Know How The Game Works”

It’s obvious that Robert Redford‘s role in this possibly tolerable Marvel film allows him to play it straight and modest and sensible and so on. He isn’t wearing spandex or a helmet or throwing lightning bolts out of his fingers. So all indications are that Captain America: Winter Solder is in no way, shape or form “Redford’s Norbit.” In a Best-Actor-race context, I mean.

I honestly feel that a reality series about Hollywood’s award-season blogger crowd — Awards Daily‘s Sasha Stone (the feminist-compassionate earth mama), Hollywood Reporter columnist/analyst Scott Feinberg (the tough-talking whippersnapper), Gold Derby‘s Tom O’Neil (the shoot-from-the-hip statistician), MCN’s David Poland (the chuckling, lecturing, eyebrow-raising know-it-all), Deadline‘s Pete Hammond (the tireless tapdancing political gadfly who files at 2 am), Indiewire‘s Anne Thompson (the seasoned, lightly-treading diplomat), Hitfix‘s Kris Tapley (the solemn and judgmental young guy who wants to bail on this racket in order to write screenplays), Vulture‘s Kyle Buchanan (the soft-spoken droll guy) and myself (the Last Honest Cowboy Hat — the most poetically-inclined, confessional-minded and intuitive, non-alcoholic poet-samurai truth-teller of them all) — would make for excellent viewing. I would watch it in a heartbeat. Seriously — are you going to tell me that other reality series (i.e., Fucked-Up, Soul-Poisoned Housewives of Suburban New Jersey) would be even half as interesting as a bunch of clever, eager-beaver neurotics (okay, semi-neurotics) hustling around Hollywood in their alligator shoes? The difference is that it would be entirely composed of edits from Google Glass captures. Everyone would have to wear these glasses 18/7. No video crews following everyone around…that’s old hat.