In response to yesterday’s embarassing story about Kate Mulgrew having narrated a rightwing doc about geocentrism, the 58 year-old actress is admitting she never did a Google search before taking the gig.

This is going to sound staid and unhip but when I’m driving late at night and looking to downshift, I sometimes listen to this. A nocturnal thing. It doesn’t work during daylight. I don’t care how unhip this sounds.

I wish I’d had the cojones to talk like Jonah to the Hispanic Party Elephant from North Bergen (i.e., between five and six years ago). That might be my problem in life. I talk a tough game but when it’s live and not Memorex, I often candy-ass out. Maybe that’s just being smart.

Like Gravity and All Is Lost, Steven Knight‘s Locke (A24, 4.25) is a gripping survival story about an isolated protagonist (in this instance an industrial construction foreman played by Tom Hardy) grappling with a series of intense, life-threatening challenges…tough terms, face up to them, do or die. But Locke is a much more engrossing drama than Gravity and the exact verbal opposite of the all-but-silent Lost. We’re only three months into 2014 but Locke is easily one of the best films I’ve seen thus far, and I’m including Captain America: The Winter Soldier and those eight Sundance films that I admired.

The 85-minute running time happens entirely inside a BMW SUV on the motorway between Birmingham and London, and it’s all about bluetooth phone calls. Hardy is behind the wheel the entire time. But what pushes the film along is the stuff of any compelling drama — character, tough decisions, adult pressures, guilt, tragedy, trauma and suspenseful twists and turns.

On 4.7 Deadline‘s Dominic Patten reported that the third season of HBO’s Veep kicked off Sunday night with 955,000 viewers, which was “down 20% from the 1.2 million who tuned in to the show’s Season 2 debut on April 14th last year.” Sunday night’s Veep performance also “dipped 3% from the 985,000 viewers who tuned in for the series’ Season 2 finale on June 23.” I’m presuming this Rolling Stone cover was decided upon in response to (or in anticipation of) the lower numbers. 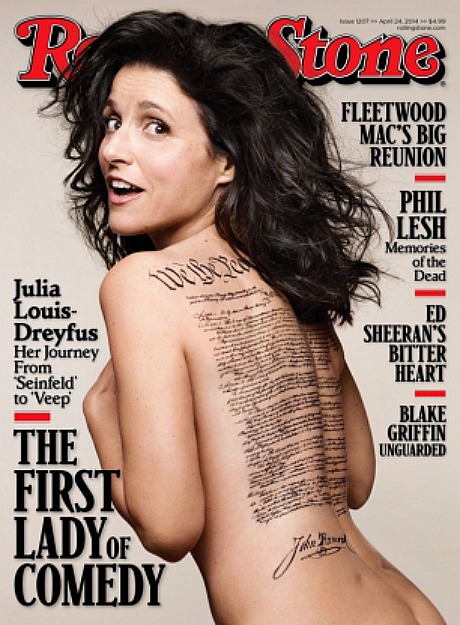 I agreed to a review-embargo on Neighbors (Universal, 5.9), but I can at least say two things about this not-bad, moderately effective comedy, which is about a pitched battle between a 30ish married couple (Seth Rogen, Rose Byrne) and their party-hound fratboy neighbors (Zac Efron, David Franco, Christophe Mintz-Plasse). One, it brought back that conflict I had with the now-legendary Hispanic Party Elephant, the guy who lived upstairs from my place in North Bergen in ’08 and ’09 — one of the most loathsome life forms I’ve ever had the misfortune to run into. Two, Rogen is not the kind of guy you want to see with his shirt off, much less his pants off and definitely not exposing rolls of milky-hairy belly fat in a sex scene. Lose some weight, trim the yak hair and and apply tanning lotion (just like Burt Lancaster did while shooting The Swimmer) before committing to a sex scene or just keep it covered, bro…give us a break here.

7 Comments
Foundas Gets It

Last night Variety‘s Scott Foundas more or less agreed with my opinion that Mickey Rooney‘s most interesting performances might have happened after his slap-happy, top-of-the-world, movie-star peak of the 1930s and early ’40s. His noir films weren’t as “entertaining” as the fluff stuff but they have a dimensionality lacking in the Andy Hardy films (it was Lana Turner who gave Rooney the nickname “Andy Hard-on“) and Judy Garland musicals. Foundas focused on three crime noirs — Quicksand, Drive A Crooked Road and Baby Face Nelson — in which Rooney starred, but what about his ferocious turn as Killer Mears in The Last Mile (’59)? Not an especially good film, but the finale — Rooney coolly sauntering into a prison courtyard to face a hailstorm of bullets — is classic. Honest reaction: Very little of Rooney’s “What I’ve Learned” Esquire interview (2006) “sings” or sticks to the ribs. 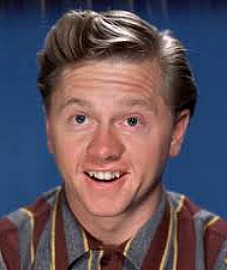 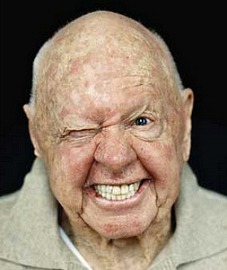 My first movie-related reviews and articles began to be published in the spring of ’78, or just after I’d moved into my very first roach-infested Manhattan apartment. (143 Sullivan Street, just south of Houston.) But the very first time I got any ink for anything at all was in June of 1977, when N.Y. Times stringer Jennifer Mackby wrote a piece about a Save The Whales concert that I was co-producing with then-girlfriend Sophie Black (currently a renowned poet). The Woodstock-like concert was held on a hilly 52-acre farm owned by Sophie’s parents (’60s and ’70s Broadway producer David Black and Opera New England and Opera Company of Boston co-founder Linda Cabot Black). I was working hard and living a robust life as far as it went, but the leafy vibe and social languor of Fairfield County almost acted as a kind of sedative (or so it seems to me now). A rude Manhattan awakening would follow within a year. I would eventually come to know the meaning of the line “to live in this town, you must be tough tough tough tough tough tough tuhhff,” and there would be loads of anxiety and very little peace until I finally edged my way into the NY film journalist fraternity in ’79, and even then life was brutal. 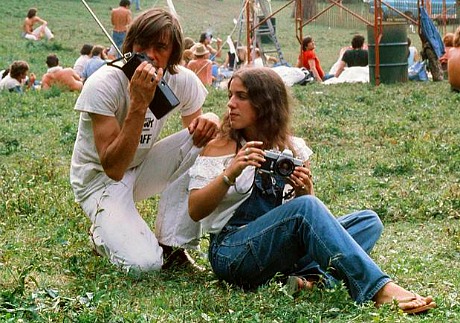 Myself and then-girlfriend Sophie Black during 1976 open-air Save The Whales concert, held around Labor Day, on her parents 52-acre farm in Wilton, Connecticut. We co-produced this and a July 4th, 1977 concert in the exact same vein. 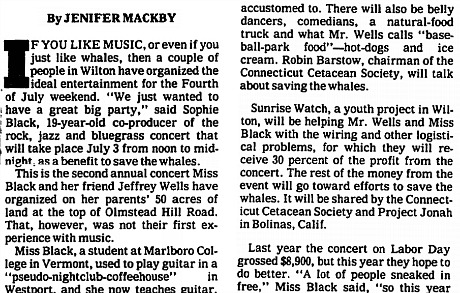 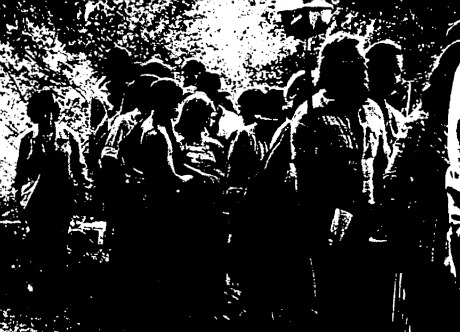