Without providing the root link, Awards Daily has posted the Ten Best Films of 2014 list by Time critic Richard Corliss. Wes Anderson‘s The Grand Budapest Hotel is a ballsy #1 and Alejandro G. Inarritu‘s Birdman is #10. Boyhood is #2 (fine), followed by The LEGO Movie at #3, Goodbye to Language at #5, Jodorowsky’s Dune at #6, Citizenfour at #8 (approved) and Wild Tales at #9 (ditto). But Corliss calling Luc Besson‘s Lucy his #4 film of the year is a problem. There’s no right or wrong way to look at any film, of course, except in the case of a soul-less, faux-Asian piece of CG-driven jizz whizz like Lucy.

An uptown know-it-all from way back, Corliss chose to single out Lucy, I suspect, in order to to demonstrate that he can be as louche and loosey-goosey as the next guy. A simple way to do that is to embrace a crappy film or two. A line in “The Film Snob’s Dictionary” states that the film snob can sometimes be “willfully perverse in his taste.” Check.

Yesterday at a Los Angeles press conference attorney Gloria Allred suggested that the accused serial rapist Bill Cosby might want to think about waiving the statute of limitations for the decades-old allegations that have been thrown at him over the last couple of weeeks so that “in a court of law the victims and Mr. Cosby would have an opportunity to have a judge and jury decide who should be believed.”

Failing that, Allred said, Cosby could donate $100 million to fund settlements for the alleged victims.

A $100 million payoff will never happen, of course, but Allred is at least offering Cosby a way out of the woods. Peace and serenity are not attainable, but if he wants a semblance of closure during his final decade or two of life, he’ll need to cough up 25% of his $400 million fortune. Pay these women off and the cloud will start to dissipate, she’s saying. You won’t be admitting anything but the everyone will understand. Do this and the court of public opinion might ease up and you can go to restaurants and tennis matches without people giving you death-ray looks.

“And what’s with Michael Keaton‘s non-stop running around with white Fruit of the Loom underwear, at least as far as this trailer is concerned? In my eyes Fruit of the Loom is pretty close to gold-toe socks in terms of aesthetic offense. The world of men’s underwear is pretty cool these days. I personally lean toward slim boxer underwear with a button-snap fly. Nobody with a shred of taste or self-respect wears Fruit of the Loom briefs, least of all anyone allowing for the possibility that they might wear them in public.” — from a 7.31.14 HE riff on a Birdman trailer.

“When it came to shooting a scene in which Keaton must walk (or rather, run) through Times Square in his underwear, costume designer Albert Wolsky put his foot down. ‘Michael would have preferred boxer shorts, but I felt very strongly that they had to be old-fashioned jockey shorts or BVDs,’ he said. ‘Otherwise he’s not vulnerable enough.'” — from 12.2 N.Y. Times “Carpetbagger” posting by Rachel Lee Harris.

13 Comments
After The Fall

I don’t want to oversimplify but for the most part men and women who’ve been around the block tend to feel differently about ex-lovers. Once a relationship has come to an end and two or three months have passed, most guys will look back and say, “Well, that happened!” I for one feel it’s a good policy to be friends with exes if at all possible. No point in holding grudges. I got dumped a year ago and what of it? Let it go, move on. And yet many women, I’ve noticed, will say “oh, my God, what was I thinking?….why did I see in that fucking psycho? I’m thinking of moving to another city to increase the distance between us…maybe I need to post a notice on Facebook to spare other women the same nightmare…well, at least I’ve learned my lesson.” But if you had met this woman while she was still going out with the ex-boyfriend, she would be all mellow and smooth and comme ci comme ca with the guy. Everything would be cool or no biggie. To most…okay, to many women past relationships that didn’t work out are a blot on their souls…a huge mistake. They seethe about them for years, decades.

On 10.4 I riffed about Kathryn Bigelow‘s Last Days, an animated short doc about elephant poaching, which had previously been given a special screening during the New York Film Festival. I asked why isn’t Bigelow’s film hadn’t been made available right away by the Wild Aid guys…nothing. Now, two months later, they’ve finally released it. An elephant is killed every 15 minutes. Wild elephants may be all but extinct in 11 years. “Blame China,” you might say, but one of the biggest markets for ivory is right in New York City. Here’s the home page, so to speak.

I’m a little ashamed to admit this, but until last night I had never seen Joseph H. Lewis and Dalton Trumbo‘s Gun Crazy (’50). I was flipping through films on my new Roku player and came upon a high-def version on Warner Classics. I’d been told for decades that Gun Crazy was an essential noir that everyone loves, but I wasn’t expecting to be blown away. I was half-asleep when I started watching at 11:30 pm but I woke right up. It’s genius-level — a major groundbreaker, pulp art. Those long takes shot from the rear of John Dall and Peggy Cummins‘ moving car (particularly that legendary three-minute-long bank robbery sequence), the urgent sense of immediacy, that semi-improvised-sounding dialogue, those urgent close-ups, conflicted emotions, the sexuality, the fog-shrouded ending in the swamp…all of it. I hereby apologize to Lewis, Trumbo, Dall, Cummins and the whole team for missing this classic for so long.

“This is Noah Baumbach’s snappiest and most commercially appealing film yet. Not as darkly hilarious as Greenberg or as visually ravishing and mood-trippy as Frances Ha, but it’ll be well reviewed and catch on with most under-50 urban sophistos. It’s a nimble, fast-moving, culturally attuned relationship dramedy about a generational chasm (late 20somethings vs. 40somethings) or more precisely the vague sense of anxiety that somewhat older guys have about younger guys in their field or realm — a fear of being out-hustled or out-cultured and possibly even left behind if they’re not careful.” — from my Toronto Film Festival review of While We’re Young.

Pretty much all James Bond villains over the last 52 years have been perverse European elitists with the usual compulsions and gourmet savorings. Joseph Wiseman‘s Dr. No was “Chinese,” of course, and Yaphet Kotto‘s Dr. Kanaga/Mr. Big in Live and Let Die was Caribbean-born, but they were cut from the same cultivated cloth. So now we have Christoph Waltz, Hollywood’s definitive, all-purpose, highly mannered 21st Century villain, playing yet another classic Bond baddie — the Ernst Stavro Blofeld-like Oberhauser — in the just-announced Spectre. Again. When the real malignant baddies of 2014 are the Islamic nutters. Plus 1% jackals looking to exploit the misery of others caught up in shrinking or stagnant economies, corporations involved in same, fossil-fuel burners, etc. 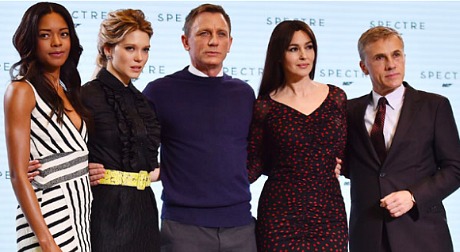 The Bond films have never been about realism but they’ve always inserted political and cultural ingredients so that the 007 realm will bear at least some resemblance to the real world. Going with a standard, super-slinky, European-born baddie is lunacy in this day and age.

On top of which I’m sick to death of Waltz playing another unctuous villain who delights in his sinister silkiness. Something in me just snapped when he picked up his second Best Supporting Actor Oscar for Quentin Tarantino‘s Django Unchained, after winning the same trophy for more or less the same kind of character (loquacious, “ironic” attitude, self-amused) in Inglorious Basterds. My personal mantra became “enough of the meddlesome Waltz.” I watched Big Eyes last night at the Aero, and Waltz’s “ooooh, tee-hee…look at how icky I can be!” routine pretty much smothered whatever enjoyment I might have otherwise gotten from this moderately okay, half-decent film.

“Yes, but he was aggressive and belligerent and nearly the size of Richard Kiel, and he had just shoplifted a liquor store, ignored a police officer’s order to walk on the sidewalk rather than the middle of the street, slugged the officer, tried to wrestle the officer’s gun away and managed to convince the officer (however excitable and unprofessional the officer’s final response might have been) that he might get clobbered into unconsciousness so if you poke a hornet’s nest…sorry, man, but the kid pretty much bought it.” Note: Here’s the entire Tom Tomorrow strip, posted on 12.3. The last two panels aren’t that funny. 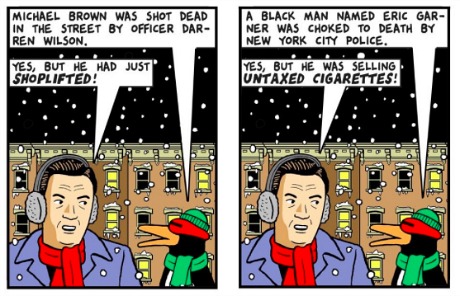 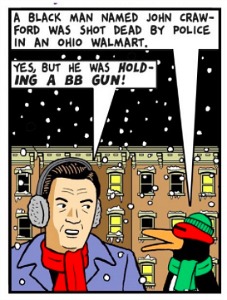 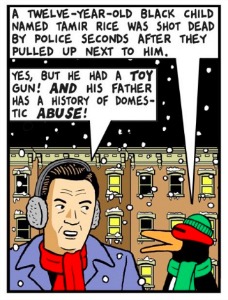