Support on Patreon Follow @wellshwood
81 Comments
Smith Is In Trouble

The relatively soft earnings of Focus last weekend ($18.7 million) have been interpreted as a sign that Will Smith is, at age 45, one step closer to being over. Or…you know, not mattering like he used to. From Six Degrees of Separation (’93) to Ali (’01) Smith did matter. He seemed embedded in the culture and vice versa. If Smith had declared in the wake of Ali that he would make no more films, I would have felt surprised and a bit turned around. It wouldn’t have felt right. But if Smith were to announce today that he’s retiring from acting in order to direct or produce, I wouldn’t blink an eye.

Smith is likable enough but I’ve never liked him that much. He’s more of a glib, glad-handing salesman than a real-deal actor. He seems to prefer ingratiating personality projects to movies, and has always seem too focused on being in big hits. His taste in films tends to run toward CG paycheck fantasies or sappy emotional stuff. I didn’t care for The Pursuit of Happyness and I hated Seven Pounds, and when he made After Earth I said “okay, that’s it, I’m off the boat.”

I spent a good portion of my non-working time last weekend watching the first ten episodes of House of Cards. The adventures of Frank Underwood are in no way boring, but neither do they take you anywhere. You just turn the show on and it flows along like a river and you with it, gliding along like a drugged zombie. And then the next episode starts up. And then the next. And you’re a little older at the end of each one. An acrid, agreeable, handsomely composed thing. Definitely engaging but to what end? Chess, power, occasional sexual favors, pressure, manipulation, setbacks, tough words, grim choices, fourth-wall puncturing, etc. Sometimes amusing, sometimes a bit draggy but not often. But it’s just plot. Not entirely but mostly. Gobs of it. A torrent. And I’ve got three more hours to go. 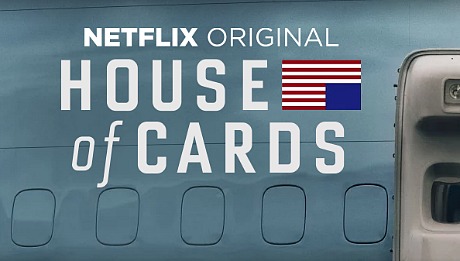 I’ve read a synopsis of the final three episodes and have therefore discovered there’s at least another whole season of House of Cards yet to go. I don’t know where I got the idea that Season 3 would wrap things up.

On Friday night I watched that BFI Bluray of Michelangelo Antonioni‘s Red Desert (’64). It was my first time. I know the Antonioni milieu and had read a good deal about Red Desert over the years, so I was hardly surprised that it has almost no plot. It has a basic situation, and Antonioni is wonderfully at peace with the idea of just settling into that without regard to story. And I’m telling you it seemed at least ten times more engrossing than House of Cards.

It was amusing to read over the weekend that the guy who stole Lupita Nyong’o‘s allegedly-super-expensive ($150K), allegedly all-pearl dress from the London West Hollywood hotel last Wednesday had returned it on Friday after being told by a jewelry appraiser that that the pearls were phony. The thief then called TMZ to announce the return and to complain about “Hollywood’s fake bullshit.” After which a source connected with Calvin Klein’s Francisco Costas said to TMZ, “Did anyone ever say they were real from Calvin Klein? I always assumed everyone knew they were fake, but I guess not.” I’m mentioning this because it seems curious that a story filed late Friday night (2.27 at 9:31 pm) by Vanity Fair.com‘s Julie Miller doesn’t even mention the fake-pearl angle despite the Guardian having filed a story an hour later (10:35 pm) that led with that apparent fact. All Miller wrote was that “the sheriff’s department has confirmed to Fox LA that the gown returned was indeed the same dress worn by Nyong’o on Oscar night, but has not confirmed any of the additional details reported by TMZ.” It’s now a bit after 4 pm in New York. Miller couldn’t re-research and file an update?

Avengers: Age of Ultron star Robert Downey, Jr. is trying to raise money for Julia’s House, a children’s hospice located in Dorset, by persuading fans to drop $10 on a chance at a lottery drawing that will result, if they win, in “the best night of your life…on earth…yet.” Hanging out at a pre-premiere party with Downey, being specially fitted for a tuxedo or dress, riding in a chopper over the Hollywood sign, etc. In the video Downey makes the pitch with his usual arch speaking manner, but he nonetheless conveys a sincere tone of condescension. Translation: “I don’t know what kind of nocturnal fun you guys get into, but I’m presuming it’s the usual stuff…movie-watching, bar-hopping, an occasional camping trip or a weekend in Vegas or Cancun. Well, for once in your life you can have some real fun by hanging in my orbit, and I’ll even consent to chat with you for four or five minutes at the party. You’ve never had this kind of experience before and after it’s over, you’ll probably never taste it again. Because you’re living on bum paychecks. But at least you’ll know what it’s like, for one night only, to swagger around in faux-first-class style at the top of the world. But you need to drop $10 to be in the running.” Click here to enter.

I’m a little concerned about Variety‘s Justin Kroll having just announced that touch-feely Ethan Hawke will reteam with Training Day costar Denzel Washington in that Antoine Fuqua-directed remake of John Sturges‘ The Magnificent Seven (’60). Hawke can play traumatized writers or detectives or younger brothers or vampire hematogloists in an action or supernatural realm, but he’s never been a Sammy Stud type and never will be, and he therefore can’t fan a six-gun with any degree of conviction. He’s too anguished, too sensitive. You can’t spend a whole career playing open-pored poetic types and then turn around and play a lethal Johnny Cool. At best Hawke can handle the Charles Bronson role, a haunted, mournful ex-gunslinger who’s looking to live a less mercenary life. I don’t even think Hawke is even cool or cat-like enough to play the James Coburn role (i.e., the knife-thrower).

I’ve been assuming all along that Washington will play the Yul Brynner role and that Chris Pratt would be playing a well-fed version of Steve McQueen. I don’t know who Haley Bennett will play but what’s a girl doing in this thing in the first place? Who’s she playing, an Annie Oakley type who’s fallen on hard times? Between Bennett and Hawke this movie is feeling kinda wussy. The legend of The Magnificent Seven (and Akira Kurosawa‘s The Seven Samurai before it) is first and foremost about the existential coolness of the guyness, and secondly about the anguish of lonely mercenaries who are good with a sword or a gun but have no lives. A gun-totin’ redhead like Bennett and an aging girlyman like Hawke spoils the brew.

Eight and a half months ago I missed a 5.17 Cannes Film Festival screening of Abel Ferrara‘s Welcome To New York due to being traumatized by the cracking of my iPhone inside the Salle Debussy. There have been no screenings since. (Or none that I’ve heard about or been invited to.) If I’d known Welcome to New York would be unviewable for the remainder of 2014 and two months into ’15 I would have shaken off my distress and attended the damn 5.17 Cannes showing. Ferrara’s film has screened at festivals and been streamed online around the world since (it aired on Japanese TV in mid January) and now, finally, the U.S. market is finally getting a theatrical and VOD looksee on 3.27. I’m sorry but even with my lifelong interest in all things Ferrara, my blood is no longer up. A film has to open at a moment of heightened cultural interest. Welcome to New York was smoking hot when Dominique Strauss-Kahn’s attorney threatened to “bring action for defamation.” An opening last September would have worked pretty well. But at this stage it feels like cold dumplings in the fridge.