The kids are always model-pretty and instinctually promiscuous in any Larry Clark film, but in my experience people of any age who live in bumblefuck towns like Marfa, which has been losing population and revenue sources since the ’90s, tend to be on the pudgy, plain, unattractive side. Then again the fact that Marfa has a thriving art community might allow for an exception. Shot in 2012, Marfa Girl was directly exhibited on Clark’s website until Spotlight picked up rights. Costarring Adam Mediano, Drake Burnette, Jeremy St. James, Mercedes Maxwell. 3.27 in theatres, 4.3 on iTunes/VOD.

When will mainstream media editors stop spelling internet with a capital “I”? Almost every day I deal with this infuriating stipulation. However you want to define the worldwide web — an environment, a digital information delivery system, an intergalactic atmosphere — “internet” is a generic term like “highway” or “radio waves” or “broadcast.”

And why do editors insist on using “O.K.” rather than “okay”? Perhaps O.K., the usage of which apparently dates back to 1839, was once an abbreviation of something or other (perhaps Old Kinderhook) but no one seems to know or care these days, and if the apathy levels are as high as they seem then what’s the point? “Okay” has been generic term for as long as anyone can remember (“Ladies, it’s okay with me”) but a certain community of editors won’t budge.

I don’t know how I missed the Sundance showings of Brett Morgen‘s Kurt Cobain: Montage of Heck (HBO, 5.4) but I’m sure I managed it in the usual fashion. I wanted to see this or that film instead and suddenly there were no more Montage of Heck screenings in Park City proper. I guess on some level I was also wondering what can possibly said about Cobain that’s fresh or startling or even semi-surprising. Not that I’m averse to seeing Morgen’s film. A limited theatrical run will happen before the HBO debut.

14 Comments
Been Paying For Bundled Cable For Decades

I’d like to find the courage to eliminate my monthly Time Warner cable service and just keep the wifi. Stand-alone streaming options for HBO and Showtime are either on the table or close to that. But I’m hesitating for some reason. Why? Habit, I guess. Despite my hating almost everything on basic cable. HBO and Showtime are the only premium pay cable stations I watch, and the only basic cable stations I visit are MSNBC, CNN and CSPAN. Movie-wise I stream from Vudu, Amazon, Hulu, Warner Archive and Netflix (via my Roku or Apple TV players) or I watch Blurays. Today TheWrap‘s Sharon Waxman quoted CBS President and CEO Les Moonves saying yesterday at “an investor conference” that “the days of the 500-channel universe are over…people are going to be slicing it and dicing it.” At the very least I’m going to demand a lowered monthly rate from Time Warner right away and then I’ll make a decision.

What’s the big deal about the British Film Institute theatrically re-releasing the absolutely last and totally final cut of Ridley Scott‘s Blade Runner (2007, 117 minutes) in England on 4.3? It’s been available on Bluray for a little more than seven years so who gives a shit? Warner Bros. screened this version (unicorn, no narration, no happy ending) in October and November 2007 at special venues in New York, Los Angeles, Washington, D.C., Chicago, Toronto, Austin, Boston and Melbourne. 33 years ago. Fiddled and re-fiddled with ad infinitum. Played out. Over. Let it go. On to the “Silver Deckard” sequel.

I don’t know if it’s been fully conveyed how dispiriting it was to watch the faintly peevish, baggy-eyed Hillary Clinton explain the Eghazi situation yesterday. I was “interested” and not unreceptive to her explanations for the most part, but at the same it began to hit me like a ton of bricks or a truckful of sand that she’s the same brittle, prickly Hillary I came to dislike and gradually loathe during the ’08 primary campaign. I’m presuming that a lot of lefties out there were, like me, suddenly going “oh, God…another 20 months of this and then, if she wins, four years of a sufficiently status-quo, center-rightish but far-from-inspiring, anything-but-forward-looking Clinton administration?” 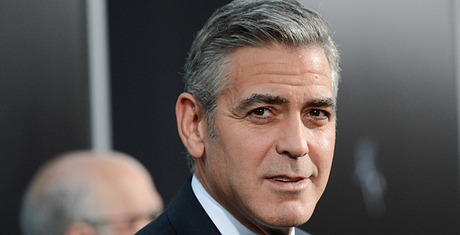 After years of believing that Hillary would be all but undefeatable if she runs in ’16, for the first time it occured to me that she could actually conceivably lose, and all of a sudden I felt the pangs of fear. Well, the tickle of nerves. She could lose, she really could. I feel a certain way when President Obama speaks and smiles and occasionally laughs, but when I think of that Hillary cackle…

But Elizabeth Warren, who inspires people on both sides of the fence because of her conviction and fervor about income inequality, is said to be uninterested in running, and Bernie Sanders, an honorable and very tough-minded Senator who gets income inequality as fully as Warren does, hasn’t an electoral prayer. Someone more dynamically appealing and electable than Hillary has to at least run against her in the primaries if not steal away the nomination, and so why not — I’m completely, 100% serious — George Clooney?

8 Comments
To Die For A Bed

HE instructions to Midnight Rider crew before attempting to “steal” train-trestle shot: “As you guys know we don’t have a production assistant five miles down the track to call and give us a warning if a train appears so if and when a train is suddenly heading in our direction we’ll only have a few seconds to clear the track. I presume I don’t have to tell you guys that priority #1 is saving the hospital bed. Obviously that doesn’t mean throwing it over the side if we hear a train horn. That bed is an expensive rental so I want it handled with care. And don’t chicken out and run to save your own skins. Be professionals and save the bed.”

From Drew McWeeny’s 3.6.15 Hitfix review: “Roar feels like Walt Disney decided to make a snuff version of Swiss Family Robinson. It may be the single most irresponsible thing I’ve ever seen as a movie, and I’ve seen it three times now. I may watch it again tonight. I am that fascinated by this record of absolute madness. Roar is the sort of thing you’ll want to see with as many friends as possible.

“Maybe I’m just fascinated by vanity projects, movies that only exist because a crazy person willed them into existence against all common sense. In this case, I’m not sure who the crazy person is, Noel Marshall or Tippi Hedren. Or maybe it took two people to have a dream this batshit crazy and dangerous. In real life, Marshall and Hedren were married, and they used their real kids as cast members.