I had my second viewing last night of Laszlo Nemes‘ Son of Saul (Sony Pictures Classics, 12.18). The previous time was in Cannes seven months ago, but it packed the same punch. I noticed an hour ago that Sony Pictures Classics has no teaser or trailer up, and it seems that there should be. Some kind of acknowledgement that a major Holocaust flick is coming down the pike in January that will qualify in December and that, you know, it’s absolutely essential to deal with it.

Shot entirely in close-ups (and occasional medium close-ups), Son of Saul is a Hungarian-made, soul-drilling, boxy-framed art film about an all-but-mute fellow (Geza Rohrig) with a haunted, obliterated expression. This titular-named survivor — a walking dead man, a kind of ghost — toils in an Auschwitz Birkenau concentration camp as a Sonderkommando — i.e., prisoners who assisted the Germans in exterminating their fellow inmates in order to buy themselves time.

I’ve noted before that I found Saul devastating. “No day at the beach but one of the most searing and penetrating Holocaust films I’ve ever seen,” I wrote on 5.14.15, “and that’s obviously saying something.”

From Shia LeBeouf we expect more than eccentricity — we expect behavior that challenges conventional notions of, like, sane or sensible. We expect intensity and vulnerability. We expect tears, drunkenness, car accidents, a fine madness, paper bags, etc. We expect to see LeBeouf teetering on the precipice of a sheer cliff in a rainstorm. So I’m not sure that allowing people to watch him as he watches all his movies in reverse chronological order is nutty enough. On top of which LeBeouf has seemed sane, calm and good-humored as he’s watched Nymphomaniac, Part 1. So…why? What’s the point of boring people? I want LeBeouf to get naked, paint himself like an Amazonian native, go up to the Empire State building’s observation deck and jump off with a parachute and then shoot colored flares in the air as he floats down to 34th Street and reads poetry into a bullhorn. The AllMyMovies performance-art piece will unspool on a 24-hour basis and will last until sometime on Thursday. It’s happening live at Manhattan’s Angelika Film Center, 18 West Houston Street. Anyone can drop by. Admission is free.

The second Carey Mulligan/Suffragette event in a week starts a half-hour from now at Spago, and then this evening Peter Landesman‘s Concussion screens at AFI fest. Will the Will Smith-starring drama play in a straight, forthright and comprehensive way or somewhat de-balled, as those hacked Sony emails indicated a few weeks back via that 9.2 N.Y. Times story? And will Smith acquire serious consideration (i.e., from tough guys like myself as opposed to the blogging glandhanders who say everybody’s a legit contender) for a Best Actor nomination? The answer will be on Twitter by 10:30 or 11 pm this evening.

I for one would prefer the Starbucks holiday cup from two or three years ago, the one that depicted a smiling Jesus of Nazareth and Santa Claus giving each other a bro hug and armed with high-powered rifles and riding from home to home in an airborne sleigh, hauled by eight flying reindeer with Rudolph in the lead position. Target practice, dropping smart bombs on ISIS, and protectin’ the wimmin folk from rapists and, you know, “illegal” persons of a questionable, other-than-white-bread complexion who are probably up to no good. 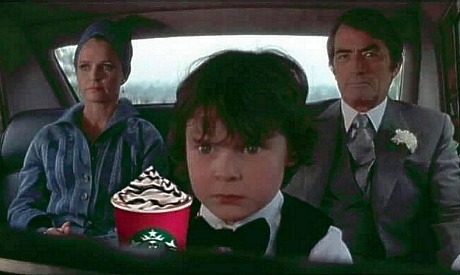 Anonymous Content’s Michael Sugar tossed me a little tidbit during yesterday’s Spotlight lunch at Craig’s, to wit: Within a year or so an “Academy app” will surface that will allow Academy members to watch all the films in awards contention in high-def, but one that will also be configured so that recording content will be impossible. No more DVDs, no video links…all of that trash-canned.

Some genius whose name Sugar couldn’t remember is working on the Academy app as we speak, he said, but it won’t be available until next year at this time via the new Apple TV (and presumably also via Roku, Chromecast, Amazon Fire and Android TV streamers).

My requests for follow-up info from Sugar haven’t born fruit so can anyone supplement this information? Has anyone heard of this app, who the developer is, when it might be available (i.e., is Sugar’s info on the money?), which streamers it might be available on (or is it strictly an Apple TV thing?), etc.

This Chasing Ice footage is almost three years old but I’d never watched it before this morning. (It was posted six days ago on Upworthy.) A Manhattan-sized glacier breaking off in one big craaahhhhck and groan and kuhr-sploosshhhh, as captured by photographer James Balog in Greenland. “That was really the smoking gun showing how far outside normal, natural variation the world has become,” Balog said in a 2012 interview with ThinkProgress. “And that’s when I started to really get the message that this was something consequential and serious and needed to be dealt with.” More Arctic landmass has melted away in the last 20 years than over the previous 10,000 years. Response from hinterland knuckle-draggers: “Drill, baby, drill!”

“Yeah, I thought Fassbender did a fine job, but Jobs came off as a prick, and no one wants to vote for a prick. Well, you can be a prick, I guess, but you need panache or some other redeeming quality. And with Jobs/Fassbender, he was just a plain old prick. This is still Leo’s award to lose. Based on what’s been leaking out about The Revenant, he’s going to have to kill a hooker the week before the Oscars or run someone over in his car to fuck this one up. It’s basically ‘Asshole who shunned his own daughter / treated others like shit’ versus ‘Guy who killed bear / survived near death to kick ass and take names’…no contest.” — posted yesterday on HE by Le Samourai.