Widely respected dp Douglas Slocombe has passed in London at age 103. Slavish editors and obit writers have highlighted the almost anecdotal fact that he shot three of Steven Spielberg‘s Indiana Jones films — Raiders of the Lost Ark (’81), Indiana Jones and the Temple of Doom (’84) and Indiana Jones and the Last Crusade (’89). Please. Slocombe’s finest work was captured in three classic Ealing films — Kind Hearts and Coronets (1949), The Man in the White Suit (1951), The Lavender Hill Mob (1951) — as well as in John Huston‘s Freud (’62), Joseph Losey‘s The Servant (1963), Anthony Harvey‘s The Lion in Winter (1968), Ken Russell‘s The Music Lovers (’70), The Sailor Who Fell from Grace with the Sea (’76), Fred Zinnneman‘s Julia (1977), Never Say Never Again (1983) and Lady Jane (’86).

The famous Tail of the Pup hot-dog stand was in business in two West Hollywood locations — 311 North La Cienega Boulevard and 329 North San Vicente Boulevard — between 1946 and 2005. I was most familiar with the San Vicente location, and I’m telling you that each and every time I pulled up to order a dog I had the exact same thought. I’m debating how I should share this.  I guess I’ll just man up and spit it out. I’m sorry but the hot-dog sculpture that more or less comprised the stand looked — this is going to sound vulgar but I’m just reporting an impressionistic fact — like a fat guy with a mustard-smeared ass attending to #2. You’re not going to tell me I was the only one. 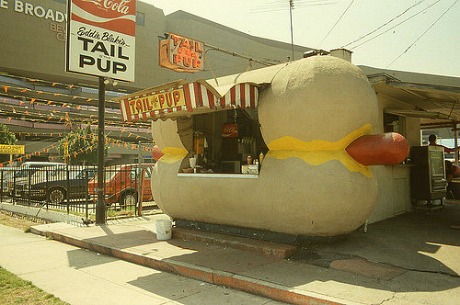 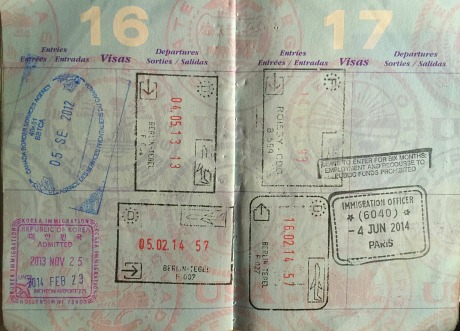 I had to get a new passport five or six weeks ago. It may sound funny but saying goodbye to the old one made me feel a little sad. This guy has been with me for nine well-travelled years.
(More…)
February 22, 2016 3:51 pmby Jeffrey Wells
16 Comments
Wild Child, Dragon Pally, Mellow Redford, Bryce Dallas Howard Without Heels

I would normally hate any film that seems to be aimed at kids and families, but Pete’s Dragon (Disney, 8.12.16) might not be too bad. I’m saying this because it’s been directed by David Lowery, who impressed everyone big-time with Ain’t Them Bodies Saints. Let’s just leave it there for now.

A light went on as I watched the end of this Santa Barbara Film Festival red-carpet interview (captured two weeks ago) with Knight of Cups producer and longtime Terrence Malick enabler Sarah Green. When Green is asked about her upcoming projects she mentions Malick’s Weightless and right away I said to myself, “Wait…what if they called it Wait List instead?” Think about it: If Weightless is anything like To The Wonder and Knight of Cups (and how could it not be?), people are going to use the associations in that word (airy-fairy, meandering, lacking in substance, cinematic helium) to beat the film over the head. But Wait List sounds cool — an existential cousin of No Exit. “All right, sir, you’re on the wait list for the 9:30 pm flight to Oakland.” Is “Oakland’ a figure of speech? Where exactly is the plane bound? And who’s the pilot? Is Wait List some kind of mystical allusion to the fact that we’re waiting to die? On a scale of 1 to 10, Weightless is a 3 and Wait List is at least an 8 if not an 8.5. Incidentally: Listen to the Stepford wife voice of the woman asking Green the questions. She sounds like an SNL comedienne pretending to be a Barbie doll.

I’m assembling a little assessment piece about the Best Picture showdown between The Revenant and Spotlight (don’t kid yourself — The Big Short is in third place), and a few minutes ago I asked several industry friends for any input they could offer — qualifications, agreements, arguments. Voting isn’t over, remember, until tomorrow afternoon at 5 pm, and I’m betting that a lot of people are on the fence about this. It’s been that kind of year, as we all know.

And most of their voices haven’t been heard, really, except by way of SAG’s ensemble award, which of course went to Spotlight.

The rallying cry is “those of you who are pissed about the new Academy rules, have your voice heard by voting for Spotlight.”

I am nothing if not a staunch Revenant guy. I’ve seen it five times, and I worship Ryuichi Sakamoto‘s score. I’ve heard that The Revenant needs to make $425 to $450 million to break even, and yet it seems to be safely on the way to that. It’s been doing so well all over — it’s the risk-and-success story of the year. All those awards (Golden Globes, BAFTA, DGA) and all that dough.

But my journalist heart-of-hearts belongs to Spotlight. And you know that the classic surprise happy ending on 2.28 would be if Spotlight takes the prize.

If Spotlight doesn’t win…well, okay. At least the Open Road team gave it the old college try, everyone gave it a good run, and the film is certain to double up on that revenue on home video. Everyone involved can be proud of Spotlight being at least the #2 choice among the three Best Picture finalists at this stage in the game.

“The Revenant has it in the bag” narrative stems from three things, I’m told — the industry consensus awards (DGA and BAFTA awards for Revenant/Inarritu, the PGA not being a Revenant win, the SAG ensemble being for Spotlight), the blogaroonie narrative & the massive ad buys by the Fox/Revenant team.

Last night John Oliver‘s Last Week Tonight ran a satirical video essay on the #OscarsSoWhite controversy. Clever and funny (“This guy is The Last Samurai?”), but it still sidesteps Ridley Scott‘s excerpted rationale about financing big-budget movies, to wit: “It’s hard to raise financing when my lead actor is Mohammed so-and-so from such-and-such.” The audience groaned at the Scott quote, but it is hard to raise financing without strong marquee names. The first difficulty with Exodus: Gods and Kings was the fact that it wasn’t very good, but it would have been far less annoying if a charismatic Middle-Eastern actor had played Ramses instead of Joel bane-of-my-existence Edgerton. And yet financiers would have certainly said “no” if Scott had insisted on casting a charismatic Middle-Eastern actor as Moses instead of Christian Bale. 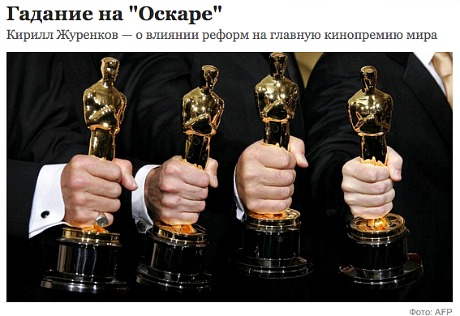