Support on Patreon Follow @wellshwood
29 Comments
SPC Has Grandslam Contender With Call Me By Your Name, But How Will They Handle It?

There’s no question that Luca Guadagnino‘s Call Me By Your Name (Sony Pictures Classics, 11.24), which premiered two and a half months ago at Sundance and then screened at the Berlinale, will be regarded as a major Best Picture contender once the 2017 award season begins around Labor Day.

But how aggressively will SPC push it, especially given the fact that Call Me By Your Name appears to have an excellent shot at reaping nominations in several categories. Should they perhaps consider breaking tradition by working with a major-league Oscar strategist? Seems warranted.

SPC is renowned for supporting their award-calibre films in a committed, dutiful fashion. But they’ve never gone “full Harvey” when it comes to this or that contender. They never seem to really pull out all the stops, being frugal-minded to begin with (as all good businesspersons must be) and having long ago adopted a “favored nations” philosophy — equal treatment across the board — when it comes to award-season promotions.

By this standard SPC would this year be plugging Happy End, their Michael Haneke drama that will probably debut next month in Cannes, and the sexually repressed period drama Novitiate with as much fervor as Call Me By Your Name.

But Call Me By Your Name is different. It’s a moving, brilliantly composed, once-in-a decade relationship film that has 100% and 98% ratings on Rotten Tomatoes and Metacritic, respectively. And it could easily become a leading contender in five or six or even more categories. Here’s one of my rave posts from last January; here’s another.

Not to mention Best Cinematography, Production Design, and maybe even a Best Original Song nom for Sufjan Stevens.

The once-legendary Don Rickles, king of the insult comics, has passed at at age 90. I loved his mafia material — Frank Sinatra adored him but Rickles really seemed to despise the Vegas goombahs. The first time I tuned into Rickles was when he humiliated Roy Rogers during a late ’60s talk-show encounter. The channelling of petty, middle-class anger, particularly a kind of reverse self-loathing along with various social resentments, was the key to Rickles’ humor. He was the guy who stood at a podium or sat on the Tonight Show couch and said the ugly or mortifying putdowns that people might have muttered to themselves but didn’t dare express.

David Letterman kept having him on the show but Rickles was finished, of course, when political correctness caught on in the early ’90s. By today’s standards Rickles was a bad person — racist, xenophobic, selfish, cruel. Not that he was any of those things, but the fact that he channelled these views and feelings, which perhaps were in Rickles himself to some extent but were certainly out there among the general populace, is what his act was about. Whatever mean currents Rickles may have harbored deep down, they certainly lived and breathed within tens of millions who laughed at his material during the heyday.

Never forget that Rickles was a lifelong Democrat who never converted to Republican thinking, unlike some of his tuxedo-wearing contemporaries when they got older.

Until this morning, Adam McKay‘s Dick Cheney biopic was presumed to be a possible end-of-the-year award-season release. Four and a half weeks ago L.A. Times industry columnist Glenn Whipp included the forthcoming film as one of “ten movies we could be talking about at the 2018 Oscars.”

Now the N.Y. Times‘ Brooks Barnes is reporting that Paramount Pictures and Plan B Entertainment “hope to begin shooting in September,” which almost certainly means a 2018 release.

Barnes’ story conflicts with a 4.5 report by Variety‘s Justin Kroll, which states that “the studio and producers [are] aiming to shoot the movie in the spring for an awards-season push, similar to The Big Short.”

The fastest turnaround in Hollywood history was Otto Preminger‘s Anatomy of a Murder, which began shooting on 3.23.59, wrapped on 5.15.59 and opened on 7.2.59 — three and a half months between the start of principal and the theatrical debut. The Cheney biopic would have to be even faster on the draw if it begins in shooting in early September, especially considering the demands of having to (a) issue screeners of Best Picture contenders and (b) screen them for critics groups in early December.

So which reporter is dead wrong, Kroll or Barnes?

But at least the appalling Devin Nunes will no longer head the House Committee investigating Trump-Russia connections. 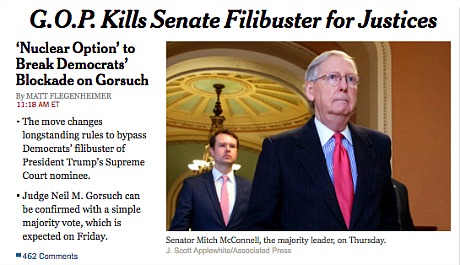