I’m sorry but Elle Fanning doesn’t look good with short, spikey hair. If I were her and had concluded that I was a boy born in a girl’s body, I might tough it out and stay a girl. It’s very shallow to say this, I realize, but it’s not just about feeling good inside but also looking good…no? I might submit to sex reassignment surgery (what do they do, surgically attach a synthetic T-1000 schlong or a live one from some guy who recently died in a car crash?) but I would keep the longish hair. Fanning’s face is too wide and hard-featured — she needs longish hair to soften the vibe. The Weinstein Co. will open Three Generations (formerly About Ray) on 5.5.

As noted two days ago, I had to take Zak to Laurel Pet Hospital to remove four tumor-like growths (two on his head, one on his back, another on his rear hind leg) and have a biopsy done. Well, the vet really dug in there and got rid of the ghastly things. Really deep, I mean. Zak looks like he was in a combination knife fight and car crash. His head, back and leg are partly shaved with all kinds of stitches where the tumors used to be. Zak’s appetite and energy are fine so who knows — maybe it’s not cancer but some godawful infection thing. I’m sure he hated being anesthetized but at least he’s tumor-free and hopefully on the mend. 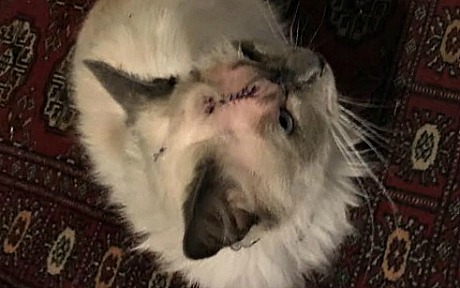 The latest HE redesign involves keeping the classic HE header logo except with a new selfie photo (taken two days ago) popped in, and below that an automatic slider that features the top three stories. I really, really love this slider thing, I swear — coolest new idea ever. After the slider you just go right into other stories…bing, bing, bing. If you’re reading the column on a laptop you’ll see other stuff on the side, but if you’re reading it on a smart phone (which is what 80% to 85% of the readership does these days) the photo on the right and other aspects won’t appear, or they’ll be pushed below or something.

But the days of being able to see the whole HE header logo in a single glance when you go to the home page on your phone will soon be over, I’m afraid. Because this is the new frontier, the new way, and that old fogey shit has to be put to bed.

Getting through the HE redesign has been mostly hell…backbreaking, patience-testing, soul-draining. While I’m automatically in love with anything that makes HE look cooler, sleeker or more exciting, I am DEAD SET against pointless change. Emphasis on the word “pointless.” If a design aspect looks good (distinctive, grabby, well-balanced) and is perfectly fine, why fuck with it?

All I can tell you is that almost every design aspect and sub-aspect has been reconfigured, and that I’ve been feeling like Kirk Douglas fighting off the tentacles of that giant squid in 20,000 Leagues Under The Sea. Because everything about the site has been tweaked, fiddle-faddled, changed, modified, re-thought, downsized, ignored, reduced, shuffled around, slightly altered, re-approached and slightly re-designed. And it’s been a constant battle to beat that shit back.

Frank Sinatra died just over 19 years ago. It doesn’t feel like that. The death of Don Rickles led me to this recollection [below] by comedian and Sinatra pallie Tom Dreesen. First time I’ve ever heard it, and it may be the best Sinatra story ever. Until this morning I’d never heard the Dennis Miller story either. Brilliantly told, superb stuff. I hate Miller’s politics, but telling a story with just the right English is an art that very few people understand. Joe Pesci‘s Tommy in Goodfellas understood it, but he would get pissed off if you told him he had the gift.

Last night’s Real Time with Bill Maher (4.8, episode #421 — Jelani Cobb, Rep. Ted Lieu, Ana Navarro, Evan McMullin, Chelsea Handler) was excellent. Well, actually not “last night’s” but “this morning’s” because HBO Now doesn’t offer the new show until Saturday morning, simultaneous with YouTube. I’m watching it now on the iPhone 6 Plus. True story: The SRO and I went walking last night, and wound strolling the La Cienega-to-Fairfax Third Street strip (Gusto, Son of a Gun, Joan’s, Berri’s (great pizza, open until 4 am), Little Door, Little Next Door Cafe, The Churchill). We walked into The Little Door and hung at the bar for two or three minutes. Bill Maher was sitting ten feet away, studying the menu like nothing else mattered. Some bearded, weathered, blue-jean-wearing guy in his 40s was sitting next to him.