The moral and ethical tongue-lashings of Homeland Security Secretary Kirstjen Neilsen, delivered on 12.20 by Rep. Luis Gutierrez (D-Illinois) and Rep. David Cicilline (D-Rhode Island), were, to my ears, musical. I didn’t really savor them until this morning, but whatever.

This yuletide-and-jungle-bells Die Hard trailer isn’t a parody — it was created by 20th Century Fox marketing.

The best thing about this jerk-off trailer is the holiday-decorated title art that appears at the end.

Posted on 7.15.18: “The notion about Die Hard being a great Christmas film has always been lame, favored by mock-ironists. Over the weekend Bruce Willis declared that Die Hard “isn’t a Christmas movie — it’s a goddam Bruce Willis movie.” That puppy has been put to bed.”

During a 12.12 Ankler podcast, Richard Rushfield and I were coming to the same conclusion about the Best Picture race, which was that things seemed to be gradually tilting in Black Panther‘s favor. It may be the most compelling Marvel superhero film ever made, but it’s not the year’s best by any stretch. (I’ve said over and over that it has a great final hour.) And that’s not the main consideration.

What matters is that it seems to have the strongest (i.e., most progressive) Best Picture narrative. Voting for Black Panther will make a lot of Academy voters feel good about themselves, more so than if they vote for Roma or A Star Is Born or Green Book. And that’s the bottom line.

Earlier in the season I was telling myself that Ryan Coogler‘s film would certainly be Best Picture-nominated, if for no other reason than the fact that Black Panther is the only 2018 contender that historians will be readily discussing 50 years from now. As I wrote on 11.11, it’s “obviously an historical groundbreaker, the greatest African-American mythology film ever made, and” — I was mocked for this — “the most socially and emotionally resonant Marvel film ever released.”

But the more I meditate about the Best Picture race, the more it hits me that Black Panther is holding the best cards.

5 Comments
The Monsters Are Here On Maple Street

“The tools of conquest do not necessarily come with bombs and explosions. There are weapons that are simply thoughts, attitudes, prejudices. For the record, prejudices can kill and suspicion can destroy, and a thoughtless search for a scapegoat has a fall-out all its own. And the pity of it is that these things cannot be confined to the Twilight Zone.”

Just as Republican dirty-trickster Lee Atwater offered death-bed apologies for his attack-dog zeal in ruthlessly torpedoing Democratic opponents (including Michael Dukakis and Gary Hart), the day will come when certain “woke”-sters will be experiencing similar guilt pangs and looking to explain their Salem-witch-trial attitudes, and specifically for having helped to eliminate or smother or otherwise push out of the way those who were fingered as imperfect or flawed or insufficiently woke.

“Weinstein, Moonves, Louis C.K. and the others…good riddance,” some former SJW will say from his or her hospital bed in 2053. “The 20-teens ignited a cultural sea-change that was necessary and cleansing, and I’m enormously proud of that. But I didn’t mean to be so zealous in going after those who didn’t live up to the woke paradigm outside the sexual harassment and assault realm.

“I wasn’t trying to hurt anyone, not really — I just felt that society needed to be more inclusive and Hollywood product to be more representational, and I felt at the time that ruining the lives of certain people who didn’t seem to be ‘on the team’…I felt that destroying a few careers was a reasonable price to pay for making the world into a better, fairer place. Like a lot of others at the time, I was using the age-old rationale that ‘you can’t make an omelette without breaking a few eggs.’ But I’m sorry now. I didn’t intend things to get out of hand.”

There’s nothing like a good laugh or smile to turn your gray skies blue. Natural-glow smiles, I mean. Deep-down ones from a real place, born of anything alpha. A perfect joke, a bit in a great comedy. Glee, affection, admiration. Smiles are as natural as breathing. I remember the first time Jett smiled, when he was three or four weeks old. He may have been mimicking Maggie or myself, but I like telling myself that smiling that moment just came to him.

A 12.21 Variety story by Gene Maddaus explores a climate of verbal abuse that’s been an unfortunate fact at Live Nation Entertainment for several months. Maddaus reports that production chief Heather Parry has been placed on a leave of absence “in response to allegations of verbally abusive behavior and offensive language.”

Birdbox is on Netflix so all I have to do is sit down and watch it. But I’d rather not. I’m very sorry but I’m fundamentally at odds with the idea of watching a film about people who have to wear blindfolds. Plus the title sounds stupid. I was into A Quiet Place but not this. Sandra Bullock and a couple of kids have to navigate a journey through a forest without using their eyes to “avoid a supernatural entity that takes the appearance of its victims’ worst fears and causes them to commit suicide,” blah blah. Trevante Rhodes, Jacki Weaver, Rosa Salazar, Danielle Macdonald, Lil Rel Howery, Tom Hollander, BD Wong, Sarah Paulson, Colson Baker, John Malkovich…nope.

A couple of nights ago I finally saw Jon S. Baird‘s Stan & Ollie (Sony Classics, 12.28). It’s an entirely congenial and bittersweet end-of-the-road saga. Basically about a couple of old world-famous pros dealing with their issues, not the least of which is facing the humiliation of no longer being the top-of-the-heap headliners that Stan Laurel and Oliver Hardy were in the late 1920s and all through the ’30s.

Steve Coogan and John C. Reilly are absolutely brilliant in their respective titular roles. I enjoyed Coogan’s performance a tiny bit more than Reilly’s — he seems a bit more possessed — and I rather preferred the character of the focused and screwed-down Stan more than Oliver, who was more of a live-and-let-live, “enjoy the food and the golf game while you can” sort of guy. The difference between them is distilled in the below scene.

Oliver Hardy: We’re friends because Hal Roach put us together. And the only reason we stayed together was because the audience wanted it. I have real friends. And yes, we play golf. And we go to ball games. And we have sauerkraut on our bratwurst.
Stan Laurel: People will remember our movies long after you’ve finished your hot dogs. You know something? You’re just just a lazy-ass who got lucky ’cause you met me.
Hardy: Lucky? To spend my life with a hollow man who hides behind his typewriter? You’re not real, Stan. You’re hollow. You’re empty.
Laurel: I loved us.
Hardy: You loved Laurel and Hardy. But you never loved me.
Laurel: So what?


What’s so hollow about working on material and being focused on career moves? Anyone who’s really into writing and mining inspiration knows that “hiding behind a typewriter” never enters into it. In any two-man partnership there’s only room for one laid-back golf player. Hardy believes that his “real” friends are the ones he laughs and chuckles with between putting greens and banquet meals. He’s wrong.

The moon has never seemed all that far off. A good distance, of course, but not crazy-far. As a kid my calculations told me it was maybe 50,000 miles away. I would look up, gauge the moon’s size, consider the fact that lunar gravitation has something to do with ocean waves and calculate that with the earth’s diameter being 8000 miles the moon was maybe eight earth-sizes away. Okay, make it ten or 80,000 miles. The NY-to-LA drive is a little less than 3K so a flight to the moon, I figured, was the equivalent of 26 coast-to-coast drives. 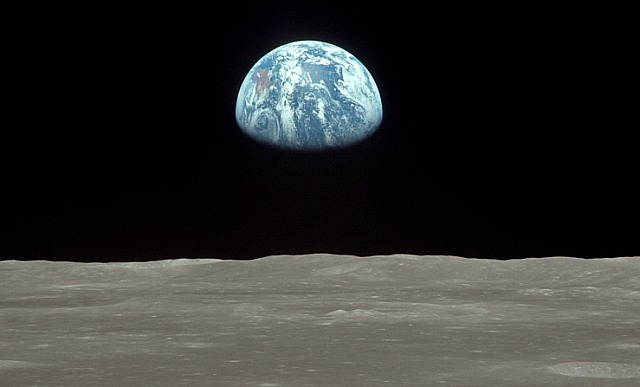 It’s nothing like that, of course. The actual earth-to-moon distance averages 238,555 miles, which works out to 79 NY-to-LA road trips.** Or, if you prefer, the earth’s diameter times 29. If the earth is a basketball and the moon is a small apple or cherry tomato, the distance between them is 24 feet. Which strikes me, no offense, as a bit much.

In fact, between the earth and the moon you could fit all of the planets in our solar system end to end — Mercury, Venus, Mars, disappointing non-planet Jupiter, Saturn, Uranus and Neptune. (Pluto was demoted from planetary status in 2006, just like Hollywood Elsewhere was demoted this year by the Sundance Film Festival.)

7 Comments
Song I Carry Inside

Starting in ’02 and sporadically from then on, I’ve been listening to “Nothing Man” — replaying over and over at first, presently now and then, sometimes forgotten or put aside but never entirely gone. It’s like a friend, this song. Something I trust and rely upon from time to time.

Springsteen’s lyrics and vocal delivery are on the opaque side; the hook aspects have more to do with the “duh-doo-doo-doo-doo” choir at the end plus the French horn plus the modified, low-register cymbal crash it begins with.

Above and beyond the allusion to 9/11 horror (“misty cloud of pink vapor”), it resonates, I think, because everyone feels wiped out or hollowed out at one time or another — alive and focused as far as it goes but without much inside, at least for the time being.

Anyway, I decided roughly 16 years ago that this might be my favorite Springsteen song of all time.

I wasn’t uninterested in or indifferent to last night’s insanity, and particularly the protest resignation of Defense Secretary Jim Mattis, “the last adult in the room”; I just couldn’t think of anything to add. Dust and shrapnel, incoming missiles, lashing out, wheels coming off.

It’s too much to cram into one tight paragraph…U.S. troop departure from Syria and forthcoming 50% Afghanistan pullouts, Russia advantage and “malign actors,” an impending government shutdown over the wall because Trump fears the apocalyptic wrath of the Ann Coulter / Freedom Caucus righties, the eroding or tumbling stock market…it’s just wild instability and bunker-mentality chaos…a madman tailspin.

Filed last night by N.Y. Times reporter Nicholas Fandos: “Hawkish Republican lawmakers, still reeling from President Trump’s decision on Wednesday to yank American forces from Syria, found fresh cause for alarm on Thursday, after Defense Secretary Jim Mattis resigned in protest and reports circulated that the president was preparing to pull thousands of troops out of Afghanistan.

“Coming on the same day that Mr. Trump balked at an agreement to avert an imminent government shutdown, the rapid-fire developments prompted rare warnings from within Mr. Trump’s own party that his foreign policy could be leading toward dangerous instability on the global stage.

“In perhaps the most surprising response, Senator Mitch McConnell of Kentucky, the usually circumspect majority leader, issued a cutting and lengthy statement, saying: ‘It’s essential that the United States maintain and strengthen the post-World War II alliances that have been carefully built by leaders in both parties. We must also maintain a clear-eyed understanding of our friends and foes, and recognize that nations like Russia are among the latter.’