Anyone who claims that a presidential candidate doesn’t need to persuade millionaires and billionaires to write checks after hustling them in this or that pricey environment (yachts, wine caves, five-star restaurants, what-have-you) is flat-out lying. Yes, you can go the Bernie Sanders route and depend entirely on individual, small-level donations, but Kamala Harris is out of the race because she couldn’t keep her campaign financially afloat. The fact that Pete Buttigieg out-hustled her makes him a bad guy? Barack Obama didn’t finance his ’08 and ’12 presidential campaigns with money from wealthy supporters? Democratic purity derangement syndrome is one of the things Average Joes can’t stand about lefties.

Signed, sealed, delivered, done — Jennifer Hudson as Aretha Franklin for Best Actress. Unless, you know, Respect (United Artists, 10.9) turns out to be on the same level as Kasi Lemmons‘ Harriet and is more or less dismissed. But if it turns out to be even half-decent, Hudson is a lock — Jamie Foxx as Ray Charles all over again.

Directed by Liesl Tommy, Respect will presumably include a depiction of how the recording of “I’ve Never Loved A Man” came together at Alabama’s Muscle Shoals recording studio. The savior was session man Spooner Oldham, who came up with the Wurlitzer riff that made that song work from the get-go.

If Respect doesn’t have this scene, forget it. The episode was passed along in Magnolia Pictures’ Muscle Shoals, a 2013 documentary.

Nat Faxon and Jim Rash‘s Downhill (Fox Searchlight, 2.14.20) is an English-language remake of Ruben Ostlund‘s Force Majeure (’14). The Downhill trailer suggests that while the feature has been slightly massaged to allow for a dab or two of humor, it’s almost an exact copy of the original.

Ostlund’s film basically asks “who are we deep down?” It suggests that some of the noble qualities we all try to project aren’t necessarily there.

The inciting incident is a massive, fast-approaching snowslide that threatens to bury several vacationers sitting on an outdoor terrace at a pricey ski resort, and specifically a husband and father named Tomas (Johannes Bah Kuhnke) who succumbs to instinct and decides to run for his life as the wall approaches.

After the danger passes wife Ebba (Lisa Loven Kongsli) resents what she regards as Tomas’s cowardice and betrayal. Tomas should have either (a) embraced her and their two kids and hunkered down in the hope that the landslide wouldn’t smother and kill them, or (b) quickly leapt to his feet, grabbed her and the kids and yanked them all from their seats and into the relative safety of the resort’s interior. Or…you know, something other than just try to save his own terrified ass.

HE viewpoint: Blind instinct tends to rule when a person feels threatened by imminent death. Most of us would hightail it when a mountain of snow is approaching, I think. Any guy who says “in this horrible situation I would hug my wife and kids in the last few seconds we have before being smothered to death”…anyone who insists they would not try to escape suffocation is almost certainly lying.

You can bet that if I were, say, ten years old and I saw an avalanche coming while sitting outdoors with my dad, mom, sister and brother, I would definitely run for cover. Dads aren’t expected to do this, I realize, but human nature is human nature.

“For the Republicans who have fallen in line with him…I don’t understand that. It’s a disgrace. It’s beyond a disgrace. Shame on them. Shame on all of them. They’ve lost, to me, all reason. They have an obligation and a duty to stand up to this guy…”

“I know I live in New York and I’m living in a certain world. It’s not out there in the Midwest and other parts of the country. But there’s right and there’s wrong. I know when I see what’s being done, that’s wrong. And those people are supposed to represent us and they are supposed to know and stand up for what’s right in the country and they’re not doing that.”

“[Kevin] McCarthy, Lindsey Graham. Shame on them. What are their families, what are their grandkids — if they have any, I don’t know — but it’s it’s it’s awful.” — Robert De Niro, excerpted from episode 4 of “Rumble with Michael Moore.” The good stuff starts around the 6:30 mark.

De Niro: “The only thing [Trump has] done, the only contribution I see that he’s given to this country and the world is that he’s taught us that we can never allow it to happen again.”

HE to De Niro: In all honesty, if fair-minded humanists and Democrats want to make sure that a Trump-like figure never happens again, never again nominate an elite, well-honeyed, insulated, baggy-eyed, obviously non-charismatic person like Hillary Clinton to be president. Trump wasn’t elected because he seemed like such a wonderful guy — he was elected in part because the bumblefucks hated Hillary.

I recently bought Criterion’s Tunes of Glory Bluray. I felt such holiday excitement as I popped it in, sitting on an ottoman with a cup of warm cider and anticipating some kind of luscious, old-school color bath, and in my favorite aspect ratio of 1.66:1…perfect!

Naturally I expected a “bump” of some kind — some kind of visual upgrade that would make this 1960 Ronald Neame film look like dessert. This is what Blurays are supposed to deliver, after all — versions of well-known films that look a little better than ever before, like they came straight from the lab, all fresh and gleaming. If Neame was somehow sitting beside me I would want him to exclaim, “My God, it’s never looked so good…heaven!”

Alas, the Criterion guys don’t necessarily believe in bumps. They deliver them frequently, but not always. Sometimes they get into one of their pissy moods and decide to throw a change-up.

Within five or ten minutes of watching their Tunes of Glory Bluray, I knew I’d been burned.

Sometimes Arthur Ibbetson‘s cinematography would look sufficient or, as some say, “good enough”; at other times it looked vaguely washed out and in one or two portions almost absurdly grainy. And it certainly lacked any semblance of what I would call sharpness. 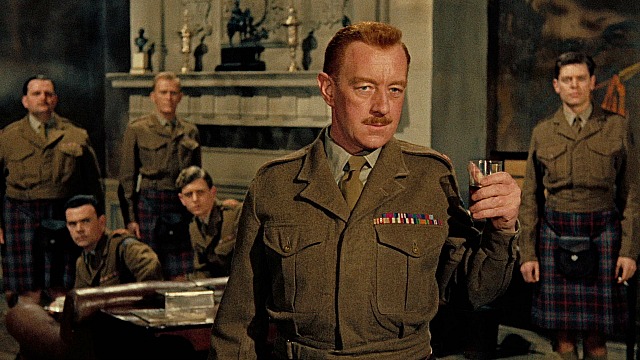 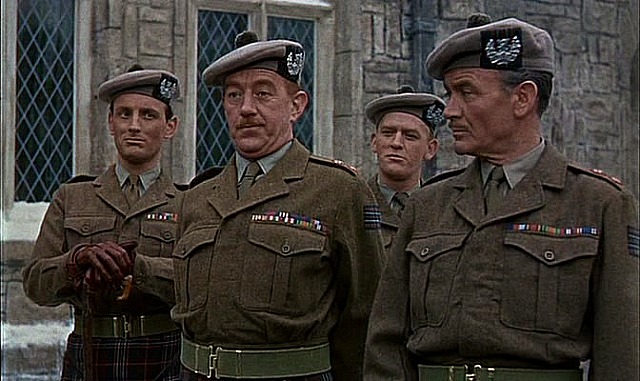 Most of the time I felt as if I was watching a 16mm print bring projected onto somebody’s living room wall.

If you want to adopt a go-along attitude you could say it looks fine for the most part. There’s nothing “wrong” with the appearance of this 59 year-old British film except for the fact that it looks completely unexceptional and therefore hugely disappointing.

From Gary Tooze’s recently posted DVD Beaver review: “It shifts quite dramatically from the weak SD but never looks crisp or glossy, maintaining the film’s grit and grain textures to the significantly higher degree offered by the HD resolution. There is an inherent softness and lack of depth that can give the perception of losing detail — it looks far more film-like in motion. I do see that it is slightly cropped on both side edges of the frame as compared to the old DVD. Overall the digital presentation gains significantly on the 4K restored Bluray.”

HE response: It’s fine but underwhelming…be honest! A first-rate transfer that will put you to sleep.

Criterion’s Tunes of Glory Bluray was restored in 2018 by The Academy of Motion Picture Arts & Sciences Film Archive and The Film Foundation in collaboration with Janus Films and The Museum of Modern Art. Restoration funding provided by George Lucas Family Foundation. The 35mm Eastman Color original camera negative and 35mm optical track positive are the sources of this digital restoration. 4K Scanning and Image Restoration by FotoKem Audio Restoration by Audio Mechanics.

I usually sleep six hours a night, sometimes seven. For a while I was in the habit of taking afternoon naps, which seemed like a good idea. But lately I’ve been taking Guarana, a natural caffeine-heavy appetite suppressant, and so the napping is more of an in-and-out thing. All to say I couldn’t wake up this morning to save my life. Slept until 10 am. Which explains the late start. On top of which I was ordered yesterday morning to vacuum all the rugs, etc. So that partially explains yesterday’s delay.

And here’s…Jennifer Jason Leigh, the unseen co-contributor and invisible costar of Marriage Story!

For seven or eight years Joe Wright was a cross between Chris Nolan, Sam Mendes and Steven Spielberg. Pride & Prejudice, Atonement, The Soloist, Hanna, Anna Karenina. I will never back away from the view that Karenina was drop-dead brilliant — the most thrilling and innovative adaptation of Tolstoy’s 1877 novel ever made. Then the calamity of Pan happened. Then Wright recovered somewhat with Darkest Hour, a conventional but reasonably effective biopic with an Oscar-winning lead performance.

The Woman in the Window opens on 5.15.20. Written by Tracy Letts, shot by Bruno Delbonnel, scored by Danny Elfman and produced by Scott Rudin.

HE to Christianity Today‘s Mark Galli: The train left the station a long time ago, pal. Evangelical Christians have removed the entire Christian community from any ethical conversation about anything, for at least the next thousand years. Christian hucksters have been standing with rightwing corporate swine for decades now, starting with Reagan. Nobody’s listening. Yeshua will never stop throwing up. Over and out.

From Galli’s 12.19 editorial: “We have reserved judgment on Mr. Trump for years now. Some have criticized us for our reserve. But when it comes to condemning the behavior of another, patient charity must come first. So we have done our best to give evangelical Trump supporters their due, to try to understand their point of view, to see the prudential nature of so many political decisions they have made regarding Mr. Trump.

“To use an old cliché, it’s time to call a spade a spade, to say that no matter how many hands we win in this political poker game, we are playing with a stacked deck of gross immorality and ethical incompetence. And just when we think it’s time to push all our chips to the center of the table, that’s when the whole game will come crashing down. It will crash down on the reputation of evangelical religion and on the world’s understanding of the gospel. And it will come crashing down on a nation of men and women whose welfare is also our concern.”

I’m presuming this Cats sing-along wasn’t spontaneous. A group of devotees (and likely Kevin T. Porter pallies) almost certainly planned and rehearsed before the fact. Probably a less-than-1% chance that it happened otherwise. But if it did, it means something. Either way HE applauds the spirit of those who took part, even if they’re compulsive exhibitionists.

Significant info: Kevin Porter is a comedian, writer, podcast producer and, let’s just face it, A GOOD TIME.
He is the host and producer of the Good Christian Fun podcast. HE feels obliged to point out that in the current environment there is no such thing as “good Christian fun.” There is also the distinct possibility that given his religious leanings, Kevin may be a Trump supporter.

We got on our feet to sing and dance to Mr. Mistofelees like it was the last day of camp pic.twitter.com/4houe2jBIP