40 Comments
Bumped to Streaming But No Biggie

Posted on 3.5.20: “It would appear that Gerard Bush and Christopher Renz‘s Antebellum is a female-branded revisiting of Twelve Years A Slave by way of H.G. Wells. Successful author Veronica Henley (Janelle Monae) suddenly becomes a slave in the cotton fields after time-travelling back to the Antebellum pre-Civil War South. The trailer tells us, however, that it’s Veronica’s fate “to save us from our past.” So she’s going to overturn slavery in the same way that Rod Taylor lead an Eloi rebellion against the Morlocks? Or lead a Spartacus-like revolt a la Birth of a Nation? Or maybe a little Harriet action? Or transport her plantation pallies back to 2020 and find them jobs in online publishing?” 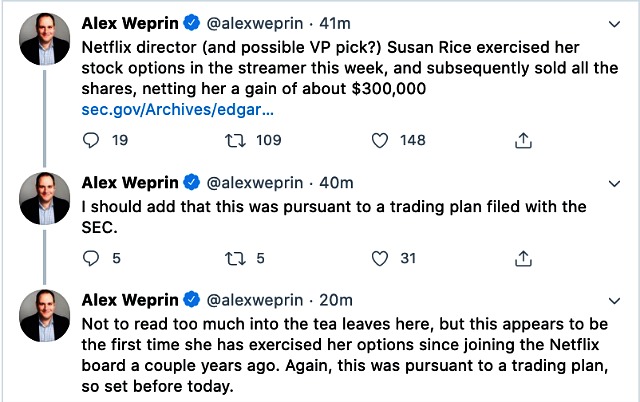 Judas and the Black Messiah (Warner Bros., 2021) is a biographical drama film about American Black Panther Party activist Fred Hampton (Daniel Kaluuya) and how FBI informant William O’Neal (Lakeith Stanfield) inadvertently aided in the murder of Hampton. Directed and produced by Shaka King, from a screenplay by King and Will Berson, and a story by King, Berson, and Kenny and Keith Lucas. Costarring Jesse Plemons, Dominique Fishback, Ashton Sanders, Algee Smith and Martin Sheen.

From a 1.25.90 Chicago Reader piece by Michael Ervin titled “The Last Hours of William O’Neal“. The subhead reads, “He was the informant who gave the FBI the floor plan of Fred Hampton’s apartment. Last week he ran onto the Eisenhower Expressway and killed himself.” 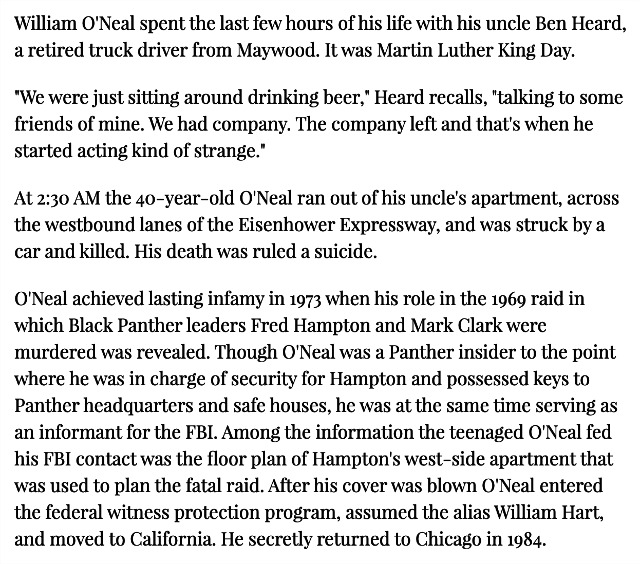 I had some lenses left over and the only frames that fit them are made by RayBan. I wanted bright blue frames but they aren’t available, the eyeglass guy said. All he had were lavender or greenish-yellow frames, so I went with lavender. I’ve been wearing semi-flashy socks and eyeglasses for a long time now so no biggie. 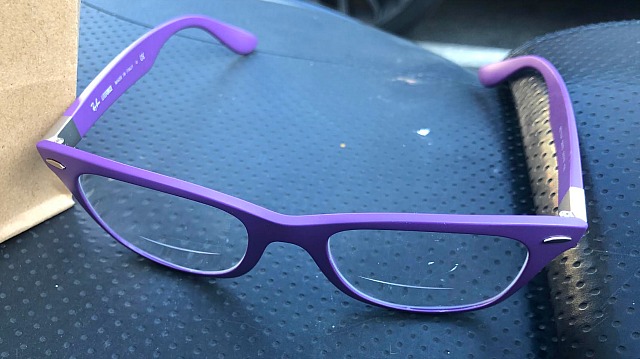 At 1:19 pm today Exhibitor Relations Co. (‪@ERCboxoffice‬) announced that Ron Howard‘s Hillbilly Elegy (Netflix, sometime in November) has been rated R for “language throughout, drug content and some violence.” HE question: In what realm does “some” violence warrant an R rating? And who cares about drug use and salty language? What is this, the mid 1950s?

Sundance ’21 will basically be doing a TIFF next January, which is to say they’ll mostly be streaming films with a drastically reduced physical presence in terms of theatres, ticketing and office space. And they’re cutting down from the usual ten days to seven (Thursday, 1.28 through Wednesday, 2.3).

Plus limited screenings, a heavy digital component and, if it’s “safe” again, an assortment of world premiere screenings in a number of U.S. states all around the country. In short, they don’t see the pandemic situation getting much better six months hence.

From a 2.1.20 HE rant called “Official Verdict: Sundance ’20 Blew Chunks“: “Like I’ve said a few times, Sundance has more or less woked itself into a corner, and now it’s pretty much stuck with that brand or identity badge and can’t hope to free itself. The wokeness has been strident and persistent. The die is cast.”

There was always the chance that Charlie Kaufman might try to re-shape Iain Reid‘s “I’m Thinking of Ending Things” into something less spooky and malevolent and a little more dryly comedic and perverse (i.e., Kaufmanesque).

The just-released trailer for Kaufman’s film suggests not. It feels like a psychological Middle American horror film by way of a 21st Century “Wisconsin Death Trip“…perhaos a subtle, less emphatic version of Ari Aster‘s Hereditary or at least a film that flirts with the creepy. Jesse Plemons and Jessie Buckley are the victims; Toni Collette and David Thewlis are the ghouls.

3 Comments
Movie-Crazy Kids On The Run

I can’t find the embed code for the trailer for Adilkhan Yerzhanov‘s Yellow Cat as it seems to be temporarily exclusive to Indiewire.

Pic is a Badlands-influenced “kids on the run” flick. It’s clearly aimed at the scholastic cineaste crowd (Guy Lodge, Peter Debruge, Eric Kohn, David Fear, Alison Willmore) as well as free-thinking types like myself. It will premiere under the Horizon section of the 2020 Venice Film Festival (Wednesday, 9.2 through Saturday, 9.12).

Free the Yellow Cat trailer from the Indiewire cage! It needs to be free and find its own feet and be re-posted a thousand times!

You’ll notice that the music in the Yellow Cat trailer sounds awfully close to Carl Orff’s “Gassenhauer”, the theme for Terrence Malick’s afore-mentioned Badlands (’73). The same music (or a close facsimile) was adopted by Hans Zimmer for his score for Tony Scott and Quentin Tarantino‘s True Romance (’93). 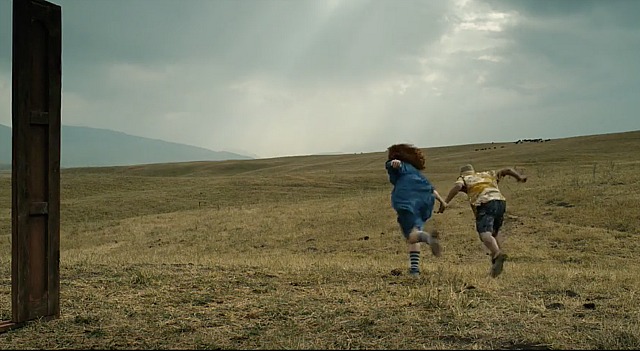 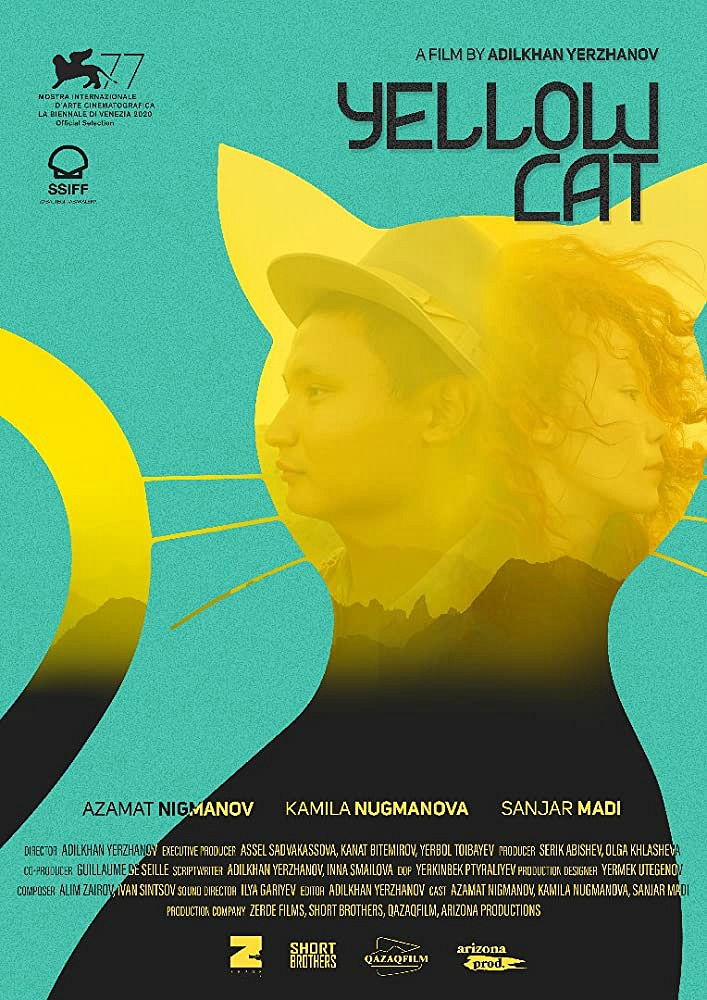 This morning a producer friend sent me the below video (shot in September 2019) of Cafe Deux Magots. I watched, frowned and sent her the following:

In early October 1987, my ex-wife Maggie and I (plus my parents, her brother Andy and his girlfriend and three or four others) went to Cafe Deux Magots for a post-wedding reception after we exchanged vows at St. Julien Le Pauvre. The song in the air was Sting’s “We’ll Be Together.” Mild, warmish weather. Nearly 33 years ago.

I haven’t been to Cafe Deux Magots since then. It’s been around since 1884, and particularly since Ernest Hemingway, Gertrude Stein and F. Scott Fitzgerald’s Paris heyday in the ‘20s (although Hemingway preferred Cafe de Flore), and I seem to recall it being a fairly cool Left Bank haunt when I first visited Paris in June of ‘76.

But 11 years later this storied place and in fact the whole neighborhood had begun to transition into an aggressive tourist destination, all but swamped with Americans, Germans, Brits and the like. In the same category as Cafe de la Paix near the old Opera house.

Now it seems to have been scrubbed of that old vibe and atmosphere. Still the same place, of course, but at the same time too new and gleaming and renovated. And swarming with Middle Eastern conspicuous consumption types along with all the other rubes. They kill da coolness.

A truly great Paris cafe has to radiate a certain present-tense hum (locals enjoying a slight edge over tourists) and be well maintained, but at the same time it needs to feel a tiny bit musty and tainted by history — pleasantly odorous (strong coffee, unfiltered Galouises, fresh and fragrant croissants) and faintly haunted. Today’s Cafe Deux Magots looks and feels like a Disneyworid recreation.

“Lemoine explained that he decided to make the video to express his frustration after hearing about Disney’s decision to go straight to Disney Plus. He said that he has been promoting Mulan ‘for months’ and that he and his fellow operators had hoped the film would be a key title to boost their re-opening efforts. Cinemas re-opened in France in June, and Lemoine admitted it has been an uphill battle since then to attract audiences, even in the famously cinema-hungry nation.

“It’s really a huge effort to stay open right now for most of us, but we were assuming there would be some ambitious movie releases in the coming weeks,” he said. “By losing Mulan, we lost the possibility of offering our audiences a long-awaited film that would have helped us after these past hard weeks. It is also a bad message to send to the public [who had been expecting a theatrical release].”