I’ve never seen an urban car chase sequence like this before…not once! Talk about getting your socks blown off by sheer William Friedkin-level originality.

Spoilers: The first half of Episode #5 of Mare of Easttown (“Illusions”) felt spotty and weird, but the second half was great, especially the bang-up Silence of the Lambs finale.

Text to friend as I watched: “So episode 5 is Room? The creepy captor takes turns with two female captives? Good God.

[Community wake scene] So the old, white-haired, overweight widow stands up and announces to the mourners that way back when he had an affair with Mare’s mom, Helen (Jean Smart)? What kind of idiot does such a thing? Let sleeping dogs lie.

“[Later] Mare has been suspended for planting evidence, but she goes on a dinner date with Det. Zabel (Colin Peters), her professional partner? Kind of a dumb-ass thing to do, no?

“This is not a great episode.

“Wait, take it back — excellent ending! Totally borrowed from the climactic handgun confrontation between Agent Starling and Buffalo Bill — creepy villain living in grubby man-cave environment, nearby captive female hostage[s] pleading for rescue, wounded Mare at a disadvantage, bad guy goes down in a hail of bullets.”

Three or four days ago N.Y. Times critic A.O. Scott posted a piece called “What I Learned About Democracy From the Movies,” and subtitled “Seven films that paint a portrait of America in all its contradictions, inconsistencies and outright delusions.”

Scott singles out Martin Scorsese‘s The Wolf of Wall Street for sending the kind of conflicting message that Hollywood has long excelled at.

“There are those who insist that Wolf is a ferocious indictment of the money culture, or at least of the shallow scammers who treat the serious business of capitalism like a casino. And there are others who can’t stop ogling the drugs, the cars, the boats and Margot Robbie, even if the spectacle makes us feel a little squeamish.

I’ve never forgotten LexG saying at the time that he liked The Wolf of Wall Street “for the wrong reasons.”

On 12.13.13 I said the same thing that Scott wrote. The piece was called “Druggy Wolf of Wall Street is New Scarface”:

“I saw Martin Scorsese‘s The Wolf of Wall Street (Paramount, 12.25) for the second time last night, and it felt just as wild and manic as it did the first time. (And without an ounce of fat — it’s very tightly constructed.)

“And yet it’s a highly moral film…mostly. Scorsese, Leonardo DiCaprio, Jonah Hill and all the rest are never really ‘in the room’ with these depraved Stratton Oakmont brokers. They’re obviously juiced with the spirit of play-acting and pumping the film up and revving their engines, but each and every scene has an invisible subtitle that says ‘do you see get what kind of sick diseased fucks these guys were?…do you understand that Jordan Belfort‘s exploits redefined the term ‘asshole’ for all time?’

“Why, then, did I say that Wolf is ‘mostly’ moral? Because it also revels in the bacchanalian exploits of Belfort and his crew. It broadly satirizes Roman-orgy behavior while winking at it. (Or half-winking.) Unlike the Queens-residing goombahs in Goodfellas, whom he obviously feels a mixed affection for, Scorsese clearly doesn’t like or relate to the Stratton Oakmont guys. But the 71 year-old director also knows first-hand how enjoyable drug-abuse can be for cocky Type-A personalities in groups, and he conveys this in spades.

From World of Reel‘s Jordan Ruimy: “[Herewith] a chart of the most likely films to make it to Cannes official competition in July. There have been a lot of pieces from the trades speculating inaccurately about some films. I’d rather be on the cautious side. Yes, last-minute changes by Fremaux and his selection committee can happen in the blink of an eye. However, as we speak, these are the titles with the best shot as of 5.17.21 (HE = exceptional HE interest):

Ruimy: “Whether it actually makes it to Cannes is a whole ‘nother story since Apple TV, which recently bought the rights to the film, may want to wait it out for the fall festivals.”

HE retort: Although the Apple deal was announced just a few days ago (5.12), negotiations with Apple had certainly been ongoing and perhaps had been finalized for a while before this. The idea of debuting the film at July’s Cannes festival couldn’t have been a secret to anyone involved. Why show it to Fremaux if interested parties weren’t open to the idea?

Here’s a 4.13.20 summary of a 30-minute video interview given by Joel Coen and Frances McDormand about The Tragedy of Macbeth. The piece is from The Film Stage‘s Jordan Raup.

I’ve been a huge fan of Polanski’s Macbeth for nearly all my moviegoing life.

If only Ruth Bader Ginsburg had stepped down in ’14 or ’15 and thereby allowed President Obama to nominate Merrick Garland (or someone similar) to fill her Supreme Court seat, we wouldn’t be in this mess. But she didn’t and here we are with Amy Coney Barrett sitting in Ginsburg’s chair, and Roe v. Wade, it appears, is about to be…well, not exactly struck down but diminished.

As I understand it, Roe v. Wade, which became law in 1973, said that states can’t outlaw abortions for any fetuses before they reach “fetal viability“, or roughly 23 or 24 weeks into a pregnancy.

Jesus, really? Roe says no abortions can be refused until after the fifth month and closer to five and a half? I somehow never quite absorbed this. If a woman decides against having a child, shouldn’t she have it aborted within a few weeks and certainly no later than two or three months, tops? Who waits five months to terminate a pregnancy? That’s fucked.

“The new case, Dobbs v. Jackson Women’s Health Organization, No. 19-1392, concerns a law enacted by the Republican-dominated Mississippi legislature that banned abortions if ‘the probable gestational age of the unborn human’ was determined to be more than 15 weeks.

“The statute included narrow exceptions for medical emergencies or ‘a severe fetal abnormality.’

“Lower courts said the law was plainly unconstitutional under Roe, which forbids states from banning abortions before fetal viability.

As I understand it, if the Supreme Court upholds Mississippi’s contested abortion law, the new reality would be that all abortions have to happen within 15 weeks. Honestly? That doesn’t sound all that crazy to me. A woman’s right to choose is assured — they’d simply have to abort no later than three and a half (nearly four) months into the pregnancy.

27 Comments
What’s Wrong With This Description?

It became common knowledge a week ago that Bennifer or BLo (pronounced “Bee-Low”) is back on. Great…the most over-covered celebrity couple of the early aughts (’02 to ’04) has returned like Banquo’s ghost. Okay, fine…if they’re happy, they’re happy. I just don’t want to hear about them doing anything or going anywhere or attending anything or fighting…none of that.

There’s just one quoted remark from a People “source” that bothers me: “[Jennifer] spent several days with Ben out of town. They have a strong connection. It’s all been quick and intense, but Jennifer is happy.”

Shouldn’t it read “and Jennifer is happy”? If you’ve been with an ex-boyfriend for several days, you’ve done so because you’re both feeling the current and it’s all good and foretold…right? And if the connection is strong, it follows that it’s been “quick and intense” since the reunion only kicked off a couple of weeks ago…yes? So why would anyone say “but” — or despite all this — “Jennifer is happy”?

In short, the People “source” is suggesting that BLo 2.0 seems a little too hormonal and whirlwind for her taste, but Jennifer is nonetheless happy riding this bronco steed. 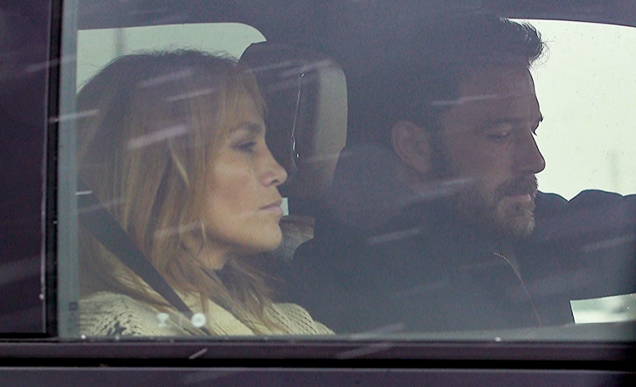