No film lover cares about Cruella (Disney, 5.28). I certainly don’t. Obviously a Disney parent punisher. Thank God such films were fewer and far between when my sons, Jett and Dylan, were tykes from the early to late ’90s. The Katzenberg period.

It’s noteworthy, I think, that a film aimed at the family trade runs 2 hours and 14 minutes? Whatever for? Yes, it’s an origin story but such an effort should be no more than 110 minutes tops, and preferably closer to 100 or even 95. Especially given the fact that Dalmatians puppies barely appear in it.

Anthony Lane: “Emotions are not toyed with glancingly [in Cruella] but stretched out and blazoned forth, and the result is that the new film is nearly an hour longer than the original 101 Dalmatians cartoon. Needless to say, any pretense that children might still want to watch a light, spirited, mutt-centered gambol has been skinned to the bone, to make way for human bitching, and anyone hoping to play Spot the Dalmatian will be sorely vexed. I counted exactly three of the beasts, plus another two at the end. In short, Cruella is more catty than canine. Grrr.”

Lane #2: “In truth, there are passages of Cruella that seem like scraps of music videos, loosely stitched together. Forget about the plot: ask your heroine to pose in splendiferous outfits; crank up the Stones, the Zombies, the Clash, or Doris Day; and, woof, there’s your movie.”

The fact that “prior to its October 2020 release in Mexican cinemas, the trailer was received with an overwhelmingly negative response from the public, including a fierce internet backlash. One stand-out complaint said that the trailer indicated ‘a classist, racist and painfully stereotypical portrait of upper and lower classes in Mexico’…this alone requires that you see it.

“The racism accusations worsened when Franco claimed the film had been the victim of ‘profound reverse racism’ and felt himself as victim of ‘hate crimes’ as a White Mexican. Franco later apologized on social media, claiming he was not aware of the impact of his response,” etc.

From my 9.14.20 review: Set in Mexico City, it’s about a violent revolution against the wealthy elites by an army of ruthless, homicidal, working-class lefties.

Director-writer Franco (After Luca, Chronic) is clearly tapping into all the insurrectionist anger out there (last summer’s Black Lives Matter protests, the Hong Kong pro-democracy movement, last year’s French Yellow Vest demonstrations) and imagining the ante being raised a couple of notches. 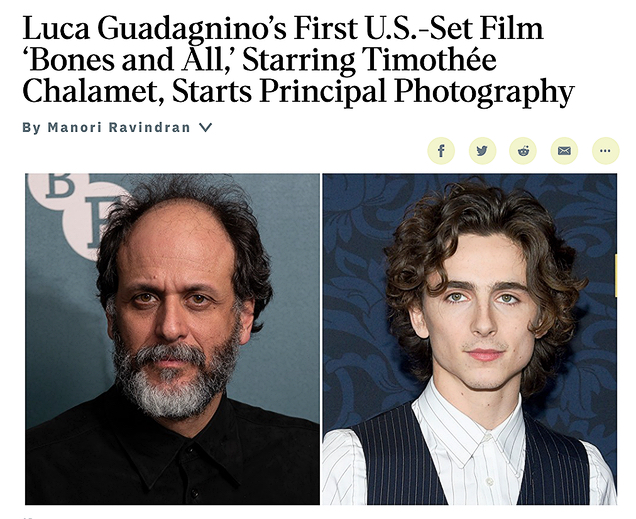 The Alan Ladd-sized Gael Garcia Bernal is still too short to be married to Vicky Krieps in a movie, at least without their size disparity being a distraction. But I’m sure Shyamalan framed their two-shots carefully or had Bernal wear “lifts” or stand on milk boxes or whatever it took.

And I don’t feel the least bit persuaded that sitting through the 90-minute version might be a good idea. This is exactly the kind of ultra-synthetic, X-treme adventure, CG overload, Indiana Jones-aspiring, family-friendly horseshit movie that, in my mind, is killing the idea of conveying real adventure. Now watch Jungle Cruise make a healthy profit when it opens on 7.30.21. Because most American moviegoers — be honest — have no taste.

[Posted by yours truly in yesterday’s “Whooshing Back To ’66 London…” comment thread] To go by the trailer, Last Night in Soho is the kind of thing Edgar Wright seems to naturally gravitate to. He loves visceral, wham-bam cinema, he’s good with “wow” concepts and has excellent visual instincts, but he has a popcorn soul…sensitivity, depth and thoughtfulness are not, shall we surmise, his strong suits,

Imagine being locked up in that fucking head of his, to paraphrase Junior Soprano. Of all the places Wright could have gone to with this premise…God. If you want a transportational taste of London ’66, watch Michelangelo Antonioni‘s Blow-Up, or listen to Revolver or Between The Buttons. If you want a reminder of how fallow and soul-draining things can be in 2021, look no further than the creative designs of Edgar W.

That said, it’s a good trailer.

No Comments
Scalding Commentary Has Been Cancelled

The mere idea of this kind of material being performed on today’s Saturday Night Live is, of course, unthinkable. The brilliant Bowen Yang aside, sensitivity has killed the spirit of high-voltage comedy on that show. Extreme attitudes (spiteful, acidic feminist vs. pompous male chauvinist pig blowhard) are used as satirical fodder here. Nobody agrees with Aykroyd and no endorsement is suggested, but ask yourself why the audience explodes with laughter after the Aykroyd remark heard at 1:45. Today’s SNL performers would never, ever get a reaction like this today.

Of all the traditional old-school fanboys with their seminal roots in the Star Wars glory period of A New Hope and The Empire Strikes Back (’77 to ’80), author-filmmaker Chris Gore is easily one of the most passionate and articulate. And probably the frankest. He’s emotionally invested in fanboy theology, but also circumspect. He hates crap.

The below video (dated 5.12.21) is titled “Why 99% Of [Mainstream] Movies Today Are Garbage.” The message is basically this: Within the corporate Hollywood skydome, progressive political narratives have become more important than delivering pure-enzyme entertainment. Straight-up, get-it-done fantasy transportation has been elbowed aside.

And let’s be honest — most neckbeard fanboys (though not necessarily Gore himself) have strongly resisted the political feminist current of the last several years — the Kathy Kennedy-mandated feminist assertion element in the Stars Wars franchise and spinoff flicks, in particular. Gore’s basic attitude seems to be (a) “Ripley, yes — Rey, not so much,” (b) “Where’s the necessary devotion to the avoidance of numbing cliches?”, and (c) “Where are the new George Lucas-level visionaries and the execs, like Alan Ladd Jr., who will stand by them?”

Gore transcript (portions rephrased or condensed): “What do the fans think of this stuff? Are they satisfying the fans? When I think of the theatrical experience, which is going away…and it is going away…you’d better entertain me, given the cost of moviegoing. And whether Hollywood notices it or not, people don’t really like politics woven into mainstream entertainment experiences.

“And [yet] we’re seeing that more and more. It’s unbelievable to me. They’re leaving money on the table by not giving the customers what they’re looking for.

“So in my mind there’s no excuse for big studio releases to fail. You have the best people in marketing. You have the most talented actors. Craftsmen when it comes to special effects and cinematography. Music. There’s no excuse for that stuff to fail. Here’s the problem, the conundrum. The marketing for these movies is so good, that the product doesn’t live up to the marketing. I got chills watching the trailers for The Rise of Skywalker. I was excited to see that movie…the ninth and final chapter in that saga. And I cannot believe how horribly it turned out.

“It’s malpractice…what happened to that franchise. And how it’s divided fandom, fighting over things that are really irrelevant. Not entirely irrelevant, but when you’re seeing people from within that company [Lucasfilm] attacking the fans? Outside of Kevin Feige, who might be past his prime, I can’t think of a studio executive who is a visionary these days. We really are losing that American identity [in big entertainments]. Because of China. Where is the movie that we all love without reservation? We could talk about other franchises that have lost their way. I’m afraid that we’re never going to see another George Lucas because everything has become so corporate.”

“[Sigourney Weaver‘s] Ripley was a great character, and not just a type that they were trying to shoehorn in. There’s a difference.”

HE comment: Gore asserts that one of the main reasons that The Empire Strikes Back is the greatest Star Wars film ever made is because it doesn’t blow anything up at the finale. HE has long maintained that Episode 5 is actually a film noir — an action-and-thrills chase film about losing + forebodings of dark destiny and in the end being badly beaten. A well-constructed, crackerjack flick in which the bad guys always have the upper hand and the good guys are constantly running and hiding and dodging laser bullets, and in the end they’re battered and bruised (minus a hand, carbon-frozen) with their asses totally kicked. The Empire Strikes Back is basically about “you can run but you can’t hide from the Empire…try as you might and brave as you might be, a happy ending is not in the cards for you guys…not this time.”