Variety‘s award-season columnist Clayton Davis tends to be very encouraging when it comes to assessing the Oscar odds of nearly every would-be Best Picture contender, at least in the early stages. He can be (and usually is) a very generous handicapper,

Which is why Davis may have delivered a symbolic kiss of death to Pablo Larrain‘s Spencer. Davis believes that Kristen Stewart‘s performance as Diana, Princess of Wales is good to go for Best Actress (at least a nomination) but the film itself…well, who knows?

Basic equation: If an obliging good-time Charlie is skeptical of a film’s Best Picture chances in September, there may be reason for concern down the road.

Barbra Streisand holds her end up in this final scene from The Way We Were, but it’s Robert Redford who delivers the emotion. It’s all in his eyes…the heartache, the buried regret, the faint unhappiness about his current gig as a live TV writer, the lingering love. It’s one of his most poignant acting moments ever, and I’m not even a huge fan of this 1973 film.

Pablo Larrain‘s Spencer ends on an “up” note — Diana, Princess of Wales (Kristen Stewart) and sons William and Harry escaping from the Windsor gargoyles in her car and singing Mike + the Mechanics’ “All I Need Is A Miracle,” which was released in early ’86. But here’s the thing…

Written by Mike Rutherford and Christopher Neil, “All I Need Is A Miracle” is about a guy who’s been indifferent and even abusive to his ex-girlfriend, but now he realizes what an asshole he was and desperately wants her back. If she decides to forgive him and return, it’ll be because God has smiled and lent a hand.

If you believe that a certain someone agreeing to be your boyfriend or girlfriend constitutes a miracle, you’ve got the wrong attitude, man — perhaps a low-self-esteem loser. If you’re a good person with character and inner value and whatnot, you shouldn’t need a miracle to make things right in terms or a desired relationship. Some guy saying “left to my own devices my would-be boyfriend or girlfriend might blow me off or find someone better, but if a ‘miracle’ happens I’ll be saved!”…c’mon, man.

I had the same attitude back in my hormonal heyday. If I was the object of some woman’s intense desire and if she believed that if I reciprocated her feelings that a “miracle” would be at hand, my response would be “hold on a minute…there’s nothing miraculous about me or being with me…I have my good and not-so-good qualities but if you think that our falling in love or moving in together or whatever…if you think that would be some kind of miracle, then you’re dreaming…nobody is a miracle, nobody’s a perfect catch…it could be a good or better-than-good relationship or not, but come down to earth….we’re all flawed, all struggling…nobody’s a gleaming prize.”

Clint Eastwood: “Show me a drop-dead beautiful woman with an elegant education and great business acumen, and I’ll show you a guy who’s tired of fucking her.”

Apologies for not posting about the death of Michael K. Williams during yesterday’s long journey. I feel genuine sorrow that the 54 year-old, Brooklyn-residing costar of The Wire and Boardwalk Empire accidentally took himself out. Respect and condolences. I’m just sorry — let’s let it go at that. 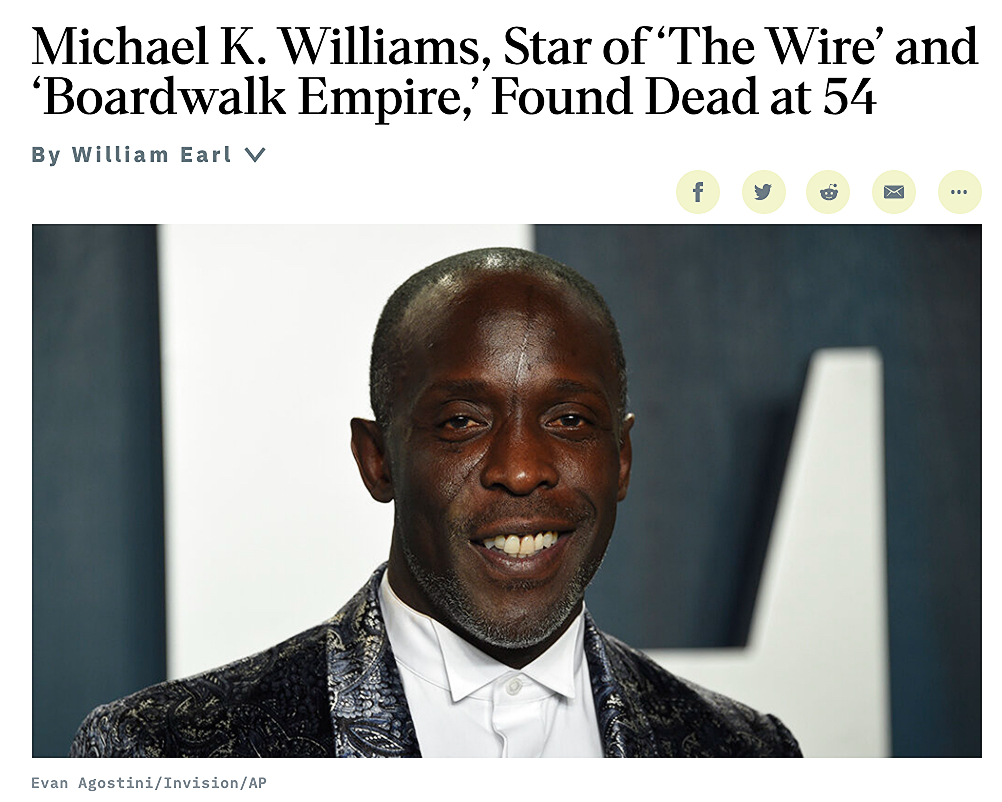 You’re sitting down and interviewing (or simply speaking with) a somewhat older and certainly more famous fellow than yourself, and as the conversation is winding down he affectionately, quickly, semi-aggressively grips your knee. That’s a gesture of courtly approval — it means that you’ve passed inspection.

I don’t know how many times this has happened to me personally, but I’d say a few. I’m thinking in particular of a 1999 Toronto Film Festival party for The Limey, and hanging for a half-hour or so with Terrence Stamp. As the party was ending and we were all starting to disengage, Stamp gave me a nice fatherly knee-grab — not too gentle, not too aggressive, right in the middle.

I can’t honestly say I’ve ever knee-gripped some younger guy. I tend to prefer shoulder grips or upper back pats.

Last Saturday afternoon I sat and wrote a bit at Telluride’s Butcher & Baker Cafe (201 Colorado Ave.). I consumed two cans of La Croix sparkling water, for which most retailers charge $2 each, give or take. The Butcher & Baker guys charged a total of $13.68. High rent and all that, but you’d think that an exorbitant per-can price would be more in the vicinity of $4 per can, not $5.50 or $5.75.

Due to pressing work issues and whatnot, Tatiana insisted Monday morning that we drive all the way from Telluride to West Hollywood (858 miles, 13.5 hours) in a single daylight-to-darkness marathon. We left at 11:30 am and arrived at the WeHo homestead around midnight, or 1 am Telluride time. Two (or was it three?) gas-ups. No meals or leg-stretching time-outs. The worst part was the endless uphill trek between Needles and Barstow.

Most long-distance drivers succumb to acute exhaustion after seven or eight hours. Tatiana drove the first seven; I took over in mid-Arizona. Any way you slice it 13 and 1/2 hours inside a VW Beetle at 80 mph is grueling.

I’ve been through one similar experience — a coast-to-coast, Los Angeles-to-NYC marathon that lasted 52 hours. Meals and one roadside snooze but no motels. The fastest potential time is 42 hours, but the pace would be inhuman. The most agreeable way to drive long distances is to bag 400 to 500 miles per day. Less if you can afford it and have the spare tine.

The difference is that Branagh seems afraid of turning off the cinematic low-brows with a sudden plunge into monochrome, so he begins his 1969 tale in the glorious digital present, showing Belfast’s brilliant colors and upgraded commercial center, all spiffy and rockin’ to some punchy tune.

Only after the audience has been sated with the colorful safety of now for two full minutes does Branagh summon the resolve to commit to black-and-white and the Belfast that once was.

Cuaron, of course, started his film in monochrome from the get-go and stayed with it.

Initially written during Monday’s 858–mile marathon, re–edited and tweaked in West Hollywood on Tuesday morning: On Sunday night (9.5) I finally caught Wes Anderson’s The French Dispatch, and there’s no question that it’s brilliant and (I mean this respectfully) oddly hateful in a chilly sort of way.

Pretty much all of your sharper, tougher Telluride critics have problems with Kenneth Branagh’s Belfast. The more obliging middle-of-the-road types (critics, columnists and industry folk alike) have oddly fallen for it.

You can’t grab people by the lapels and order them to have a sense of taste about such matters. If someone likes Belfast or finds it Oscar-worthy, okay — shrug and throw your hands up. But when someone says Belfast is “one of the best films [they’ve] ever seen,” all kinds of crazy reactions come to mind. Because it’s fair, I believe, to compare Belfast’s family dynamic with that of Fred Savage and The Wonder Years, as IndieWire’s David Ehrlich did today.

Either you’re the type who can tolerate or, God forbid, embrace cloying emotionalism, or you aren’t..

From a 9.5 Deadline column by Pete Hammond:

Jean-Paul Belmondo has passed at age 88. No strenuous sorrows as he persevered for nearly nine decades, and lived a much fuller and more colorful life than the norm.

Belmondo’s career was launched by his starring role in Jean-Luc Godard‘s Breathless (’60). How good is that 61-year-old film, really? I would say more “fleetingly iconic” than great. The adoration that Belmondo’s character, Michel, felt for the tough-guy manner of Humphrey Bogart — that’s what sticks in the mind. Particularly his Bogartian facial expressions as he lies dying on a street in Paris. Right before he’s shot, Michel says “I’m tired…I want to sleep.” An odd sentiment at such a young age — a natural or not unexpected thing to say at age 88.