As one who knew and even hung a couple of times with Leon Vitali, the former actor and devoted Stanley Kubrick associate throughout the ’70s, 80s and’ 90s, and as one who badgered him a few times during the Barry Lyndon aspect-ratio brouhaha of 2011, I’m very sorry to hear that he’s passed.

Leon was a fine fellow and a true believer. He understood hardcore devotion as well as anyone I’ve ever known in this racket has.

Longtime HE readers will recall the Barry Lyndon aspect ratio contretemps, which ranged between 5.23.11 and 6.21.11. Retained by Warner Home Video as a technical consultant on a spate of Kubrick Blurays, Vitali insisted that the WHV Lyndon Bluray be issued at 1.77:1 rather than 1.66:1, an a.r. previously adopted when WHV released the 1975 classic on laser disc.

I hit the roof when I read about this. I argued, howled, seethed.

Then Glenn Kenny posted a 12.8.75 “smoking gun” letter, leaked by Jay Cocks and written by Kubrick and sent to U.S. exhibitors. It stated that Barry Lyndon had been shot in 1.66 and should ideally be projected this way.

The Lyndon debate was of the most bitterly fought and not incidentally triumphant a.r. battles in Hollywood Elsewhere history, the other being the Shane a.r. battle of 2013. 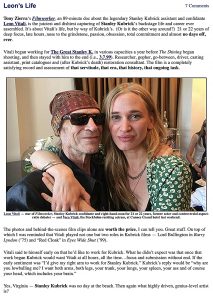 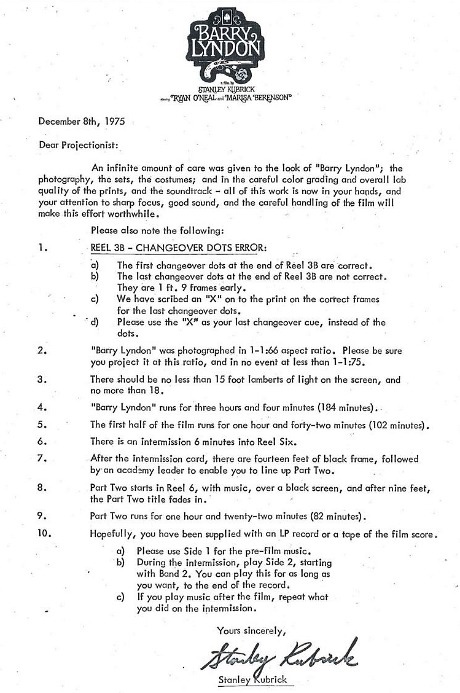 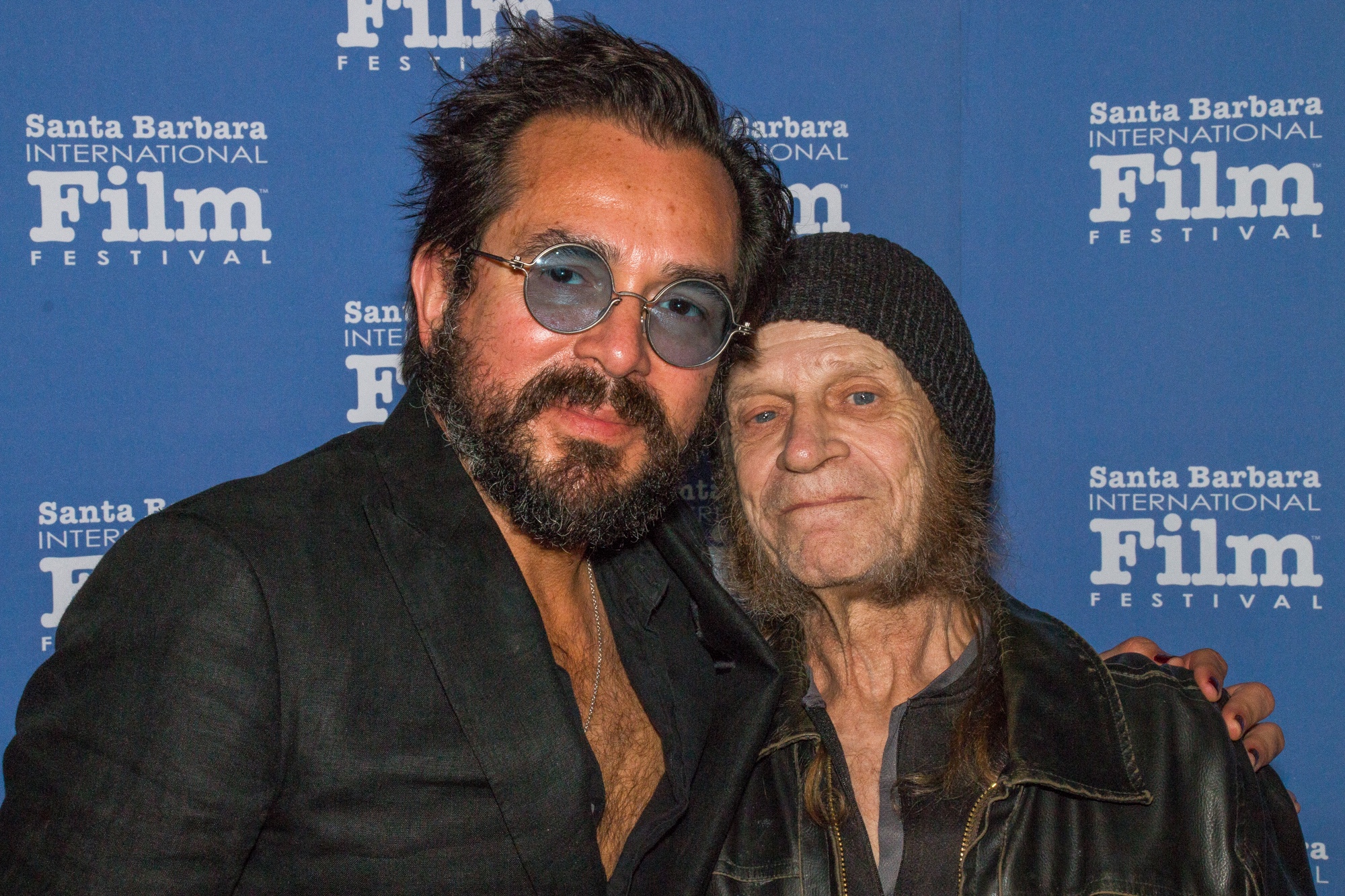 I hate the way CBS Sunday Morning sells soothing little fairy tales about famous people who are wealthy and happy and blah blah. Married for 40 years, Pat Benatar and Neil Giraldo may well be in a good place together…enjoying a fine, fulfilling relationship. But watching this piece made me frown and recoil. I don’t believe anything I watch on CBS Sunday Morning, even if it’s true. Because the idea is always to soothe, which is to say narcotize.

14 Comments
Kids Are Up To Something

It took me a few months to catch up with Eskil Vogt‘s The Innocents. I finally streamed it last night, and wow…easily one of the most unusual and strikingly rendered creep-out films I’ve ever seen. A series of eerie, first-rate jolts that accumulate into a feeling of being sucked in and tied down. And yet a film that leads to a moral reckoning.

It definitely ranks alongside The Witch and The Babadook and films of that ilk, films aimed well above the heads of your average horror-loving sloths who prefer the usual formulaic slasher crap. I’m not, however, calling it a slice of elevated horror because Vogt, who also co-wrote the screenplay of Joachim Trier‘s The Worst Person in the World, never allows the film to step into flat-out psycho screamville. But he certainly gives you the willies.

And I loved the fact that The Innocents focuses entirely on four pre-pubescent children living in a high-rise Oslo apartment complex, and what they’re seeing, feeling, channelling and manipulating by way of ESP, mind-reading and telekinesis, and how their parents never realize what’s actually going on. Start to finish the parents don’t have clue #1.

It’s about one of these kids (Sam Ashraf‘s Ben, a ten-year-old of Indian descent who lives with his single mom) having discovered the ability to move small objects via telekinesis, and Ben revealing this gift to Ida (Rakel Lenora Flottum), a quietly observant lass of relatively few words (or certainly when her mom and dad are around) who seems around eight years old. Ida has an older sister, Anna (Alva Brynsmo Ramstad), who’s suffering from non-verbal austism, and yet once Ben allows them to marvel at his special abilities Ida and Anna start to acquire a vague form of ESP and mind-reading on their own.

Soon added to this equation is Aisha (Mina Yasmin Bremseth Asheim), an eight-year-old neighbor with vitiligo who intuitively “reads” Anna, who in turn gradually starts to communicate and even talk as she picks up on the tremor-like powers of the vaguely weird Ben.

Alas, Ben soon reveals himself to be a demonic little sadist who doesn’t blink an eye as he drops Aisha’s cat from a high stairwell, and then crushes the poor thing’s head. And that’s just the beginning of the killings. I won’t reveal Ben’s other victims, but I did find fault in the matter of a certain adult who winds up dead on a kitchen floor. Ben is no dummy, and he surely understands that dead bodies have to be buried or burnt or they’ll stink the place up. I don’t know why Ben (i.e., Vogt) doesn’t attend to this basic no–brainer situation.

Telekinesis, thought transference…you can sense early on that increasing weirdness is right around the corner, and that Ben will eventually turn into a version of that little Twilight Zone shit from 60 years ago who flatlined people he didn’t like and turned one alcoholic neighbor into a jack-in-the-box and then buried him 50 feet under a cornfield.

This is a very effective, highly original, low-key children’s tale that puts the hook in (it actually feels like a kind of serum) and never lets up.

Ben and his mom, of course, are immigrants of color (ditto Aisha and her mom). If and when The Innocents is remade for American audiences there’s no way the evil Ben character will be played by a young actor of color, and certainly not by a kid of African-American descent. Non-white actors of whatever age cannot play demonic killers. Okay, it’s possible, I suppose, but highly unlikely.

The Innocents premiered in Cannes under the Un Certain Regard program, but I wasn’t there. Nor was I at Austin’s Fantastic Fest when it showed there in September ’21. IFC picked it up but did the film no favors by labelling it as an IFC Midnight thing, which suggests it’s a genre film aimed at low-rent horror fans. It’s much better than that — it’s an elegant, odd little spooker that could have been a Jack Clayton or Roman Polanski film in the mid ’60s. 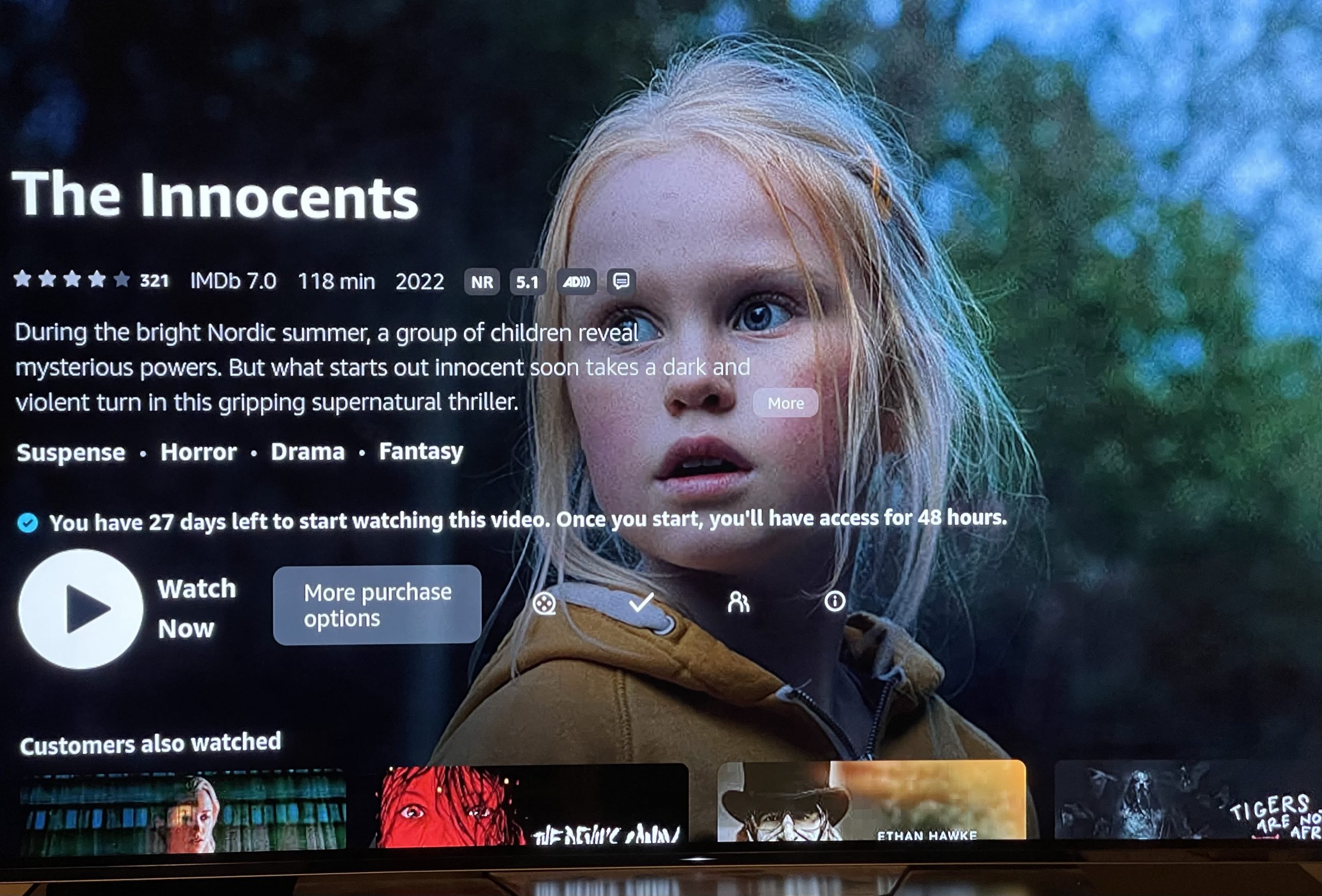 Son of Most Idiotic Battle Scene Ever
[Originally posted on 12.28.14]: "In my 80% positive 11.12 review of Clint Eastwood's American Sniper I mentioned a scene that I found hugely irritating. And still do, having seen the film twice now.

Recognize These Words
...as a neat capturing of the mass derangement syndrome that has permeated progressive coastal culture over the last five years or so:

In my 7.20.22 review of Nope, I wrote about the difficulty of understanding Daniel Kaluuya: “As Eddie Murphy might say if he catches Nope, ‘I don’t what the fuck this guy is sayin’.’ Remember Murphy’s imitation of James Brown with those scat riffs? That’s how Kaluuya sounds. I understood him maybe 20% of the time, if that.”

I’d forgotten that I said the same thing in my 6.9.15 review of Sicario: “Emily Blunt’s partner is played by Daniel Kaluuya, and I’m telling you here and now and forever I didn’t understand a single phrase from this guy. It was like he was speaking Farsi. Seriously, dub his ass for the U.S. release.”

Excerpted from that same review, which was titled “Su-Su-Sicario…Nope, Phil Collins Disapproves“:

“Sicario is basically about heavily militarized, inter-agency U.S. forces hunting down and shooting it out with the Mexican drug-cartel bad guys, and at other times flying here and there in a private jet and driving around in a parade of big black SUVs and so on….zzzzzz.

“It’s a strong welcome-to-hell piece, I’ll give it that, but Sicario doesn’t come close to the multi-layered, piled-on impact of Steven Soderbergh‘s Traffic, portions of which dealt with more or less the same realm.

“The tale, such as it is, is told from the perspective of Emily Blunt‘s FBI field agent, who, being a 21st Century woman who’s in touch with her emotions, is of course stunned and devastated by the unrelenting carnage blah blah.

“You know what I’d like to see just once? A female FBI agent who isn’t in touch with her emotions, or at least one who tones it down when it comes to showing them. Too much to ask for, right?

“One of her battle-hardened colleagues, a senior veteran with a semi-casual ‘whatever works, bring it on’ attitude, is played by the ever-reliable Josh Brolin.

“My favorite character by far was Benicio del Toro’s Alejandro, a shadowy Mexican operative with burning eyes and his own kind of existential attitude about things. Benicio the sly serpent…the shaman with the drooping eyelids…the slurring, purring, south-of-the-border vibe guy.