This Boyish Trump Normalizer Is A Bad Fellow, Ethically Speaking — The Highest-Rated TV Star To Have Partially Enabled Governmental Evil Since Bob Hope

Jimmy Fallon, who will emcee tomorrow night’s Golden Globes award telecast, will be on Hollywood Elsewhere’s shit list for the foreseeable future (forever?), and I’ve mentioned him in this context so many times I don’t think I need to explain it again. 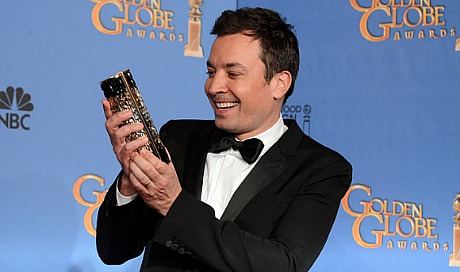 “[Perhaps] you already know what to expect [tomorrow night]: a star-studded opening number with ambitious tracking shots, singing, dancing, costumes, impressions, fawning odes to the nominees, silly audience play, and scattershot jokes in which the punch lines are never more than gentle pokes.

“This instinct is coded inside Fallon’s DNA. He’s the host of NBC’s The Tonight Show. He’s the ratings leader. He’s a television star in his own right. But more than anything, he is Hollywood’s No. 1 fan, a man-boy saddled with a pop culture obsession who believes life is a karaoke machine inside a frat house where everything is awesome and everyone plays board games before pounding back midnight shots from the fountain of youth and declaring mad love for one another.

“In this cloud of arrested development, Fallon is the affable ringleader. He hugs. He high-fives. He giggles. He claps like a trained seal. He never offends.

“His interview with Donald Trump in September was the most mocked late-night segment of 2016. The low-point for most critics was when Fallon tousled Trump’s hair, which was widely described as ‘normalizing’ a political candidate who kept saying and doing things that were wildly abnormal.

“The bigger problem, as usual, was Fallon’s separation from reality.

“His questions — ‘Did you always see yourself getting into politics?’, ‘Have you ever played the board game Sorry?’, ‘How do you not get sick from shaking all those hands?’ — sounded like a first grader interviewing Mayor McCheese.

“You got the impression that if extraterrestrials ever conquered Earth and Fallon landed a sit-down with our new alien leader, he’d spend the entire time asking about beer pong in zero gravity before jangling the overlord’s antennae and encouraging a duet of Styx’s ‘Come Sail Away.'”

January 7, 2017by Jeffrey Wells46 Comments
« Previous post
Good Times, Substandard Photos
Next post »
Legendary Formosa Cafe, Where I Used to Get Half-Bombed on Jack Daniels and Ginger Ale, Is Dead