Tina Fey, Amy Poehler opening remarks (2:55): “The Golden Globes are given out by the Hollywood Foreign Press Association…made up of around 90 international, non-Black journalists who attend movie junkets each year in search of a better life.” (4:38) “Nomadland is about a lady played by Frances McDomand who travels across the desert in her van and poops in a bucket.” (5:46) “Soul is a beautiful Pixar animated movie in which a middle-aged black man accidentally get knocked out of his body and into a cat. The HFPA really responded to this movie because they do have five cat members.”

6:10 pm: HE is unable to invest any interest in animation, but respectfully believes that the HFPA giving a Golden Globe in this category to Pete Docter‘s Soul in an odd call. Posted on 11.29.20: “Despite an absolute avalanche of charm and energy and whimsical, wild-ass associations, Soul is just not good enough. Too fast and busy, too scattered, too all over the place, too hyper. And because it pushes a fundamentally false or at least conflicted concept of life. And because (this is minor but significant) it tries to normalize obesity with the casting of the fattest animated cat you’ve ever seen in your life.” 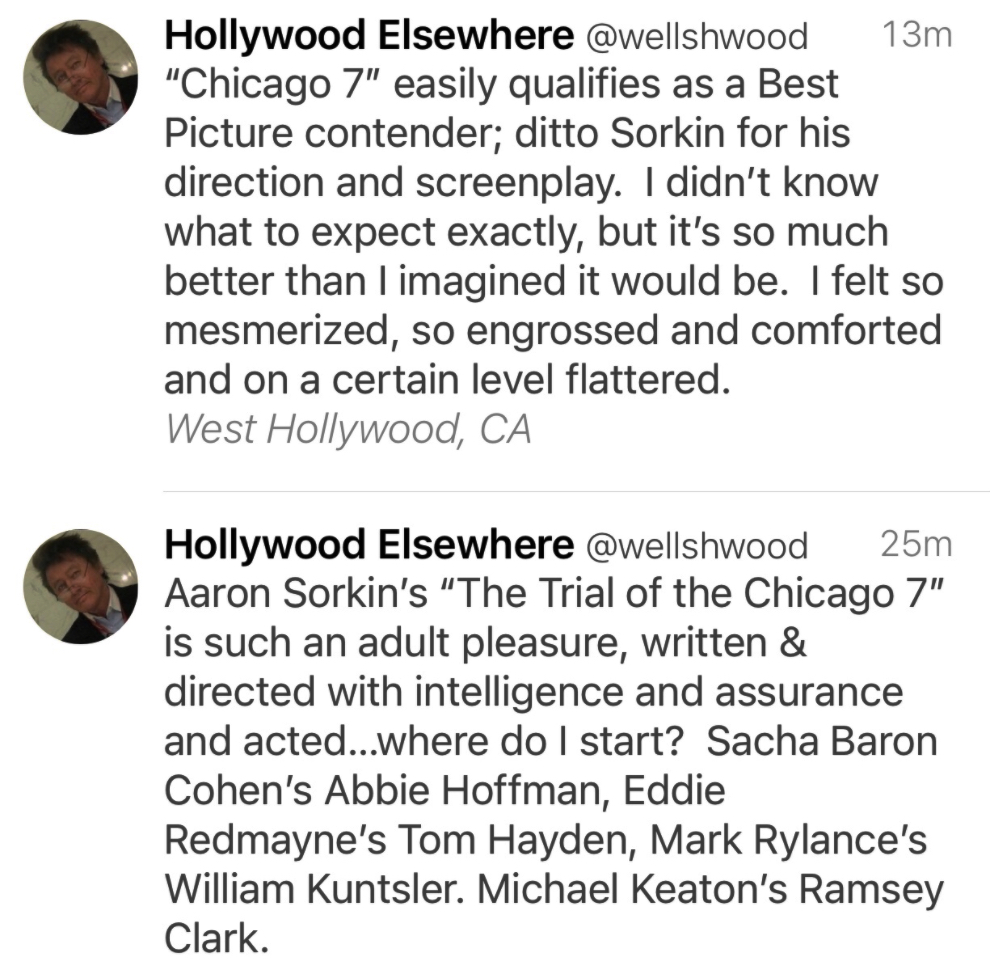 7:15 pm: Congrats to Minari for winning the Best Foreign Language Feature Golden Globe award. The only problem is that it’s not really a foreign-language feature. It’s a totally American film, set in the Midwestern heartland and featuring a scene in an American small-town church and costarring a Jesus freak (played by Will Patton). It happens to focus, yes, on characters who happen to speak Korean because that’s their native language. But it’s not a foreign-language film. Not in the usual sense.

7:45 pm: Congrats to The Mauritanian‘s Jodie Foster winning a GG for Best Supporting Actress, but where did this come from? And why, again, was Mank‘s Amanda Seyfried shafted? The Father‘s Olivia Colman gave the most compelling performance in this category, but she didn’t win because she won the Best Actress Oscar two years ago for The Favorite…right? Zip for Hillbilly Elegy‘s Glenn Close. I just don’t get (and I don’t “mean” anything by this) where the Foster vote came from. What drove it? Where was the big rationale? 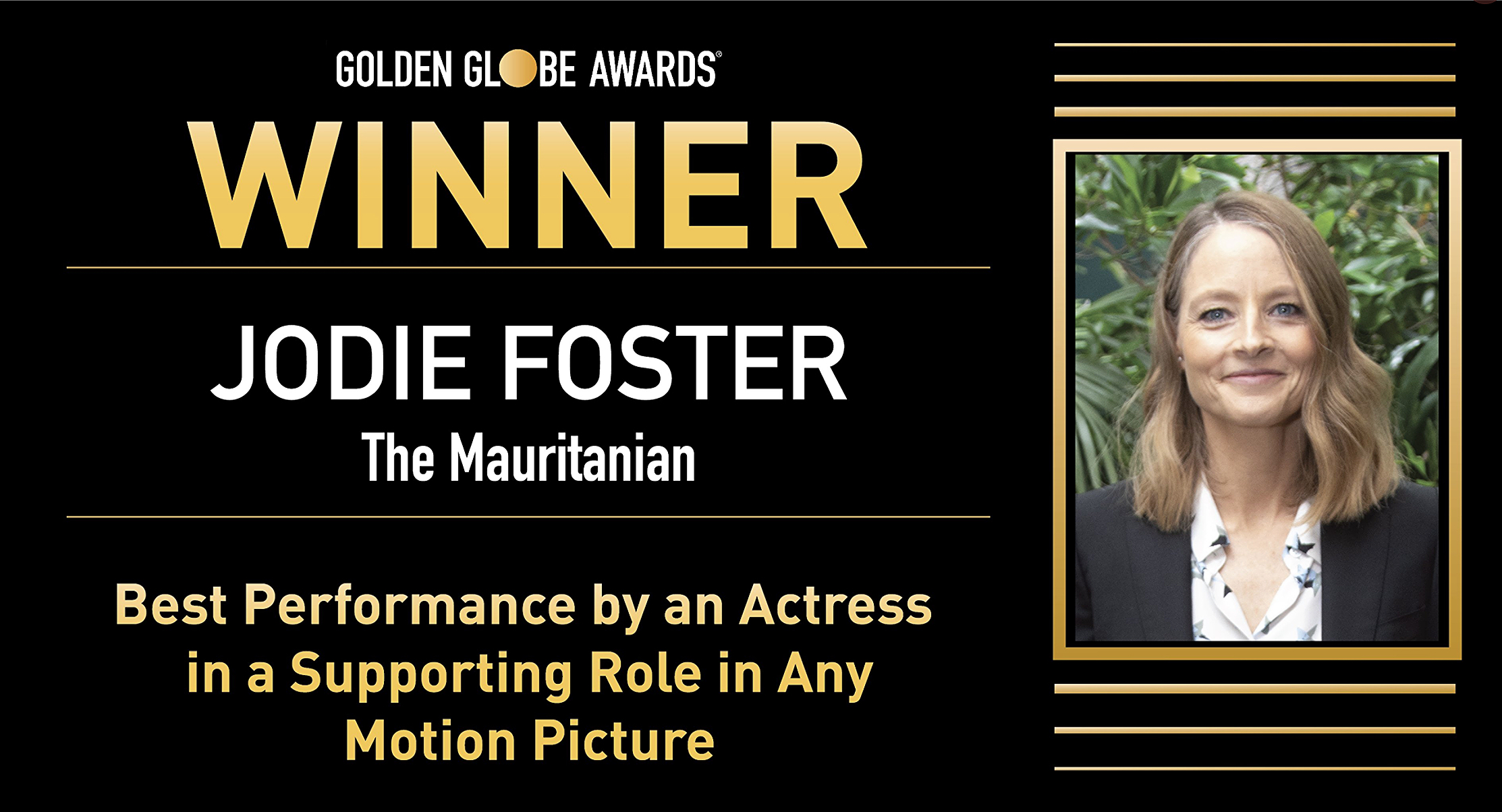 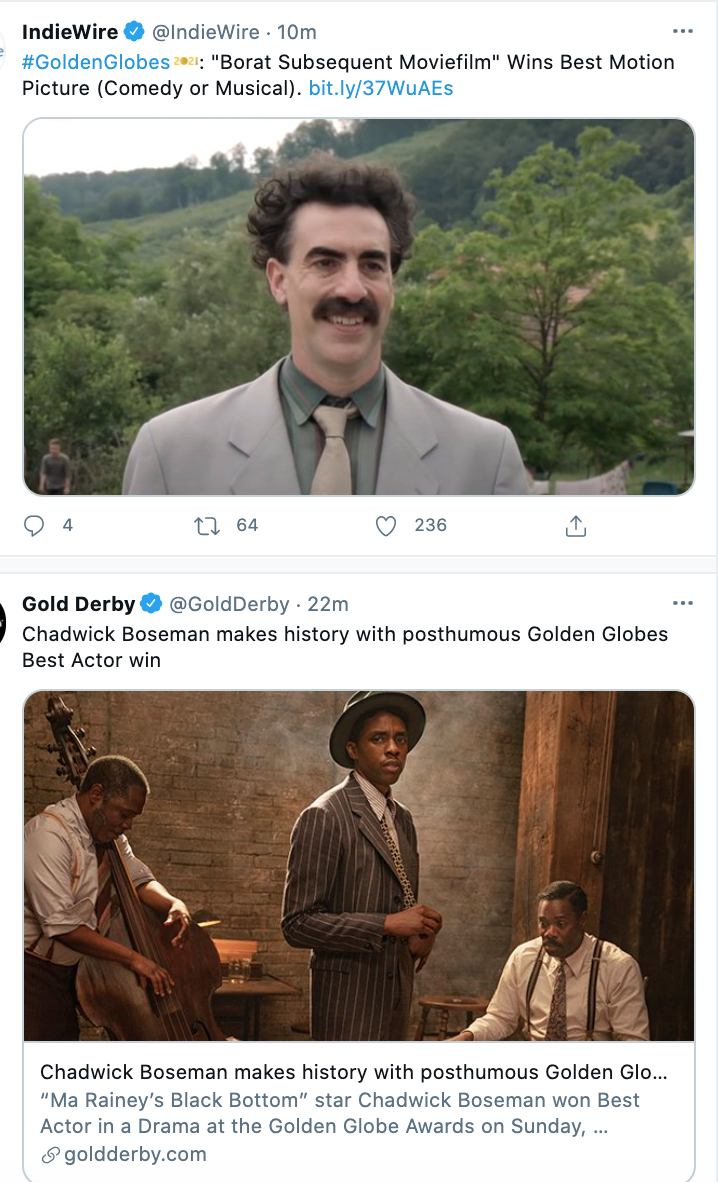 Andra Day delivered an excellent performance in The United States vs. Billie Holiday — no question about that. But what she brought was significantly better than the film itself. Usually the film has to be well-liked or at least well-respected for a major category acting win to happen — not this year. You have to admit that Day winning is a surprise.

The bottom line is that HFPA members are seemingly terrified about possibly getting canceled or blackballed by the woke crowd. Hence the Boseman win (pure sentimental tribute trophy) + Kaluuya (I honestly feel that Sacha Baron Cohen really nailed Sorkin’s enhanced version of Abbie Hoffman, and I could’ve accepted a win for Leslie Odom Jr. as Sam Cooke in One Night in Miami) + Minari.

HFPA to Hollywood community (per friendo): “Just because we are an all-white voting body does not mean we are not woke. We get it. Please understand this. Because we do.”

Friendo: “Oscar-wise it’s Nomadland vs The Trial of the Chicago 7 for Best Picture. I think Boseman will probably win the Oscar for that goofy performance.”