During last night’s SNL “Weekend Update” segment, Colin Jost fairly and appropriately upbraided Sen. Al Franken for crude, intrusive behavior with Leeann Tweeden during that 2006 USO episode. Displaying that ubiquitous fratboy photo of Franken pretending to grab Tweeden’s breasts, Jost noted that the pic “was taken before Franken ran for public office, but it was also taken after he was a sophomore in high school…it’s pretty hard to be like ‘Oh, come on, he didn’t know any better, he was only 55.’”

But SNL‘s decision to include Franken, a single-incident offender, in a group shot with serial predators Bill Cosby, Roy Moore, Louis C.K., Donald Trump and Harvey Weinstein was odious, tabloid-level smearing of the lowest order. SNL management was presumably fearful of being accused of going soft on an ex-colleague (Franken having worked for SNL for 15 years), but in this instance they grossly over-compensated. 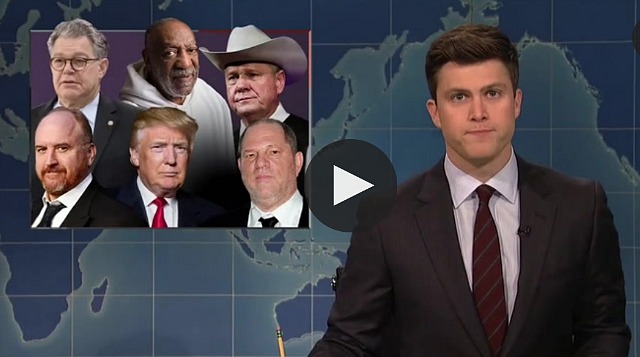