Owen Wilson and I go back to the summer of ’94, which is when he and Wes Anderson moved to Los Angeles. We were never friends, but the term “good acquaintances” definitely applied. Our relationship was agreeably in and out throughout the mid to late ’90s. Owen and I haven’t shared face-time since a random run-in in San Francisco 14 years ago (he was with Kate Hudson at a North Beach cafe), but I regard him as a good fellow with all kinds of fascinating impulses, side-pocket shots and clear-light moments.

So I was naturally intrigued by Isaac Butler‘s “The Many Contradictions of Owen Wilson” (Slate, 6.16), which focuses on Wilson’s Mobius M. Mobius character in Loki, the Disney+ series, and mentions Bliss, the bizarre cyber-dreamscape thing with Salma Hayek. Here’s an excerpt: 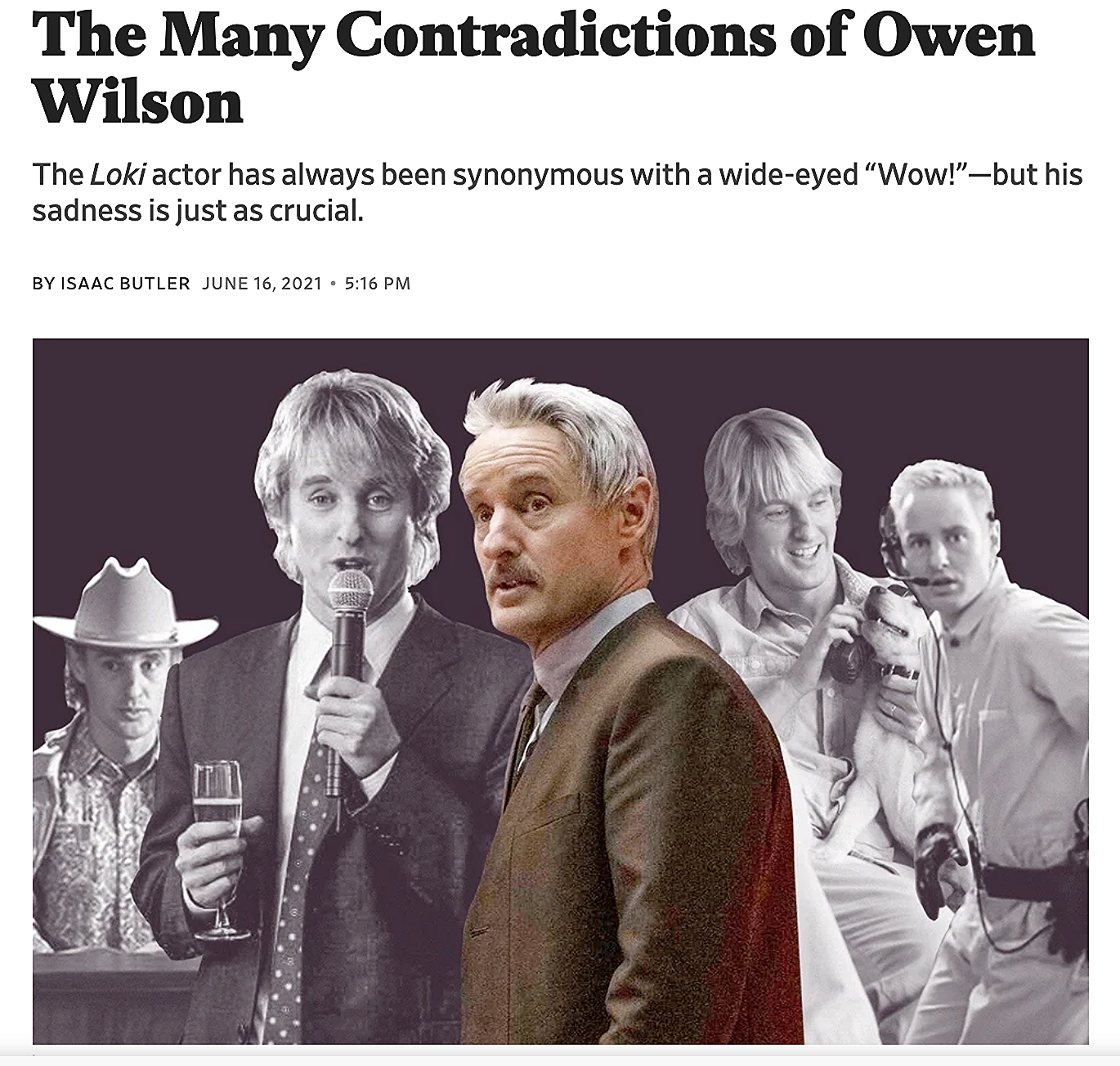 “Wilson’s careful deployment of his inherent sadness has always been a sign that he’s a far more interesting, intelligent, and idiosyncratic actor than he is usually credited for being. Some of our underestimation of him is his own fault — he’s only made a small handful of good films and is too often happy to glide by on his natural, laid-back charisma. But there is a thing Wilson can do better than almost any other actor alive: embody an eccentric, wide-eyed innocence, and then find underneath it a knowing darkness.

“A gleeful embrace of absurdity is key to Wilson’s performances, reinforced by his soft Texan drawl, eyes that seem lit by their own flame, and habit of declaring things to be ‘crazier than a road lizard.’ His affable charm can make it easy to overlook how much detail and nuance he brings to his performances when he cares to.

“Like Robert Redford before him, Wilson at his best is a minimalist. His gestures are simple, compact, and he only moves when necessary. His face is exactly as expressive as it needs to be so you can track what his characters are thinking and feeling, but no more. Instead of trying to transcend the limitations of his limited vocal range, he’s embraced them to such an extent that he appears to have found a thousand ways to say the word wow.”

HE jotting from 8.29.07: “Owen is far too complex and interesting and whimsical to be a leading man. He’s a flaky poet dreamer, a brilliant space-case…a witty intellectual adolescent whom women might find charming for a night or two, but he’s the very antithesis of a Clark Gable oak tree. He’s the kind of guy women can spot in a second as undependable because his basic nature is to go wherever his whims or dreams or ambitions may lead at a given moment. His true inner whatever has always been hidden, and he doesn’t wear his passion on his sleeve.

“He’s Dignan, he’s Dupree in front of that classroom full of kids, he’s that Wedding Crashers guy, he’s that plucky oddball friend of Jackie Chan‘s. But he’s never carried a film on his own shoulders. Look at what happened with Behind Enemy Lines, Minus Man, The Big Bounce. Owen is partner material, but the partner stuff that has happened so far is golden. He and Vince Vaughn could be the Hope-Crosby of our time if they wanted to — I would go to see Vaughn-Wilson movies for the rest of my life. And the routines he’s done with Ben Stiller in various films and on the Oscar show have been classic.

“Tragedy and comedy are the twin faces of a very thin dime, and Owen’s sense of humor — which was always dry and sardonic and even fatalistic at times — can only broaden and deepen as he goes along.” 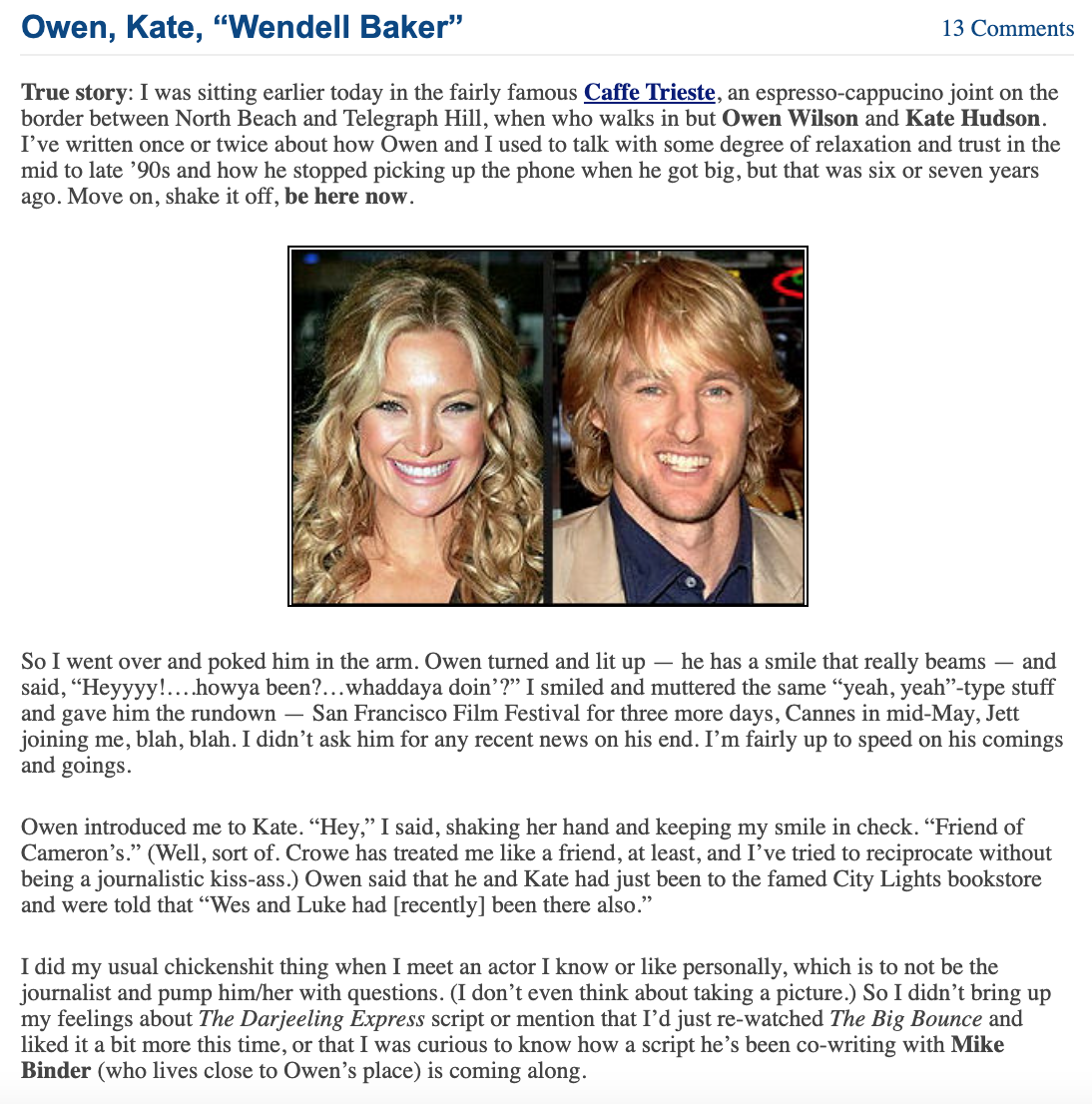 “A True Original,” posted on 7.9.06: “By my own selective definition of the term, Owen Wilson is a bona fide movie star. He’s an entertaining, obviously talented actor who delivers the same personality and attitude — in film after film he plays the exact same spiritual-flotation-device spacehead — and he’s always good at it, and I’ve never tired of it and I doubt if anyone else has either.

“Wilson tends to play irresponsible immature flakes, and there’s a built-in limit in playing such characters, but there is no other actor on the Hollywood landscape whose dialogue (large portions of which Wilson always seems to write or improvise himself) is focused so earnestly and consistently on matters of attitude and heart. Pretentious as it may sound, Wilson is an actor with a consistently alive and pulsing inner-ness. Is there any other actor who even flirts with this realm?”