Moses Doubles Down: “Enough Is Enough”

Even the semi-informed have known for some time that Moses Farrow, the adopted son of Woody Allen and Mia Farrow, has been dismissive of sister Dylan Farrow‘s claim about Woody having molested her in August 1992, and also disparaging of Mia for having been a highly intimidating control freak when he and his siblings were young.

Today Moses reiterated these views in a self-published essay titled “A Son Speaks Out.” He again questioned Dylan, defended his father, and claimed his mother was abusive towards him and his siblings. 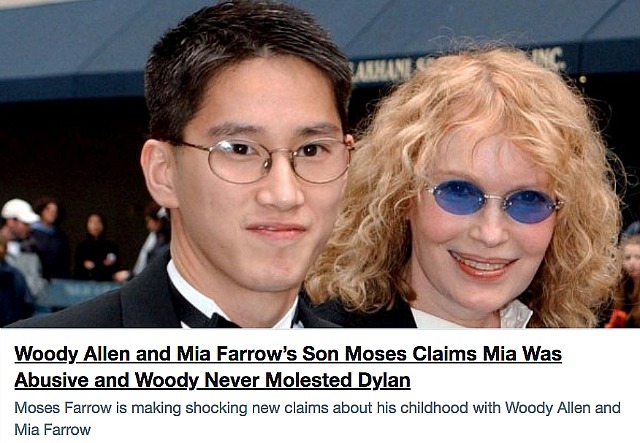 Near the end of Moses’ essay: “To those who have become convinced of my father’s guilt, I ask you to consider this: In this time of #MeToo, when so many movie heavyweights have faced dozens of accusations, my father has been accused of wrongdoing only once, by an enraged ex-partner during contentious custody negotiations. During almost 60 years in the public eye, not one other person has come forward to accuse him of even behaving badly on a date, or acting inappropriately in any professional situation, let alone molesting a child.

“As a trained professional, I know that child molestation is a compulsive sickness and deviation that demands repetition. Dylan was alone with Woody in his apartment countless times over the years without a hint of impropriety, yet some would have you believe that at the age of 56, he suddenly decided to become a child molester in a house full of hostile people ordered to watch him like a hawk.

“To the actors who have worked with my father and have voiced regret for doing so: You have rushed to join the chorus of condemnation based on a discredited accusation for fear of not being on the ‘right’ side of a major social movement.” Are you listening, Timothy Chalamet and Greta Gerwig?

“But rather than accept the hysteria of Twitter mobs, mindlessly repeating a story examined and discredited 25 years ago, please consider what I have to say. After all, I was there — in the house, in the room — and I know both my father and mother and what each is capable of a whole lot better than you.”

Dylan has called the essay “an attempt to deflect from a credible allegation made by an adult woman, by trying to impugn my mother who has only ever been supportive of me and my siblings.”