Sucker That I Am
Last night I bought the new “Revolver” remix, but only the album itself and not the expanded outtake version that cost $34 or thereabouts.

My Policeman (Amazon Prime, 11.4) is a tepid and morose gay tragedy, set in late 1950s England. And Harry Styles‘ rote performance as Tom Burgess, a sexually repressed gay policeman, is not a burnisher. Ditto David Dawson‘s as Patrick Hazlewood, a museum curator who becomes Tom’s lover and a rival for his affections in the matter of Emma Corrin‘s prim and proper Marion, who Tom marries because he needs a beard, which is a shitty thing to do.

But Marion evens the score down the road. Shittily, I mean.

Give Styles credit for bravely and energetically committing to some fairly graphic sex scenes with Hazlewood (kiss-slurping, panting, blowing, ass-fucking) but as I said in an earlier post, Styles is hot but Hazlewood isn’t, or at least not hot enough for me.

There are some pretty guys whom straight guys can at least imagine having some kind of vague intimate contact with. Mick Jagger in Performance was one. In True Romance Christian Slater‘s Clarence Worley says that he could’ve fucked the young Elvis Presley. But one look at Hazlewood and I went “nope.” Cold eyes, dorky haircut, emotionally needy and greedy.

I had a good laugh, however, when Dawson/Hazlewood hooks up with some anonymous guy and they decide to get down in an alleyway. They’re busted by a pair of bobbies before anything happens, but just before Dawson is about to drop to his knees the recipient drops a magazine on the damp pavement so Dawson won’t chafe his knees and his trousers won’t get wet. Thoughtful.

To be perfectly honest, My Policeman struck me as a stacked deck — basically a gay agenda film by way of an indictment of straight British society and the cruel repressions of the immediate post-war era.

It basically says that while being gay in 1957 Brighton was often a lonely and miserable thing, it was infinitely preferable to holding down a dull civil service job (Styles is a bobbie) while enduring a dull and regimented married life with a woman you don’t love and don’t really want to fuck either (the sex scenes between Styles and Corrin are grim and sad). And it absolutely revels in the joys of gay sex, over and over. Oh, the rapture, the ecstasy and the muscle tone!

It’s based on a year-old, same-titled book by Bethan Roberts. The Amazon copy reports that Roberts “reimagined the real-life relationship that the novelist E. M. Forster had with a policeman, Bob Buckingham, and his wife.”

Well, if it was good enough for Forster…

I was ready and willing to be engaged and transported, but less than five minutes in I was muttering “oh, shit” to myself. I knew this ploddingly pedestrian, dull-as-dishwater drama would be trouble during the opening credits, in fact. I can always smell trouble coming ‘round the bend.

While most of My Policeman is set in ’57 and ’58, about 35% or 40% is set in the late ’90s when Styles, Dawson and Corrin’s characters are in their mid to late 60s. They’re played, respectively, by Linus Roche, Rupert Everett and Gina McKee.

Honestly? McKee, who plays the least obliging and most clueless character, struck me as the most appealing. Her manner is gentle, her eyes are kind and she has a nice smile. Plus she doesn’t push it.

I was sitting in the third row in a nearly vacant theatre (two older women were sitting 10 or 12 rows behind me), and so I decided to keep my phone on and text my reactions to a friend as the film went along. Just watching it would have been unbearable. I had to fight back with my fingers and thoughts. Here are some of them:

“The older guy who’s had the stroke (Everett) doesn’t look like either Styles or Dawson so who is he? Okay, fuck it — I’ll look it up on Wikipedia. 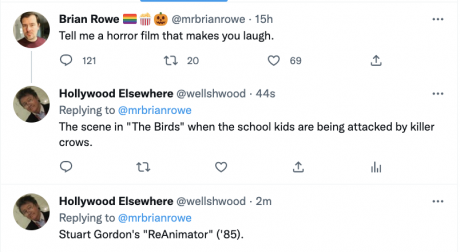 And an industry friendo agrees with Scott Mantz: “First half lame. Second half launches.” 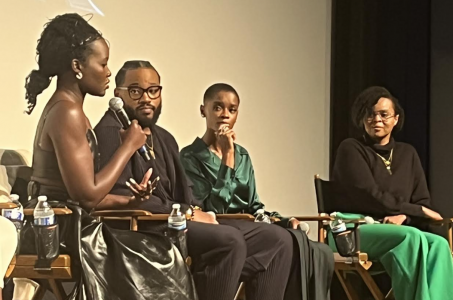 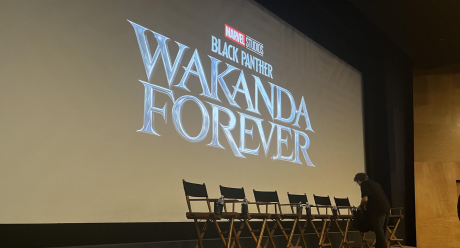 Oh, God…This Must Be Garbage
The title alone, Savage Salvation**, tells you everything. The fact that problematic producer Randall Emmett directed is a problem upon a problem.

10 Comments
Camel In The Tent Pissing Out

…is better than outside the tent pissing in.

Posted on 4.25.15: An assortment of Los Angeles-based film bloggers and print journalists are presently enjoying a gratis, all-expenses-paid visit to the 2015 Riviera Maya Film Festival. The seven-day event is based in Playa del Carmen, the Yucatan beach town 30 miles south of Cancun and 200 miles north of Belize City.

I tried to offer my…uhm, “promotional” services to Sunshine Sachs publicist Brooke Blumberg, who did the inviting, but she decided to invite every name-brand columnist in town (Sasha Stone, David Poland, Scott Feinberg, et. al.) except me…thanks!

Brooke apparently doesn’t like me or suspects I’d be more trouble than I’m worth or something along these lines. Not true! I am perfectly willing to shill for any film festival that will fly me there and put me up, etc. I write really well and can give the same kind of handjobs that other journalists give when they visit places for free.

This morning I got a message from Stone, who’s down there now and staying at the Hotel Platinum Yucatan Princess, which offers the exact same kind of luxurious decor and feelings of well-tended splendor offered by every other luxury hotel in the world. (I stayed in a place almost precisely like this in Hoi An, Vietnam in 2013.)

May I ask something? What is the point of travelling to an exotic location if you’re going to stay in a place that’s a carbon-copy duplicate of every other luxury habitat around the world? It’s the Club Med approach to travel…the Kardashian way. Has anyone read Conde Nast Traveller lately? With slight variations every luxury hotel in the world looks exactly the same.

The body snatchers have branched out — they’re now designing hotels.

Jerry Lee Lewis in Heaven
Now that he's gone, I don't know what to say about Jerry Lee Lewis (aka "the Killer") that hasn't been said. He was a great, thundering rock 'n' roll legend if there ever was one...a madman in his youth, and a truly magnificent performer every time he sat down to play piano. It's remarkable that a guy who drank and caroused and burned the candle at both ends in the '50s and '60s lasted as long as he did...87 years.

I’ve been through the heartbreak of losing cats to disease and cruel fates (a beloved Siamese named Mouse died from pancreatic cancer in ’01, and two others, Ricci and Mouse 2, were run over by careless drivers) and I’m truly, deeply sorry for what recently happened with Sasha Stone‘s poor unfortunate cat.

But while my reaction to The Banshees of Inisherin may have bled into the sad passing of Sasha’s pet (and I’ve felt these sadnesses in my own life, trust me), it actually had nothing to do with it. Martin McDonagh‘s film is its own realm, its own turf…nay, its own blend of folksy melancholy Irish rage and despondency + McDonagh-ass weirdness and perversity. My heart aches for Sasha’s furry friend and lover but not for Brendan Gleeson’s bloody stumps.

I for one have never once shut anyone out because they disliked a film that I’ve loved. I’ve been hurt, disappointed or saddened that a friend didn’t share my love for a film, but I’ve always shaken that shit off. Sometimes people love and hate films for odd reasons. There’s no figuring it.

If you’ve just seen Raoul Walsh’s They Died With Their Boots On, which opened on 12.21.41, you’re allowed to love or hate it for reasons that have only to do with the merits or demerits of the film. Your feelings about your father or kid brother having been killed during the bombing of Pearl Harbor two weeks earlier…well, you can conflate or separate these disparate events as you see fit, but they’re really not related.

Carl Foreman’s The Victors opened in the vicinity of 11.22.63. Some might have seen it that day or during the weekend (11.23 and 11.24) and they might have said “Dear God, the blood and horror and absolute cruelty of war as imagined by Foreman is forever merged with the blood and horror of what happened in Dealey Plaza during lunch hour!” And they wouldn’t be wrong to have this reaction, but if a person wanted to express a reaction to the film and ONLY the film, they would be within their rights. And I certainly wouldn’t fault them for this, even if I was Robert F. Kennedy.

Yes, sad or traumatic events have a way of bleeding into each other or into films that we’ve just seen or music that we’ve recently been touched by…I know all about that bleeding-through process. But you have to show a little discipline in these matters, and sometimes you have to be hard.

Last night Quentin Tarantino, who divides his time between Tel Aviv and the U.S. of A about “60-40,” talked about his 30-month-old son Leo with Jimmy Kimmel, and called him “the audience member I’ve waited for my entire life.” Great stuff. Tarantino was plugging his next book, “Cinema Speculation,” which pops on 11.1 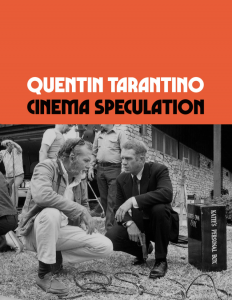 Obviously the facts need to emerge, but this feels analogous to the matter of Nicholas John Roske, the 26 year-old California man who threatened the life of Supreme Court Justice Brett Kavanaugh with a gun early last June. Citing an affadavit, The Washington Post reported that Roske “decided to kill the justice and then himself, thinking it would give his life purpose.”

Throw in the attempted kidnapping of Michigan governor Gretchen Whitmer in late 2020 and you’re left with a suspicion that acts of anti-left or anti-right violence have almost become par for the course, certainly since 1.6.21. From a certain perspective these are the isolated provocations that may lead to an actual woke wackos vs. militant righties Civil War. Some believe this is right around the corner.

Four days before the Donald Trump-incited assault on the U.S. Capitol, Pelosi’s San Francisco home was vandalized (on or about January 2, 2021).

After debuting last May in Cannes and hitting several film festivals and opening worldwide over the last three or four months, Marie Kreutzer‘s Corsage (IFC Films) will open stateside on 12.23 — one of the last significant commercial bookings.

“Royally Uninterested,” posted on 5.20.l22: “I regret reporting that Corsage, which screened at 11 am this morning, didn’t sit well. I found it flat, boring, listless.

“The Austrian empress Elizabeth (Vicky Krieps) is bored with her royal life, and the director spares no effort in persuading the audience to feel the same way.

“Krieps plays up the indifference, irreverence and existential who-gives-a-shit?.

“Somewhere during Act Two a royal physician recommends heroin as a remedy for her spiritual troubles, and of course she develops a habit. I was immediately thinking what a pleasure it would be to snort horse along with her, or at least during the screening.

“Corsage is unfortunately akin to Pablo Larrain‘s Spencer and Sofia Coppola’s Marie Antoinette — stories of women of title and privilege who feel alienated and unhappy and at a general loss. I’m sorry but this movie suffocates the soul.

“In actuality Empress Elizabeth was assassinated in 1898, at age 51. For some reason Kreutzer has chosen to end the life of Krieps’ Elizabeth at a younger point in her life, and due to a different misfortune.

“This is one of the most deflating and depressing films I’ve ever seen.” 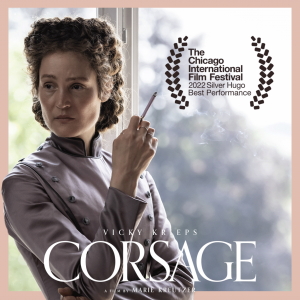