I meant to comment about Sunday’s duelling Snow White movie ‘Power Grid” posting by TheWrap‘s Josh Weinstein, but I’m only just getting around to it now. If I was Hollywood’s moral-aesthetic emperor with absolute power and a terrible swift sword with no responsibility to deliver profits, I would shut both of these projects down immediately without the slightest hesitation, and I would order the supporters and financiers of these projects at Universal and Relativity to take two-year nature sabbaticals in Africa or Antarctica, or go to Japan and help with the radioactive clean-up. 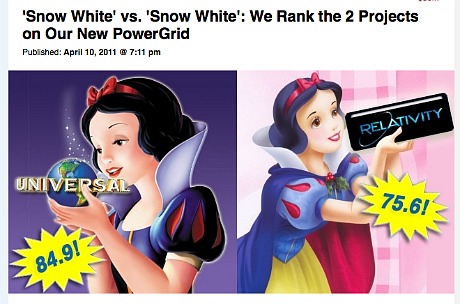 Why? Because the idea of not one but two Snow White movies with big stars coming out in 2012 is completely sickening. Because they’re only being made because adaptations of games and comic books and fairy tales (plus sequels) are pretty much the only things that families and under-30s are willing to pay to see on opening weekends, and are therefore the only things being green-lighted by the studios these days. Because they’re the latest metaphors for the all-but-total-collapse of courage and imagination and creative pizazz in Hollywood production circles. Because they’re both going to be movie-movies that will carpet-bomb viewers with over-acting “in quotes” (a la Johnny Depp‘s Mad Hatter in Alice in Wonderland). And, I’m guessing, because they’re going to be made without the slightest trace of emotional sincerity. Air quotes, air quotes, air quotes all the way.