Having premiered a week ago at the Venice Film Festival, Edgar Wright‘s Last Night in Soho (Universal, 10.29) screened last night at the Toronto Film Festival. A cool and sexy time-trip ride during the first hour (visually mesmerizing, transporting ’60s pop tunes), but then it devolves into horror…WHAT ELSE?

Welcome once again to the realm of Edgar Wright, a gifted director with a geek maestro sensibility that always gets the better of him.

World of Reel‘s Jordan Ruimy: “It’s a very silly movie. Wright’s strongest work is still Baby Driver if you subtract the last 20 minutes, when it goes off the rails.”

HE: “Agree about Baby Driver. I know that I’ll never, EVER trust Jason Gorber’s opinion about any Wright film.”

JR: “Soho has a strong first hour. First half is pure pleasure. An amazing swinging ‘60s soundtrack. You live and breathe the setting. But then it devolves into infantilism.”

HE: “I could tell that from the trailer.”

JR: “He’s such a gifted visualist but can’t seem to let go of his obsession for more, more, MORE.”

JR: “The twist is idiotic. Wright goes for wokeness. More or less a #MeToo horror revenge film. It’s a mess.”

Excerpt of 9.4.21 Venice Film Festival review by Variety‘s Guy Lodge: “Wright’s murky, middling blend of horror and time-traveling fantasy briefly makes the heart quicken. Otherwise, Last Night in Soho is a surprising misfire, all the more disappointing for being made with such palpable care and conviction.

“Wright’s particular affections for B-movies, British Invasion pop and a fast-fading pocket of urban London may be written all over the film, but they aren’t compellingly written into it, ultimately swamping the thin supernatural sleuth story at its heart. Which is to say that Wright has lovingly made “Last Night in Soho” for himself and…well, it’s not clear who else.

“Juvenile characterizations and plotting lean into YA territory while a few grisly spurts of sex and gore suggest otherwise. There’s a feminist undertow to its study of young women manipulated and misled by toxic masculinity, but the female characters themselves are blandly imperilled cyphers.

“Earlier comic trappings give way to a more sustained, serious-minded exercise in spooking the audience, but horror-heads are unlikely to find it particularly scary. (Never mind, it wasn’t very funny to begin with either.) At a certain point, even the period music cues prove uninspired, albeit a consistent pleasure to listen to.” 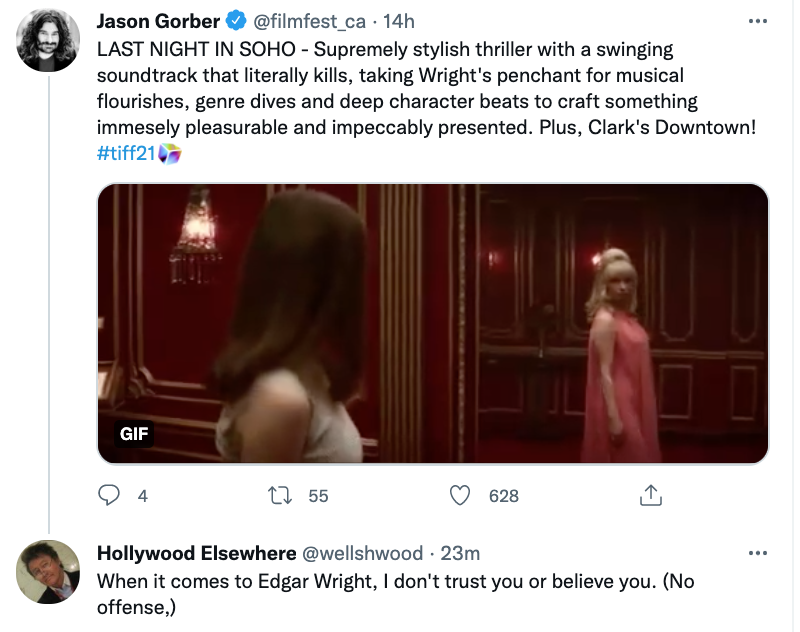