I for one didn’t revisit Fatal Attraction on the occasion of its 30th anniversary, which happened three and a half years ago (9.16.17). But others have in the interim, and the #MeToo view is basically that even though Glenn Close‘s Alex Forrest was damaged and unstable and jumped the gun as far as Michael Douglas‘s Dan Gallagher was concerned, she was coming from a no-bullshit emotional place, and she had a point.

Gallagher, a married attorney, saw an opportunity for some hot recreational sex (the kind that married people generally don’t have as a rule) and a brief revisiting of his hormonal hound-dog past with an enticing woman while his wife was out of town, and he went for it.

But almost right out of the gate Forrest began asking him why he was cheating. In some corners the new thinking is “was Alex really so wrong to want something real from the guy? She wasn’t some predatory psycho — she was hurting and off-balance, agreed, but it was the mid ’80s, she was 36 years old and she didn’t want to be treated like a sex poodle. She was simply putting her cards on the table.”

Hollywood Elsewhere re-watched Fatal Attraction two or three nights ago, and here’s the basic deal, #MeToo or not.

Forrest was way out line to even fantasize that a weekend (36 hours, give or take) of great sex and spaghetti and opera and more sex plus a suicide attempt…she was way out of line to think that there was even a slight basis for a serious extra-marital affair between herself and Gallagher.

The rules are the rules, and everyone knows that the first night or two of sex between consenting adults is strictly about sensual abandon and intoxication…under the best of circumstances and with the right person the initial stages of a sexual escapade can be a glorious and ecstatic escape from the regular grind of living and working and carrying the weight of it all.

And this rule goes double if not triple if one of the parties is married. In such a situation there’s always an assumption that this is strictly a one-timer or a one-weekender…all sane adults understand this.

If, on the other hand, the affair continues and the married man or woman becomes more and more attached to the non-married lover or vice versa, then it’s cool for the unattached person to ask “what are we doing exactly? Because I’m not into recreational, gymnastic sex for its own sake…I’m interested in having a real-deal relationship with someone I truly care for so where are we exactly?”

That kind of conservation is completely normal and par-for-the-course after the affair has been going on a while. But you can’t broach the subject after only a night or two. That’s crazy — totally bonkers.

Which is why Gallagher froze and said “oh, shit” to himself at the 42-second mark in the above scene, or right when Forrest said “so what are you doing here?” 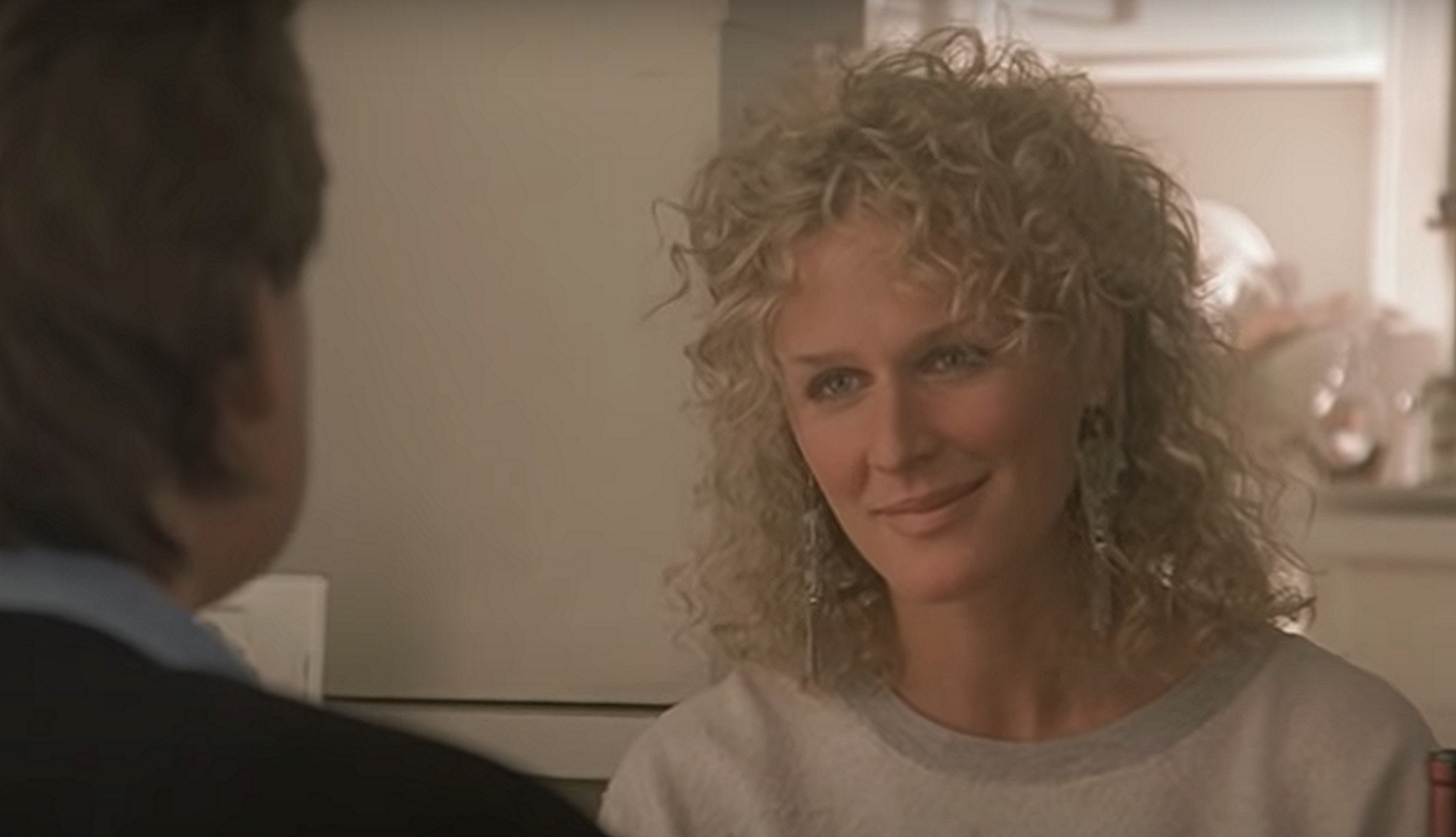 That was the inciting moment — the moment when Alex laid her cards on the table and began saying to Dan, “Don’t look now but I’m crazy and you’re fucked”. And Dan knew he was fucked.

It was the moment when Alex effectively told him “because we’ve had sex two or three times, you owe me everything from here on — tonight you need to go home, pour yourself a calm cup of coffee and think about divorcing your wife and child and becoming my lover and partner as we raise our child together. Because we gloriously made love and went dancing and frolicked in Central Park over the last 36 hours we are hereby joined into eternity…Dan and Alex forever! And if you don’t I’ll kill myself like Madame Butterfly.”

“At its core, Fatal Attraction was a deeply unsubtle metaphor about professional women’s destruction of the traditional family unit. It was also part of a blatant cinematic backlash against career women that sent the message that women were obsessive creatures, utterly incapable of having casual sex, leaving men alone or handling rejection. It was ‘Hell hath no fury like a woman scorned’ writ larger than ever before.

“Critical reception was mixed at the time — a New Yorker contributor wrote that Adrien Lyne’s film was “about men seeing feminists as witches, and the way the facts are presented here, the woman is a witch.” Audiences absolutely reveled in watching the destruction of Alex. Movie theaters famously reported that some viewers were engaged to the point of shouting ‘kill the bitch!” at the film’s climax.”

That steaming-bathroom climax plays even crazier today. I couldn’t keep myself from chuckling when it happened — it was complete horseshit, and I was chortling out loud at the absurdity of Forrest having suddenly become a totally-around-the-bend, knife-slashing madwoman…a female Jason Voorhees on the warpath. I’m not a fan of the original ending either — it doesn’t feel right or satisfying that Gallagher/Douglas would get arrested for slitting her throat when in fact she committed suicide. So I don’t know what I would have done if I was Adrien Lyne.