“To The Media, The Smell of Money Is Not Odorous — It’s Pleasant”

There’s an anecdote in David Handleman‘s 1985 California piece about Terrence Malick (titled “Absence of Malick“) that has always amused me. It’s a brief recollection about Malick having landed a New Yorker assignment in the late ’60s to write a piece about Che Guevara, and his having travelled to Bolivia to research it. But he over-researched it, Handleman wrote, and “got drowned in it, and never turned [the piece] in.” 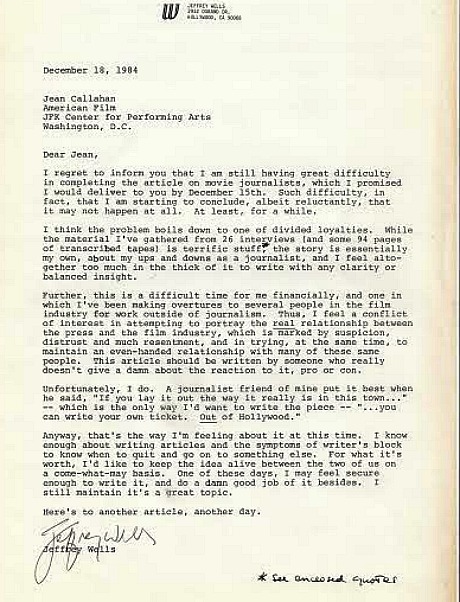 The story was amusing because I did the same damn thing in ’84. I had pitched an article to an American Film editor, Jean Callahan, about the inner lives of film critics — who they were deep down, what had lit the initial spark, what drove them on, whether they’d become corrupted by their access to film industry titans and were nursing dreams of becoming screenwriters or producers.

For a while I called it “The Outsiders”; I also called it “The Big Fix.” I knew it had the makings of something really good. So I talked to many, many critics and transcribed the interviews and wound up with at least 25 or 30 pages of single-spaced pages, all typed out and corrected with side notes and thoughts about structure and whatnot.

I got into it more and more, and it became a small mountain. And then a bigger one. And then it became quicksand and I began to sink into it. The feeling of having gotten myself into this kind of trouble was awful. I was unsure about whether to keep trying or to forget it and walk away. I felt like I was covered in glue or tar. I finally gave up. The guilt was agonizing. I’d never worked so hard on something to no avail.

Today I came upon a letter — a confession of defeat — that I sent to Callahan in December of ’84. The letter was sitting in a manila folder in the bottom drawer of a small wooden chest filled with magazines from early to mid ’90s. It was mortifying to write and certainly to send.

But at least the experience taught me three things.

One, never churn out that much research about a single topic ever again without writing anything down — write as you go along. Two, forget about big subjects and grand designs — always choose a topic that appears to be small or smallish and then make it bigger or richer with your interpretation of it. And three, always listen to what people say and let that material point the way.

The title of this piece is a quote from the late Stuart Byron, former movie columnist for the Village Voice and development exec for producer Ray Stark. In ’89 or thereabouts I briefly partnered with Byron in a venture called re:visions, which was about analyzing the problems of screenplays that had gotten stuck in development and weren’t going anywhere. 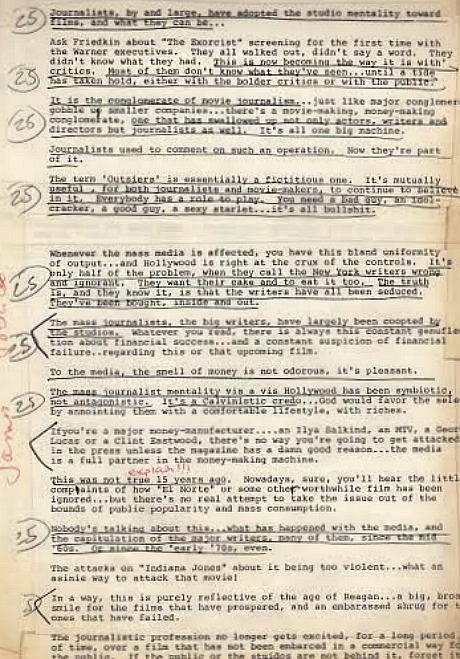