“Interesting to read about Scientologists buying tickets in bulk for Mission: Impossible III. I spoke to a theater manager in Three Rivers, Michigan — the kind of town where something like M:I:3 should be doing solid business — and he said he and his staff couldn’t believe how poorly the film did last weekend. ‘I don’t know where they made that 48 million,’ he said, ‘because we never had more than 30 or so people at any one show.’ He said the movie made ‘maybe’ $3000 for the weekend. Although everyone he talked to who saw it enjoyed it, he had also heard from many people who said they were ‘sick of seeing [Cruise]’ and under no circumstances would they be going. The poor guy — the theatre manager — is now crossing his fingers and hoping for a box-office lift this weekend from Posedion and Just My Luck.” — James Sanford

Being a fan of director Roger Michel and screenwriter Hanif Kureishi, who last collaborated on The Mother (2003), I’m quite interested in seeing their latest, Venus. It costars Peter O’Toole (who’s said to give an elegant and spirited performance in it), Leslie Phillips, Richard Griffiths, Vanessa Redgrave and Jodie Whittaker . Miramax has the U.S. distrib rights for the London-based drama, which is being described as “a wry, affectionate coming of very-old-age story.” (It’s partly about active libidos among the over-70 set.) Venus is being test-screened in Manhattan Thursday night but I’m going to have trouble making that one, so I wrote McDonald + Rutter, the London p.r. firm, and asked about any Cannes market screenings that may be happening. “We don’t know of any market screenings” and “it’s still in post-production,” I was told. Of course, if ,em>Venus ios being test-screened in New York City two days from now and they’ve already test-screened it in Covent Garden in late April, it’s very close to being finished and of course they’ll be be showing it at a market screening or two in Cannes. If anyone can tell me about any happening during the festival, please get it touch.

The strangest news of the day is that of all people, F.X. Feeney, easily one of the most brightest and most insightful film critics of our time (as well as a top-grade screenwriter and all-around human being), has provided feature-length audio commentary on the just-out DVD of The Towering Inferno. I love many aspects of this film (I’m especially fond of Steve McQueen’s performance as “the fireman,” as well as the scene when Jennifer Jones falls to her death) but it’s odd for a guy of Feeney’s depth and cinematic compassion to be doing this. Why is he talking on a Fox Home Video DVD of a crass Irwin Allen film that’s basically focused on people burning to death or falling to their deaths from an absurdly high skyscraper? Feeney “rambles amiably and very informatively throughout all 160 minutes of the flick’s running time, and he focuses on everything from the cast to the FX to the controversies, stopping occasionally to point out something clever about the film’s editing style or production design,” says DVD Talk’s Scott Weinberg, who says that “this is one of the best ‘historian tracks’ I’ve heard in the past few years…great, great stuff.” Congrats to F.X., but he should be riffing about films of greater substance.

The view on the street — my temporary street in Brooklyn, I mean, where men and women of proletariat substance hang out and shoot the shit — is that David Blaine is a man of honor and astounding bravery, even though he technically failed in his breath-holding stunt yesterday. Blaine is said to be upset that he let his audience down; he didn’t. 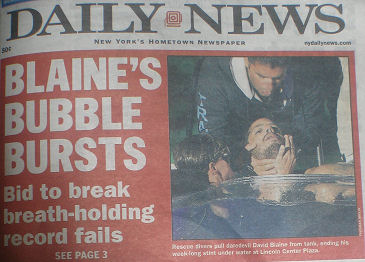 A piece by Jacques Steinberg in the N.Y. Times about the mostly subtle alterations that have been made to The Sopranos for its upcoming basic cable run on A&E. But who in their right mind would prefer to watch this classic series on A& E rather than simply rent or buy past seasons on DVD and watch them at will? I don’t get it.

“The miniature work” in Ronald Neame and Irwin Allen‘s The Poseidon Adventure (1972) “as the ship is overturned by a 50-foot tidal wave is magnificent,” says N.Y. Times columnist Dave Kehr in his review of the just-released double-disc DVD. Magnificent isn’t the word for the footage of a slow-mo, Nixon-era bullshit “wave” as it engulfs a an obviously modest-sized ocean liner that was about 21 feet long in actuality. (I wonder if Kehr believes that footage of this rowboat-sized craft puttering along the surface of a studio tank during the opening credits is magnificent also? If you don’t believe me, check out this fansite and look at the stills of the 21-foot long ship inside the tank.) “It will be interesting to see how it stacks up to the computer-generated special effects of Friday’s remake,” says Kehr. You would expect, naturally, that 34 years of technical advancement in visual effects would make the effects in Wolfgang Petersen’s Poseidon way more sophisticated. And they are that.

There’s a significant comment in this Indiewire piece about Polly Cohen‘s stepping into Mark Gill‘s recently-vacated job as president of Warner Independent. It comes from WB production chief Jeff Robinov when he says that “the unit will pursue genre films, which it hasn’t released in the past.” Does Robinov mean genre films by way of Dimension or lionsgate or Screen Gems, which is to say schlock fantasy-horror with teenagers getting eaten or stabbed or chain-sawed to death? I don’t think Robinov means smarty-pants genre films…I think he means he wants Warner Independent to make some money by pandering to the repressed sex-death fantasies of cretin-class under-25s. The mind reels at the idea of the gentle and delicate Laura Kim applying her marketing skills to the selling of some forthcoming Warner Independent bucket-of-blood teen slasher pic.

I don’t feel good about copying anything from WENN, but Audrey Tautou‘s (alleged) comments about her playing opposite Tom Hanks in The DaVinci Code were precisely what I was thinking when I first heard of her casting. The piece says she was on holiday in Mexico when she was first contacted by director Ron Howard to play the part of Sophie, and that she “refused to go to LA and screen test opposite Hanks, as she felt too young to play the part.” But Howard “was determined to have her in the film. WENN quotes Tatou as saying, “I didn’t refuse to see [Howard]. He was doing one day of casting where he was going to meet everyone, but I was in Mexico and I said it’s not even worth it for me to go. I didn’t see how it could work. I thought this character had my strong-mindedness but it didn’t go further than that. And I thought at 27 that I was a bit too young when Ron contacted me. To me, Sophie was older.” Precisely! It was my feeling from the get-go that Sophie should have been played by Julie Delpy. Not only is the 36 year-old Delpy more age-appropriate for the 49 year-old Hanks, but, unlike the situation with Tatou, Hanks doesn’t appear to outweigh her by 70 or 80 pounds.

With today’s hurried theatrical-to-DVD transitions, it’s interesting to consider a situation that may affect Sofia Coppola‘s Marie-Antoinette, which will open in France and Belgium on 5.24.06 — 15 days from now — but not until 10.13 in the U.S. It’s entirely possible, you see, that the film will be out on DVD in France before it opens in the States. (I don’t know that this will happen for sure, but DVD releases usually occur within four to five months of a theatrical debut.) The historical drama-with-New Order-music-on-the-soundtrack will open in England on 9.8.06. 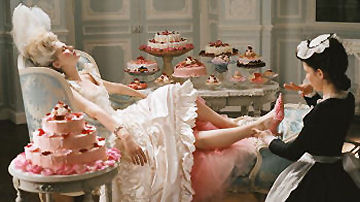 Oh, and since I excerpted a negative review from a French film critic earlier, here’s a 4-star positive review from another Frenchman…although it’s all in French and the image doesn’t allow me to copy and paste it into Google’s translation tool. I don’t know if the author, Philipe Paumier of Cine Live, is a smart-tough critic in the Glenn Kenny mold or more of a Peter Travers type. I suspect the latter, but if anyone knows his work… 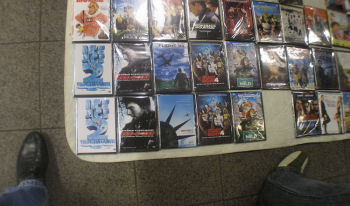