I presume the rights have already been optioned or bought, but here’s an ideal source for a very strong, possibly very commercial and perhaps even award-calibre Ziyi Zhang movie that could be theoretically helmed by Ang Lee or Wong Kar Wai. It’s basically an emotional wartime diary, initially serialized in newspapers and recently published in book form, about a real-life North Vietnamese female doctor named Dang Thuy Tram who was killed at age 27 on a Vietnam battlefield in 1970. Seth Mydans‘s Herald Tribune article doesn’t mention the title (weird), but the diary has become a best-seller in Vietnam, and if the right people produced the movie version it would have a potential to be a major emotional journey for Americans also, partly because of the lingering guilt factor over Vietnam. With the right chops, it could become a critics’ darling, an art-house hit and perhaps even an Oscar contender. Mydans’ article describes it as a tale of “love, loneliness and death on the Ho Chi Minh Trail.” [Tram], he reports, “was killed in an American assault after serving in a war zone clinic for more than three years. The combination of revolutionary fervor and the vulnerabilities and self-doubts of a too-sensitive young woman might be called ideology with a human face, reminding readers that it was people like them, trapped in a moment of history, who died on their behalf.” The journey of the diary itself, he writes, “has given it a special postwar symbolism for [the Vietnamese]. It was returned to [Tram’s] family just last year by a former American soldier who recovered it” on the battlefield where she died. I don’t disagree with reader Daniel Zelter‘s view that “after Memoirs of a Geisha, Ziyi’s had enough of faking Asian roles different to her own background. But here’s a brilliant idea — why not have a Vietnamese girl play the part?” I mentioned Ziyi mainly because she resembles Dang Thuy Tram’s photograph (scroll down a bit…it’s there), and of course because she’d presumably sell more tickets than a Vietnamese actress would. That sounds coarse, doesn’t it?

I didn’t get to see all the highly-rated Cannes films, but for what it’s worth I agree completely with L.A. Times film critic Kenneth Turan’s statement that “perhaps the best of the slighted films [among the Cannes Film Festival award-winners]” was Guillermo del Toro‘s Pan’s Labyrinth. But as del Toro told me last Thursday evening, Labyrinth‘s accomplishment was simply being shown in Cannes, given the snobbish attitudes that have long prevailed about films with fantasy-and-FX elements, and that a possible award was never realistically in the cards. “The winners have already been spoken for,” del Toro declared. Turan, by the way, has made a small error in describing del Toro as “the Mexican writer-director of Chronicles and The Devil’s Backbone .” Del Toro was one of five producers of 2004’s Chronicles (better known as Cronicas), but he wrote and directed 1993’s Chronos, a masterful vampire film that I presume Turan was referring to. I also wonder about a quote in Turan’s piece from Cannes Jury chief Wong Kar Wai, which is that Ken Loach‘s The Wind That Shakes the Barley “was the unanimous choice for the top prize” — i.e., the Palmes d’Or. I share the same view that Hollywood Reporter columnist Anne Thompson expressed last Sunday night: “I suspect that the jury locked over Babel vs. Volver and wound up giving the Palme d’Or to eight-time competition entrant Ken Loach, who had never won the big prize.” 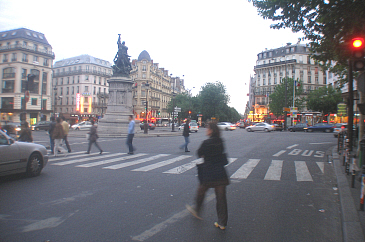