“I have always had a voice and always known I could sing, but I was too shy to let it come out. I think that is the hardest thing you can do, to sing in front of people. When I finally let go and did it, I realized it is what I am most talented at and what I love to do the most” — Paris Hilton

There are more to movies than just form — content counts for a lot. I could list 100 well-regarded movies off the top of my head, docs and features alike, that you could arguably call boring or so-whatty in the way they’re shaped and/or paced, and yet they’re compelling as hell because of the current inside them. And yet here’s a columnist saying Al Gore and Davis Guggenheim‘s An Inconvenient Truth is “boring” and “not a movie“, “feels like it was pretty much assembled, not directed“, “Castor Oil is good for you…but that doesn’t make it taste any better” and so on. Sam Fuller often said the essence of a good movie is emotion, and it stuns me to consider that some can see Truth and just not feel it. As the Guardian‘s Jonathan Freedland put it in today’s edition, this film is “extraordinarily gripping…those who have known the arguments [about global warming] for years, intellectually, suddenly find themselves moved emotionally by Gore and stirred into action.” An emotional response to a portrait of a world being climactically suffocated and only ten or fifteen years shy of total devastation is not required of anyone — by all means, fly your blase flag, it’s a free country — but honestly… 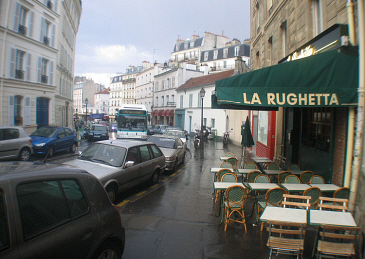