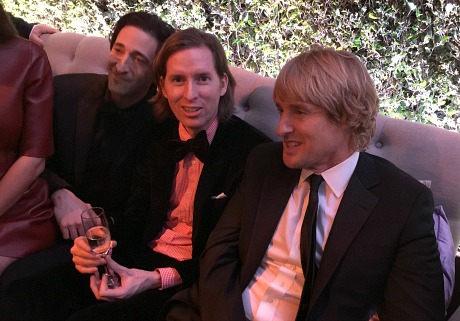 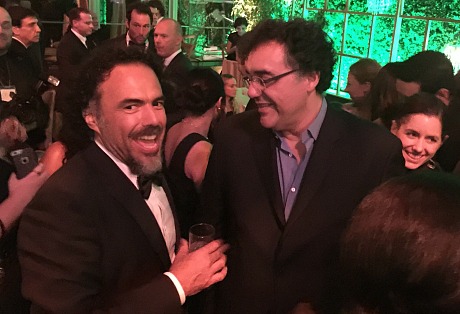 8:00 pm: Boyhood wins Best Motion Picture, Drama. IFC Films’ Jonathan Sehring on the mike. Gang’s all up there. All in. All over.

7:46 pm: Shocker win for Grand Budapest Hotel…but very cool at the same time. Hooray for Wes Anderson and the gang. Easily the biggest upset of the night.

7:33 pm: Birdman‘s Michael Keaton wins for Best Actor, Comedy/Musical. “I’m extremely grateful.” I hate tapping this out on the damn phone. MacBook Air battery down to 23%.

7:19 pm: George Clooney‘s acceptance speech for Cecil B. DeMille award will be…well-written. It was well-written! And well delivered. We all forgive him for Monuments Men. “Thanks for helping to keep small films alive.” “If you’re in this room, you’ve won the brass ring.” “We will not walk in fear…we won’t do it…je suis Charlie.” Hey, he didn’t pronounce it “SharLEE”!

The Golden Globe party tents (including the 20th Century Fox viewing tent, where I’m typing this from) are surrounded by a sea of mud. A couple of hundred yards from the main ballroom, if that, and it’s all gooey, sloshy, slithery muck. It’s warm and dry inside the Fox party…elegant design, not too crowded, only the coolest…uhm, the most aggressively cool people. Smiling waiters darting around with all kinds of hors d’oeuvres. Wait…the show is starting. 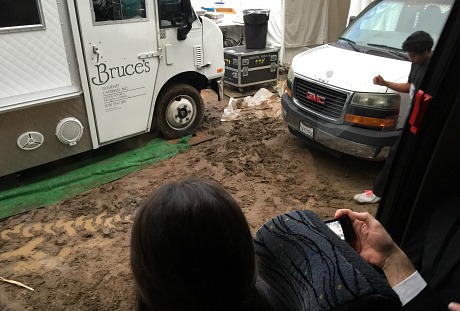 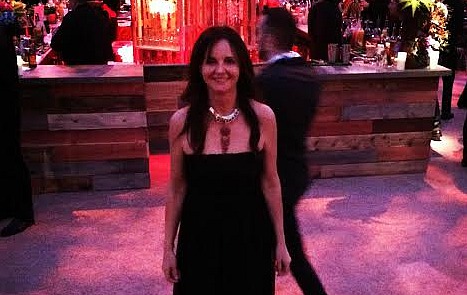 4 Comments
Surrounded by Persons of Depth, Spirit and Accomplishment

Hollywood Elsewhere is leaving for the heavily-fortified garrison state known as the Beverly Hilton complex about 65 minutes from now. I’ll be live-blogging the Golden Globe awards starting at 5 pm, or as best I can from a viewing-party cocktail table What are the biggest possible upsets? I would be totally on-the-floor flabbergasted if Wes Anderson‘s Grand Budapest Hotel takes the Best Motion Picture, Comedy/Musical award away from Birdman, which some are suggesting could happen. I don’t expect that Cake‘s Jennifer Aniston will abscond with Julianne Moore‘s Best Actress, Drama award for her performance in Still Alice, but if this happens people will scream and howl and break champagne glasses. Selma‘s fate is, of course, already set in stone as far as the Oscar nominations are concerned, but if it wins the Best Motion Picture, Drama award tonight (which I believe is unlikely) and if it lucks out with a Best Picture Oscar nomination next Thursday morning (and the signs are not good for that either), people will start saying that Selma‘s shadow-over-LBJ stigma (i.e., having screwed the 36th President out of his proudest accomplishment in the eyes of impressionable none-too-brights who wouldn’t open a history book or consult a Wikipedia summary if their lives depended on it) has been lifted.

The source of HE’s strength has always been the quality of the eyeballs (industry, media, ubers, early adopters) and not the general across-the-board numbers. But of course that’s all the ad-agency crunchers pay attention to and so they give HE arguments about this from time to time in terms of ad rates. It’s been suggested that I should dumb things down a little bit in order to punch up the page views. One of my proudest distinctions is having never once run one of those number-driven stories in which the headline says “10 Movies That You Probably Won’t Want To See in 2015” or something along those lines, so I guess I could start, you know, running those two or three times a week. If Hitfix can run these kind of stories why can’t I? I’m kidding. Seriously, what can I do to appeal to the Walmart-level ADD crowd?

Poor Anita Ekberg reportedly had a rough financial time during her last few years, and now she’s passed at age 83. Kindness and respect. But honestly? If it hadn’t been for that thigh-deep wading scene at Rome’s Trevi Fountain in Federico Fellini‘s La Dolce Vita (’60) her life probably would have been a bit more difficult as almost everything else she acted in was either negligible or embarassing. Ekberg enjoyed a four or five-year buildup to this career-peak moment, landing a Hollywood contract when she was 23 or 24 and snagging parts in Blood Alley (’55), Artists and Models (’55), Hollywood or Bust (’56) and War and Peace (’56). Post-La Dolce Vita she costarred in Boccaccio ’70 (’62) and then almost got Ursula Andress‘s role in Dr. No. Next she did the dispensible Rat Pack comedy 4 for Texas, and then gradually descended into European exploitation. Her last two noteworthy films were Fellini’s I Clowns (’72), and Intervista (’87) — she and Marcello Mastroianni played themselves in the latter.

Point #1: A majority of U.S. publications have decided against re-publishing the satiric illustration of Prophet Muhammad that led to the Charlie Hebdo massacre, and the reason for this timidity was indicated by today’s attack upon Hamburger Morgenpost, a tabloid daily in Hamburg that ran it. Honestly? I wouldn’t have if I was an editor of a daily or weekly dead-tree publication. Why taunt the nutters? R. Crumb‘s half-ass, kinda-sorta-kidding solidarity with fellow cartoonists illustration is probably more reflective of what most editors are thinking. Point #2: I hate the way Amurricans always manage to mispronounce the French language in little ways. It’s not Charlie as in Charlie Kaufman and it’s not Hebdo as in hedge row — it’s SharLEE HebDOH. 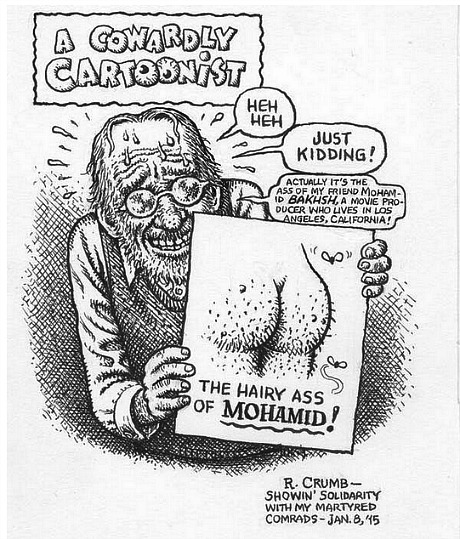